The Story Behind the Legend of El Dorado 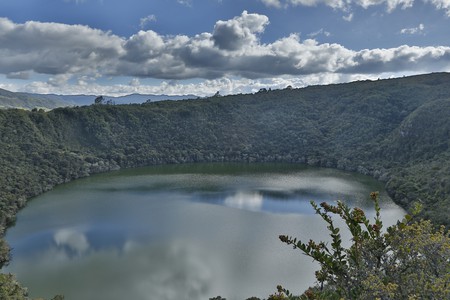 South America is full of mystery, legends and mythical stories – nowhere is this more true than in Colombia, where one of the most widespread legends is that of El Dorado. Referred to as a chief, city and empire at various points throughout history, this is a legend that has been passed down through the generations. Here’s our guide to everything you need to know about Colombia’s fascinating past.

El Dorado was a term first used by the Spanish Empire to describe the mythical chief of the Muisca tribe which inhabited the Andes region of Colombia, in the highlands of Cundinamarca and Boyaca. The Muisca tribe was part of the big four tribes of the Americas (Aztec, Maya, Inca and Muisca) between 800 and 500BCE.

The legend of El Dorado dates back to the first published writing referring to the legend in 1638, when writer Juan Rodriguez Freyle wrote “El Carmero”, which included an account of a sacred ceremony. According to Freyle, the ceremony of El Dorado states that before a individual is allowed to become the tribe’s chief, they have to first spend time in a cave, without salt products, or being able to leave. The first journey they ventured on thereafter was to Lake Guatavita, to take part in a offering ceremony. In this ceremony the tribes would make offerings and sacrifices to the demon, in who they worship as a god and lord.

It is believed that during this ceremony the chief-to-be stood on a raft, decorated with the tribe’s most attractive offerings. The chief was covered in gold dust and set on the raft with gold and emeralds – the raft was then pushed off from the shore and the offerings were thrown into the water in the middle of the lake. This symbolised a new ruler being initiated, and was from thereon in received as lord or king. 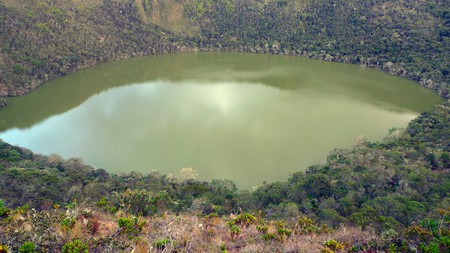 This story had been told over many years and in many different guises, but the published evidence of the story made Spanish invaders believe it was true, and it inspired many explorers to search up and down the country looking for the mystical lake. In 1537, Lake Guatavita was discovered by Gonzalo Jiménez de Quesada, while searching the country for gold. As it turned out, a large amount of gold was discovered in and around the lake, backing up the stories and tempting others to search the country for more of the same, with three attempts to drain the lake taking place in 1545, 1580 and 1898. The final attempt was carried out by a British explorer named Hartley Knowles, whose expedition team successfully drained the lake less than four foot deep, but the muddy and slimy bottom made searching for gold impossible. This was not helped by the sun which dried up all the mud and turned it into concrete. In time, the lake was made a National Heritage site in 1965, and gold searching, draining and exploring became illegal.

The Spanish were so amazed by the truth in the story that it prompted them to further search for a city or village, where they believed the tribal gold was kept – a belief highlighted by the fact that maps had been discovered leading to a lost city full of gold. Many Spaniards spent years searching but they never discovered the city, though the search for the lost city of El Dorado continued for years before explorers gave up.

Today a large amount of gold found in Lake Guatavita is showcased along with a gold raft, complete with offerings and an chief are displayed within the Gold Museum in Bogotá‘s historic centre. 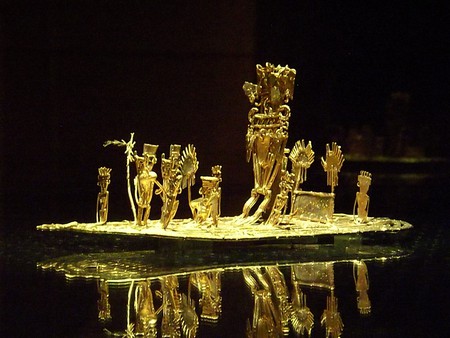