The Most Exciting New Bands in Bogotá, Colombia 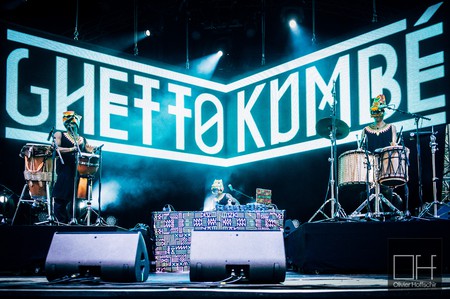 Colombia is a musical melting pot of genres, instruments, and artists. Indeed, with the country’s incredible cultural diversity comes a wealth of amazing music inspired by folkloric styles, modern sounds, and global genres. And this is an ongoing phenomenon as well, as there are some incredibly exciting new artists in Colombia right now making fantastic music. So here are the most exciting new bands in the country’s capital that you should know about!

A musical project once described as ‘a journey to the rhythmic Afro-Caribbean roots of Colombia fuelled by the hypnotic power of African house beats’ by Sounds and Colours, the members of Ghetto Kumbé fuse traditional Afro-Colombian percussion with intense electronic beats and samples. They have a particularly strong band aesthetic: neon tribal masks and outfits are a particular standout of their intense live show. Originally made up of three members – percussion wizard Chongo de Colombia, Edgardo Garcés, a.k.a. El Guajiro, and Andrés Mercado, a.k.a. Dr. Keyta – Chongo has since departed to pursue his other, equally wonderful, musical projects. However, if their recent single ‘Eso no me falla’ is anything to go by, their upcoming second EP, Soy Selva, will be an absolute stunner!

One of the most exciting up-and-coming bands in Bogotá, La Tromba Bacalao is what happens when a group of school friends who are equally in thrall to the sounds of cumbia and vallenato as they are to heavy rock form a band! With just one single – the incendiary and intense cumbia hellscape of ‘Maicao’ – to their name so far, the band is a fixture on the Bogotá live music circuit; when you travel to the Colombian capital, seek out one of their gigs if you can. Their live show is rightly garnering plaudits for its intensity, and with an upcoming album in the works, there are big things to come from La Tromba Bacalao.

A new musical project consisting of members from the aforementioned Tromba Bacalao and popular rock band Oh’laville, La Sonora Mazurén plays Chicha music – the name of a style of Peruvian psychedelic cumbia music that rose to popularity in Lima in the 1960s. A largely instrumental project, a Sonora Mazurén gig is an immersive experience, propelled by the hypnotic style of the music and an incredible light show. With an official upcoming release planned, La Sonora Mazurén is another band with a bright future in Colombia.

La Perla has been playing music together since 2014, but they just released their first EP, the excellent Paren la Bulla. Describing their music as a mixture of bullerengue, cumbia, Dominican merengue, Gaita and champeta criolla, La Perla is currently made up of six Colombian women, all of whom are self-taught students of Colombian folkloric music and Caribbean musical genres. Their music moves to the propulsive rhythms of the Colombian Caribbean coast and is the perfect example of how contemporary Colombian artists are taking traditional Colombian sounds and instruments and creating new and exciting songs.

KoKodrilo was born in 2016, as a result of guitarist Sebastián Carrizosa’s determination to create a musical sound which accurately reflected his diverse musical tastes and experiences. A quick glance at their influences – which include The Clash, Anibal Velasquez, Crass, Sonic Youth, Lucho Bermúdez, and Willie Colón – on their website is surely enough to excite any musical polymath. There surely aren’t many bands seeking to find the point between 70s Nuyorican salsa and the London Punk scene! The sound they have created from this melting pot of influences is unlike any other in the already diverse modern Colombian music scene.

While not technically a ‘new’ band – La BOA, or Bogotá Orquestra Afrobeat (Bogota Afrobeat Orchestra), have released collaborative albums with legendary Colombian singer Nelda Piña for years now – La BOA has just released their first ever ‘solo’ record, the remarkable Volumen. With funky guitars, marimbas, soulful vocals from guest artists, including Piña and Nidia Góngora, Volumen is a boundary-pushing modern take on Afrobeat music, and easily one of the best Colombian albums of the year!

El Leopardo treads a fine line between new artist and one-off collaboration. However, if their recent debut single – an eponymous fusion of techno and traditional Colombian percussion – is anything to go by, music fans will surely be hoping that legendary Colombian electronic artist Dani Boom and Chongo de Colombia find time to produce more music as El Leopardo in the future. Released on Polen Records at the start of 2017, their single, ‘El Leopardo’, features deep, propulsive bass, pounding percussion, and echoing, chanted vocals, marking it out as one of the most exciting songs to come out of Bogotá this year.

YOPO released their first album – the excellent Ovolución – in 2016 on the independent Sello In-Correcto record label. Named after a traditional Sikuani indigenous visionary snuff made from the seedpods of the Yopo tree, YOPO’s music is a practically indefinable blend of experimental electronica, Andean music, trip-hop, and ambient, which its creator, Gregorio Hernández de Alba, has described as Latinotrónica.