The Most Beautiful Plazas and Squares in Cartagena 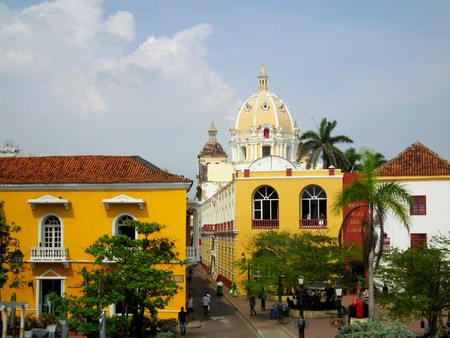 Cartagena is perhaps the most photogenic city in the Americas: with its colorful colonial buildings, beautiful churches, and stunning squares and plazas, the “Jewel of the Indies” is one of Colombia’s most popular tourist destinations with good reason. Cartagena’s squares and plazas in particular are wonderful places to spend time: here are the most beautiful of the lot.

Named after a Colombian saint known as the Patron Saint of Slaves, San Pedro Claver Square is a popular gathering point for locals in Cartagena, with many public benches bearing witness to this. The dominant architectural feature of this square is the huge church which also bears Claver’s name. A bronze statue of Claver ministering to slaves dominates the center of the Plaza, and there are several other beautiful sculptures paying tribute to the street activities which remain popular in this square, including two old men playing a game of chess. 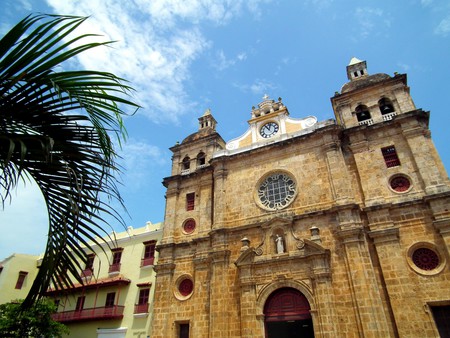 Almost every city and town in Colombia has a central square dedicated to the man known as “The Liberato,” and Cartagena is no different: the city’s Bolívar Square is a pleasant, shady plaza, dominated by an imposing statue of El Libertador astride a horse. As one of the few plazas in the city which is full of trees, it makes a lovely spot to escape from the intense Caribbean sun and watch the world go by. There are lots of benches and regular performances by groups of champeta dancers performing traditional African dances and music. The Zenu Gold Museum and Cartagena’s Cathedral are also alongside this lovely little square.

Located just a block from San Pedro Claver Square, the Plaza de La Aduana—or Custom’s Square—is one of the largest open spaces in the Old City of Cartagena. Bordered on one side by the imposing city walls—get up close to these and you can still see coral formations in the rocks—at the center of the square is a statue of Christopher Columbus alongside an indigenous woman (which some have suggested is in poor taste given Columbus’ impact on Latin America’s indigenous people). The principal building overlooking this lovely square is the old colonial customs house, where the founder of Cartagena, Don Pedro de Heredia, once lived. 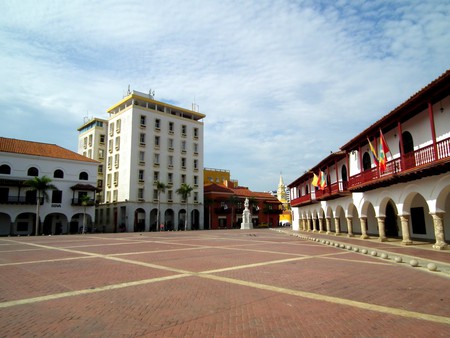 Named after Cartagena dignitary José Fernández Madrid—with a statue of him in the center—this square is a popular hangout for students and young travelers. It’s a lot more laid-back than some of the other plazas in the city, with plenty of bars and restaurants, and lots of nice outdoor seating, making it one of the most popular spots in the Old City to enjoy a cold beer or coffee in the sunshine. This is definitely the square to while away the hours enjoying the pleasant rhythms of the Caribbean.

Santo Domingo Square is another of the Walled City’s most iconic squares, but it is also one of the most touristic of the lot: with several pizza restaurants offering outdoor seating in the center of the square, be prepared to say “no thank you” to a lot of street vendors hawking everything from Colombia football shirts to miniature Botero statues. However, don’t let this put you off paying a visit: the iconic Botero statue La Gorda Gertrudis lies in the heart of the square, and the imposing church has quite a colorful story: legend has it that the tower of the church is slightly tilted because, a few days before construction was finished, the devil himself showed up and tried (unsuccessfully) to topple the tower. 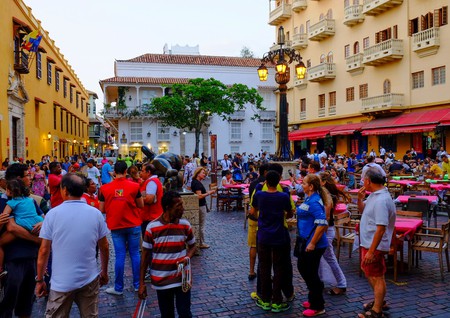 The first square that most people see when they enter the Walled City is Plaza de Los Coches (or Square of the Cars), which was named as such because the mayor allowed cars to park in front of the numerous sweet shops that line the edge of the square, also known as the Portal de los Dulces. The square is overlooked by the iconic Torre del Reloj, and in the center stands a statue of Pedro de Heredia, the founder of Cartagena. 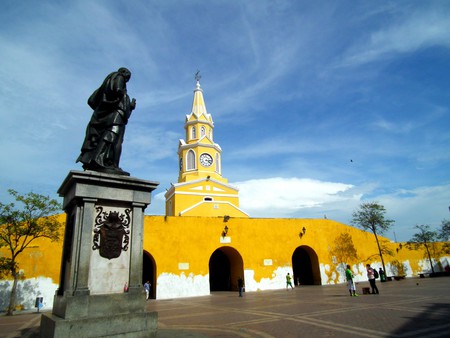 The nicest square outside the Walled City, Trinidad Square is located in the heart of the artistic neighborhood of Getsemani. It has a much more informal atmosphere than many of the other squares on this list, with a multitude of travelers, students, street performers, and families gathering there every night to have a few drinks, eat some street food, and just enjoy the pleasant vibes. There are plenty of bars and restaurants to enjoy at Plaza de La Trinidad, but most people just seem to grab some cheap beers from a tienda on the corner, grab a seat on the steps of the church, and enjoy the Caribbean vibes.