The Most Beautiful Buildings in Cartagena, Colombia 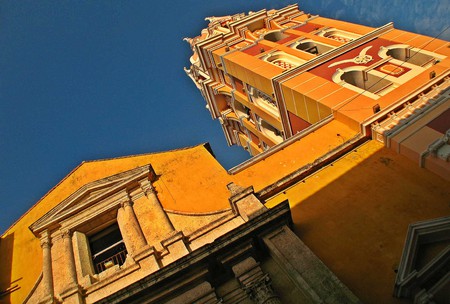 As an important Spanish colonial port city, Cartagena is home to an impressive array of historical architecture. From striking palaces once used by the Inquisition, through to imposing stone castles overlooking the sparkling Caribbean Sea, here are the most beautiful buildings in the ‘Jewel of the Indies’. 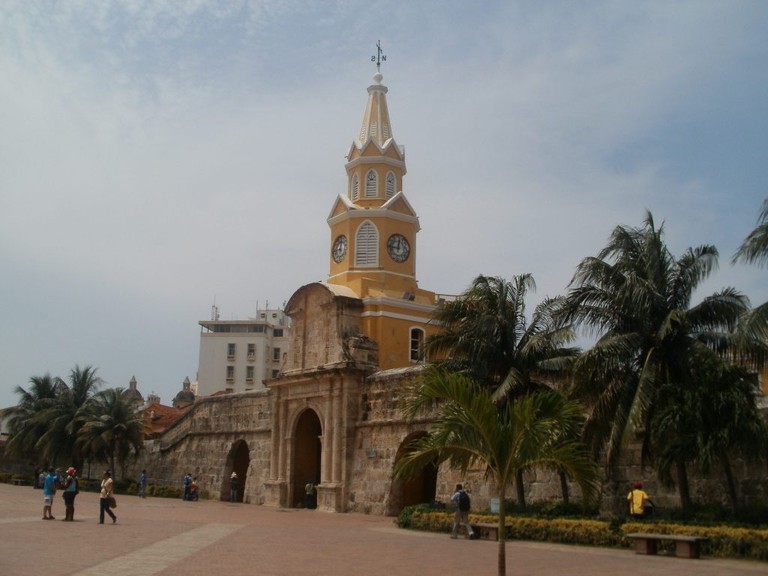 Construction began on the tower in 1601 – however, as is the case with many of Cartagena’s oldest buildings, it was partially destroyed in a raid (in this instance, by the Baron of Pointis in 1697) and later repaired and partially redesigned in 1704. Its final restoration was in 1888 by architect Luis Philip Jaspe Franco, who added the Gothic style to the clock tower which makes it such a striking building to this day.
Open In Google Maps
El Centro, Bolívar, 130001, Colombia
+573053222426
Give us feedback

Located in the historical center of Cartagena, this magnificent cathedral was first constructed in 1577 and, in spite of being severely damaged in an attack by Francis Drake, was completed in 1612. The iconic tower, seen in so many photographs of Cartagena, was designed by a French architect named Gastón Lelarge in the early twentieth century. The cathedral houses an impressive 18th-century gilded altar and a Carrara marble pulpit.
Open In Google Maps
Carrera 4, El Centro, Bolívar, 130001, Colombia
+5756645308
Visit Website
Give us feedback

Building
Facebook
Email
Twitter
Pinterest
Copy link
Share
Map View
This 17th-century religious complex is perched on the highest point in Cartagena – a 150 metre (492 feet)-high hill known as La Popa – and offers commanding views across much of the city, including the Caribbean Sea, the Walled City, and Tierrabomba Island. In spite of extensive damaged sustained during several attacks on Cartagena, the convent, chapel and cloister still stand today, albeit following extensive restorations over the years. Although the views alone are stunning, the convent is a beautiful building: the flower-filled patio of the cloister is a particular highlight.
Open In Google Maps
Calle 37, Bolívar, 130003, Colombia
+5756643700
Visit Website
Give us feedback

The 47 porticos and 23 domes of Las Bóvedas, built in the late 18th-century by Antonio de Arebalo, were the last important colonial structure built within the walls of the Old City. Meaning ‘the vaults’ in English, Las Bóvedas was originally constructed as a munitions storehouse and wound up being used as a dungeon in the Wars of Independence; its proximity to the Caribbean Sea meant that, supposedly, the unfortunate prisoners would be standing in sea water at high tide! A popular tourist attraction these days due to the artisan craft market that now occupies the former cells, Las Bóvedas is a beautiful example of Cartagena’s colourful, historical architecture. 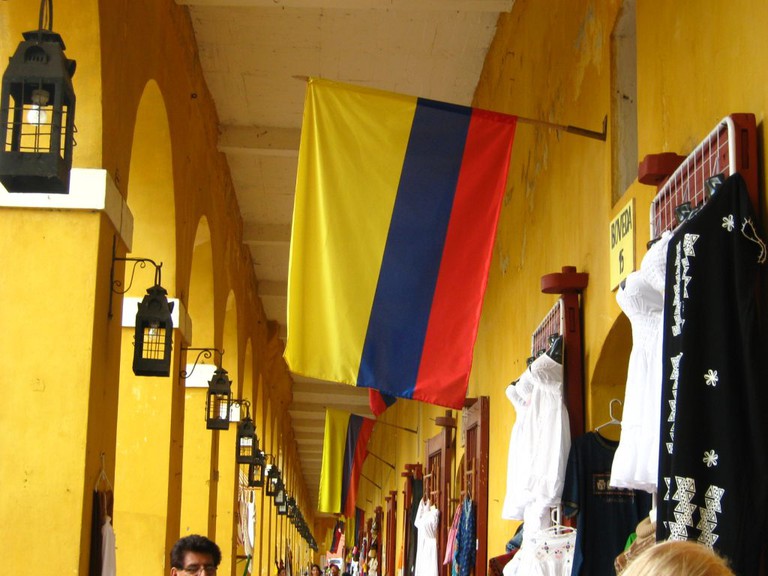 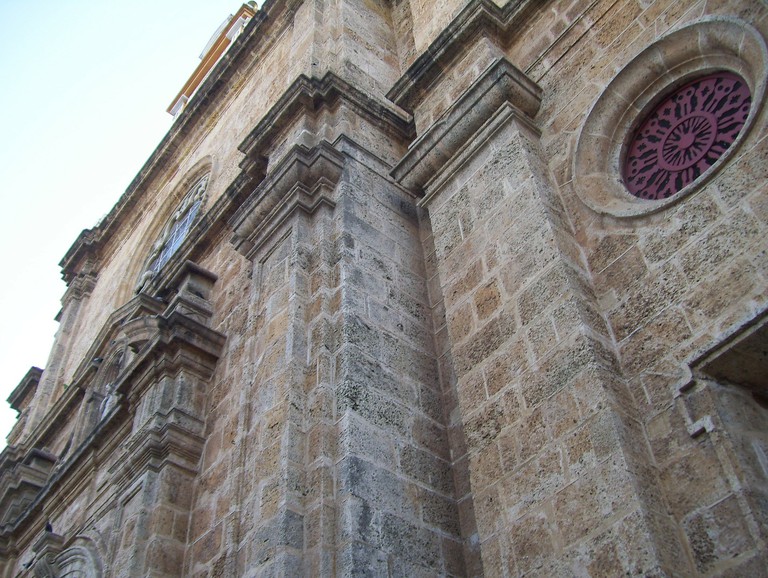 The imposing stone facade of San Pedro Claver church | © Julianza/Pixabay
Construction on this imposing church which houses the bones of its namesake, Saint Peter Claver, was begun in 1580 and completed in 1654. Claver, the patron saint of slaves and Colombia’s first saint, is interred beneath the altar of the church, which has undergone many architectural changes in its nearly 500-year history. Built in the ‘Jesuitic’ style of architecture, in 1921 the present dome – also a work of Gastón Lelarge – was constructed, and is another landmark of Cartagena architecture, appearing in perhaps as many tourist photos as Lelarge’s cathedral tower.
Open In Google Maps
##30-01 Carrera 4, El Centro, Cartagena, Bolívar, 130001, Colombia
+5756644991
Visit Website
Give us feedback

The Palace of the Inquisition

Building, Museum
Facebook
Email
Twitter
Pinterest
Copy link
Share
Map View
This imposing Spanish colonial and Baroque structure dates back to 1770 and was constructed on the decree of Philip III of Spain. Cartagena’s role as a port city and transit point between Spanish and Caribbean settlements meant that the city was the third in the Spanish Empire to have its own Inquisition tribunal, and it was in this magnificent building that the Inquisition of Cartagena carried out their gruesome tasks, including the execution of some 800 suspected heretics. It is currently a museum of the history of the city – it once housed an excellent museum of torture equipment, but those machines were removed prior to the visit of Pope Francis in 2015 – but the grandiose building alone is a testament to the sometimes dark history of Cartagena.
Open In Google Maps
Palacio de la Inquisición El Centro, Bolívar, 130001, Colombia
Give us feedback

The Castillo San Felipe de Barajas is another one of Cartagena’s most visited landmarks: located on San Lázaro hill, strategically positioned overlooking both land and sea approaches to the city, the castle was constructed gradually over a period of 120 years beginning in the 16th century. Named after Philip IV of Spain, the castle is particularly architecturally striking due to its complex series of tunnels and its impressive entrance. It is now listed as a UNESCO World Heritage Site and is open for visitors to explore its tunnels and parapets and enjoy an impressive view of the city below. 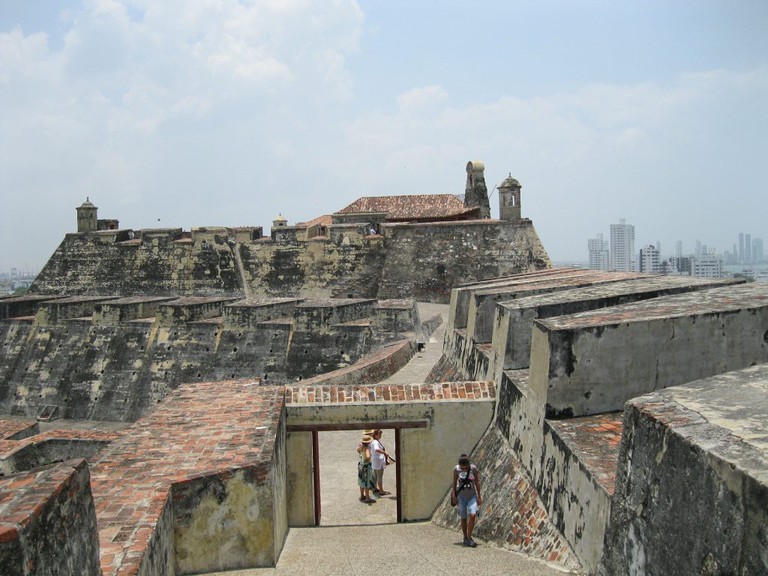 Building, Church
Facebook
Email
Twitter
Pinterest
Copy link
Share
Map View
Originally built as a Dominican convent in the 16th century, the Santo Domingo convent is one of Cartagena’s most important tourist attractions, overlooking the Santo Domingo square, with its humming nightlife and popular bars and restaurants. The building probably appears in most photos as a backdrop to the iconic Gorda Gertrudisstatue by Fernando Botero, but is a striking structure in its own right, with a lovely yellow façade, rounded dome roof, and quadrangular bell tower. The building was recently restored and has regained much of its former grandeur, having descended into disrepair for much of the previous century.
Open In Google Maps
El Centro, Bolivar, 130001, Colombia
+576645048
Visit Website
Give us feedback
Give us feedback