The Most Beautiful Beaches on Colombia's Fantasy Island, Providencia 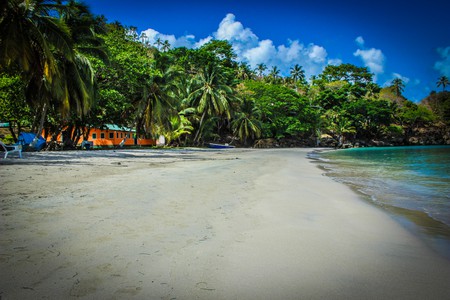 The small Colombian Caribbean island of Providencia is home to some of the most beautiful, and unspoilt, beaches in the country. Surrounded by a protected coral reef, the island has remained mercifully free of large-scale tourism, and there are still amazing heavenly Caribbean beaches to enjoy there with barely another visitor in sight. So here are the most beautiful beaches on the Colombian fantasy island of Providencia.

Perhaps the most beautiful beach on an island of beautiful beaches, Manzanillo Beach – also known locally as Manchineel Bay – is a 300m long beach on the south-east coast of the island, with turquoise waters, palm trees, and only one building in sight: Roland’s Roots Reggae Bar. This fantastic chilled-out little beach-bar serves cocktails and food, with live music and beach parties at night. It’s the perfect place to sunbathe all day and party all night. 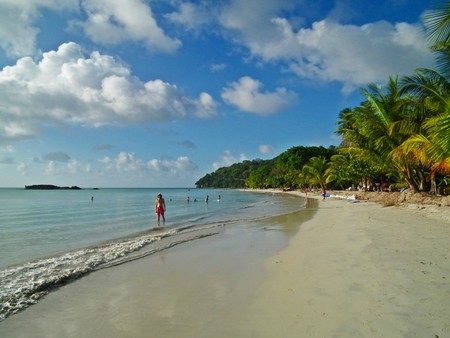 This beautiful bay is home to Providencia’s longest beach – the popular southern section is home to some of the island’s best seafood restaurants (seriously, the seafood platters are mind-blowingly delicious and huge!), while the northern area of the beach is much calmer and quieter, with little other than perfect blue waters, palm trees, and white sands. On Saturday South West Bay is also the site of Providencia’s coolest local tradition, as islanders come out to race their horses along the beach in the shallows of the Caribbean waters.

This wide bay is located on the east coast of Providencia and is also the location of the stunning Crab Caye (see below). Maracaibo Bay is arguably home to the most spectacular landscapes in the whole of Providencia. The bay itself is home to just a few small beaches, but it’s the location of the McBean Lagoon and McBean National Park, the site of probably the most beautiful, and crystal-clear waters on the island. Kayaking and snorkelling are particularly popular here, and turtles and rays are regularly spotted in the warm, clear waters.

The tiny offshore island of Cayo Cangrejo can be seen in the distance from the coastline of Maracaibo Bay – again, it’s not exactly a beach, but it is perhaps the most delightful place to spend a day on the whole island. With a little wooden jetty where you can sunbathe, remarkably blue and clear waters for snorkelling and diving, and just about the most spectacular view in the Colombian Caribbean, Crab Caye is often the highlight of Providencia for many visitors. 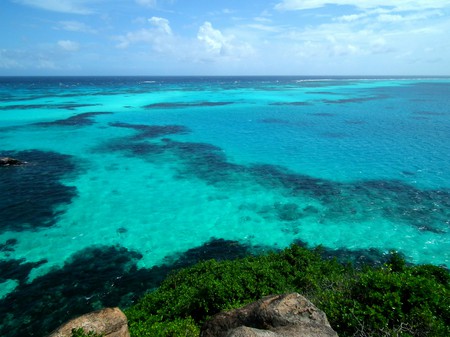 The site of the majority of the restaurants and hotels on Providencia, Freshwater Bay is also the location of yet another beautiful beach. It might not be able to compete with the likes of Playa Manzanillo or South West Bay, but this pretty little 150m long beach certainly has its charms, and the proximity of accommodation and food options is a real bonus compared to some other beaches. And, as you can see, there really aren’t any unattractive beaches on Providencia!

The small island of Santa Catalina lies just alongside Providencia’s mainland, and is accessible via a long wooden bridge known as ‘Lover’s Bridge.’ The whole island is surrounded by delightful little beaches such as Fort Bay and Red Beach, which can only be accessed by kayak and is one of the area’s truly off-the-beaten-track beaches. There’s also great snorkelling at Morgan’s Head, and really adventurous travellers can swim on from there to Morgan’s Cave, where the legendary pirate supposedly stashed his treasure.

One of Providencia’s less visited and well-known beaches is also one of its loveliest: a much more remote little beach on the west coast, Almond Bay is home to a small restaurant and snack bar, and not much else. However, the beach is gorgeous: the waters are calm and perfect for snorkelling and the isolation gives it a truly Robinson Crusoe vibe. Almond Bay is the perfect beach to visit if you want to enjoy a paradise beach virtually all to yourself.