A Look at the Best Street Art in Bogotá 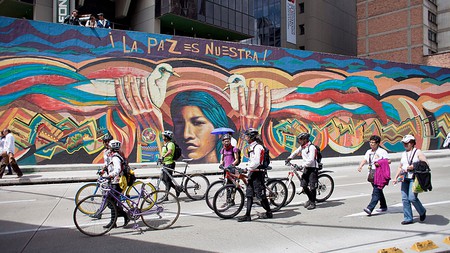 Colombia is shedding its negative reputation with a cultural and artistic renaissance to match any of its South American neighbors. Nowhere is this more evident than in the street art of Bogotá, which reveals the untrammeled creativity of the capital’s graffiti artists.

Thanks to its checkered past, Colombia commonly conjures images of drug cartels, paramilitaries and violence. For this reason, the country is too often overlooked by travelers. But that’s changing. Events such as the Bogotá Book Fair, exhibition spaces such as the Museo Del Oro, and artistic leaders such as writer Gabriel García Márquez have put it on the international culture map.

But the accessibility of the country’s cultural landscape doesn’t end there. One of the most vivid experiences you will have here is engaging with the street art, which you can do on Culture Trip’s specially curated eight-day Colombian Andes tour, led by our local insider. The declassification of graffiti from crime to violation has led to Bogotá becoming a hotbed of global talent with home-grown and world-renowned artists congregating here to practice their art. The ability to expand and experiment with their styles with little fear of legal reproach has proved attractive, and as a result the city pulsates with international and local talent. 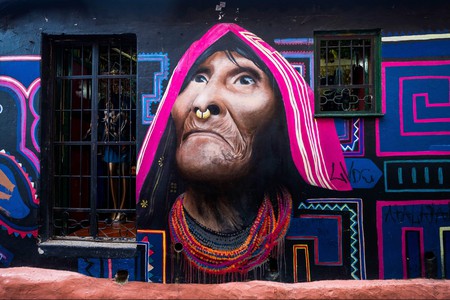 Areas of Bogota, such as La Candelaria, are now home to some of the best street art in the world | © Hemis / Alamy Stock Photo

Colombia has embraced street art as the artistic expression of its people. Artists are often commissioned to create facades in a bid by businesses to avoid mindless tagging, and advertising campaigns utilize the medium as a channel to reach their market. For the grafiteros themselves, it’s a chance to create powerful social commentary about the nation’s politics, to champion their heroes or simply to brighten the days of the people who suffered through Colombia’s somewhat murky past.

While you can always tour the city’s gallery-walled streets independently, a unique introduction comes from a tour offered by street artist CRISP who moved to Colombia in 2009. Booked via Bogotá Graffiti, the 2.5hr tour starts at the Parque de los Periodistas under the watchful gaze of one of the city’s numerous statues of national hero Simón Bolívar. As you snake through the winding paths of La Candelaria, Bogotá’s old town, CRISP explains the images and their subtext, which you would likely miss without extensive knowledge of the nation’s history.

CRISP was born and raised in rural Australia to artist parents. And after creating art through sculpture, carvings and photography across the globe over 10 years, it was a trip to Bogotá that led him into street art and the use of less traditional mediums. Since then, he has exhibited in London, New York, Miami, the Dominican Republic, Mexico and Alaska. Modestly, his tour focuses more on other artists who have inspired and motivated his work. Here are some of the artists you might see on a graffiti tour of Bogotá . 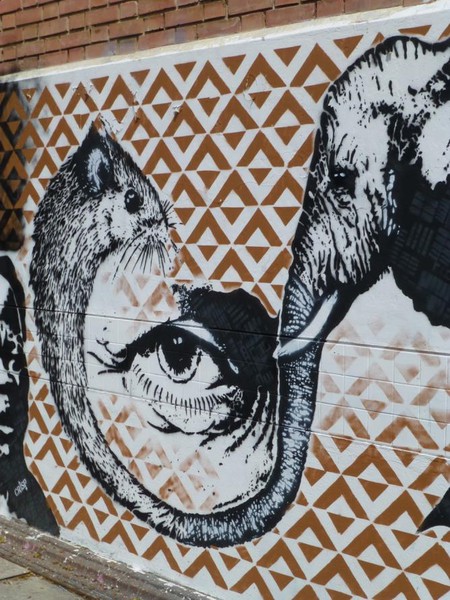 Colombian-born artist Rodez is father to street artists Nomada and Malegria with whom he works the street walls. Both his sons studied at the National University of Colombia, a center for intelligence and leftist thought in the country. Together they often travel to Buenos Aires in nearby Argentina to paint and teach. His surreal creations are often creatures with multiple eyes – his animales fantasticos. 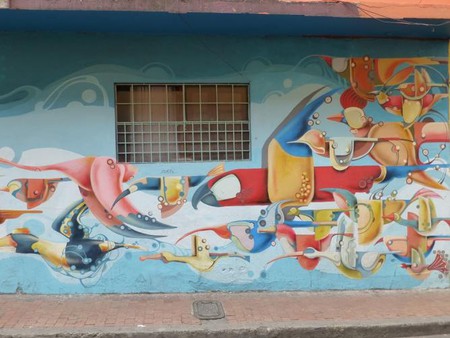 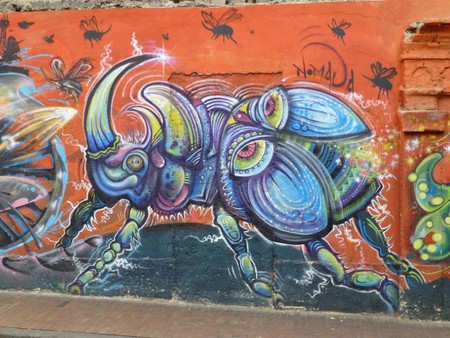 Fine art graduate DjLu is another product of the National University and has become known for his politically charged pictograms stenciled across the city alongside his signature Juega Siempre (Always Play). His work is impactful and he has fought against brands that have tried to monetize his work, rather hoping to open the eyes of people to Bogotá and to life’s opportunities. 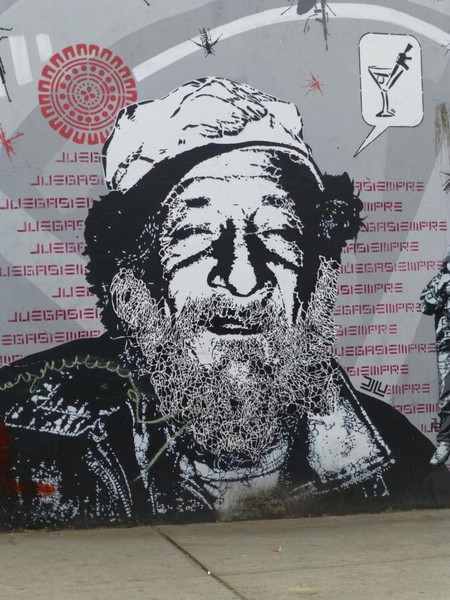 APC (Animal Poder Crew) is one of the most prolific street art collectives, reclaiming the street aesthetic with multiple murals across the city. Started by Stinkfish, it has since grown into a truly international collective encapsulating graffiti writers and street artists from Latin America and Europe. APC includes many talents including Gris-one, Ark, Pez, DEXS, Chirrete Golden, FCO, Saks, Sabor and Temor. Their styles are varied and dynamic but predominantly feature freestyle techniques and characters with strong graffiti influences. 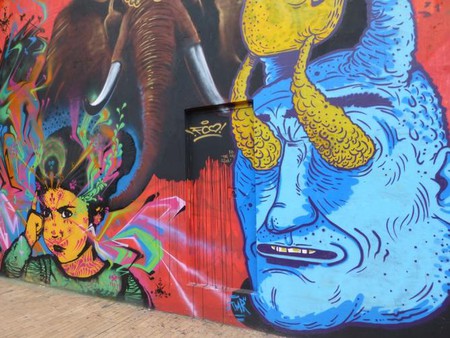 Stinkfish himself, with a dual heritage from Mexico City and Bogotá, has exhibited in London, New York, Los Angeles and Paris. He is best known for creating large-scale face stencils with dramatic freehand spray-can work embellishing them. But he is a true all-rounder, also working on stickers, paste-ups, tags, characters and stencils.

Hailing from Barcelona, street artist Pez also exhibits in Bogotá, flying solo and as part of APC. His concrete canvases, peppered with the smiling fish motif, have made him globally famous and he has based himself in the city where he lives with his Colombian wife and child. 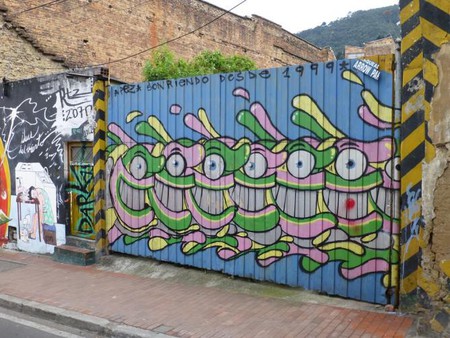 Toxicómano is a Bogotá-based collective that mixes punk and propaganda in their statement stencils that poke fun at advertising techniques and mass media. 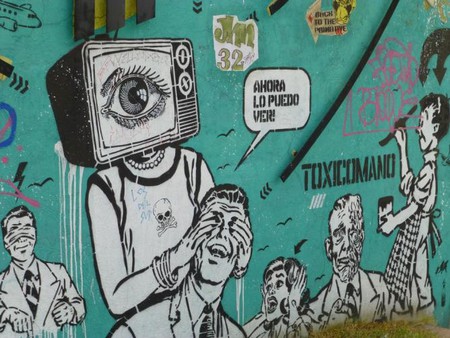 Corrosivo Carsal paints independently and in the collective Schablone in his hometown of Bogotá, focusing on stencils and paste ups. 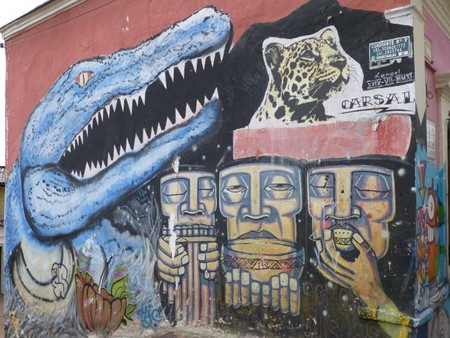 Others to look out for

Other prevalent grafiteros and collectives to watch out for as you tread the city’s paths include Miko, Zudoco, Bastardilla, Guache, Zancudo and Ledania. The length of these exhibits is impossible to calculate, a mural or stencil can last five days or five years. What can be relied on is that this effervescent city will always be teeming with home-grown and international talent who constantly challenge perceptions through world-class graffiti.