The Most Epic Hikes in Colombia 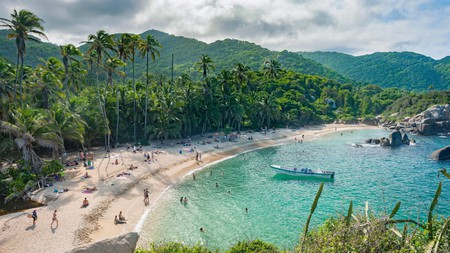 With three Andean ranges, the coastal mountains of the Sierra Nevada de Santa Marta, and the Amazon rainforest, Colombia has plenty of fantastic hiking opportunities. From challenging multi-day treks to shorter and more accessible trails, here are the most epic hikes in the country.

The Cocora Valley hike is arguably the most popular hiking experience for travelers in Colombia. Depart from the popular little coffee town of Salento to embark on a long trek through farmland, cloud forest and evergreen woodland, arriving at the eerie Cocora Valley, home to hundreds of the tallest palm trees in the world, some of which reach 60m (200ft) high. It’s not an expert-level trail, but you’ll need to be moderately fit and bring plenty of water. You can enjoy a spectacular hike through the Cocora Valley as part of Culture Trip’s epic eight-day Colombian Andes trip, led by our local insider. 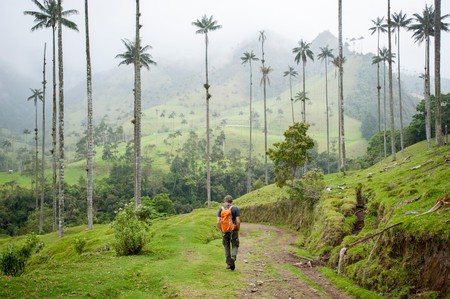 Puracé is a beautiful, high-altitude national park in southern Colombia, just a couple of hours from the lovely city of Popayán. It is possible to climb the Puracé volcano, but this can be tricky without professional equipment, a local guide and the right weather (which can be rare). Luckily, there is a beautiful trail through the lower sections of the park that’s around 20km (12mi) long and passes by natural hot springs, waterfalls and Andean lakes. It’s also one of the best places in the country to see Andean condors. 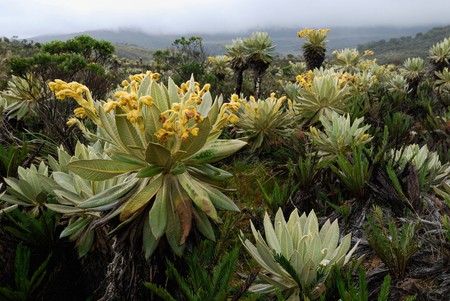 The ultimate Colombian trekking experience. The Lost City, or Ciudad Perdida, trek is the Colombian version of Peru’s Inca Trail, and attracts far fewer tourists than Machu Picchu. It’s a test of endurance: a four- or five-day hike over 47km (29mi) through the coastal jungles of the Sierra Nevada de Santa Marta mountains, including some pretty hairy river crossings. At the end, however, you get to explore one of the greatest archaeological treasures in South America. 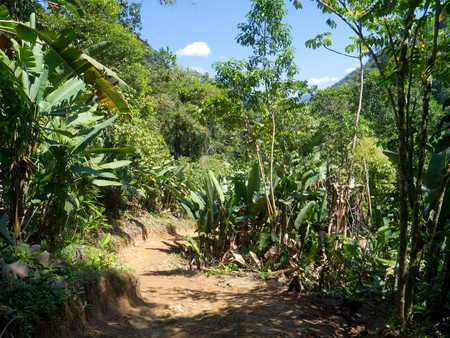 A beautiful waterfall hike in the jungles of the Putumayo department, the Fin del Mundo hike is another little-known gem. It’s not a long walk, but the intense jungle heat makes it tougher than you would expect, and you should pay attention to the weather as flash flooding is possible. The reward of crystal-clear pools and thunderous waterfalls surrounded by rainforest, birds and colorful butterflies should be more than enough compensation. The hike culminates in the 80m (262ft) high Fin del Mundo (End of the World) waterfall. 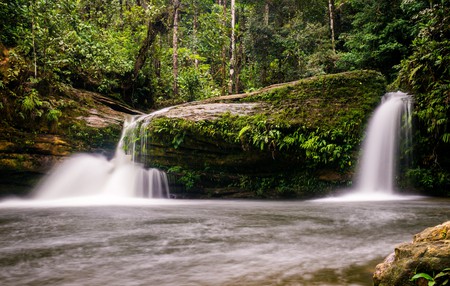 The hike to Fin del Mundo waterfall is not long, but the intense heat makes it tough | © Julian Peters / Alamy

Hiking around Tayrona Park is always enjoyable: if you rise early you can trek the forest and beach trails virtually alone, with nothing but monkeys and birds for company. But for a solid bit of exercise, you can’t beat the hike that enters the park from Calabazo. This hike passes the indigenous village of Pueblito (although you can’t enter) before descending, across giant boulders, to the picture-perfect beach of Cabo San Juan. It can take at least four hours, but it’s certainly a more exciting way of entering the park than the main gate. Interested in visiting? You can do so with Culture Trip on our specially curated small-group Colombian Caribbean adventure, which includes a guided hike through the Tayrona National Park. 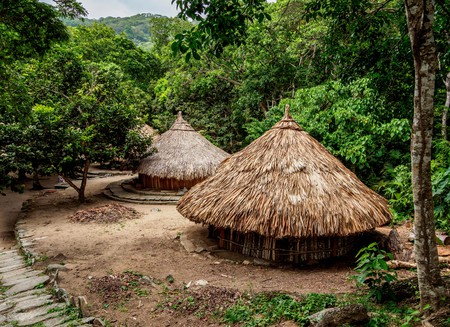 El Cocuy is one of the most beautiful off-the-beaten-track Andean destinations in Colombia – it’s a huge park with glacial lakes, snow-capped peaks and rocky valleys. The whole park was closed for several years, but is now partially open, with almost 50km (31mi) of hiking on three separate trails. Reaching the snow line is no longer permitted, but hiking in El Cocuy is sure to be a stunning experience. 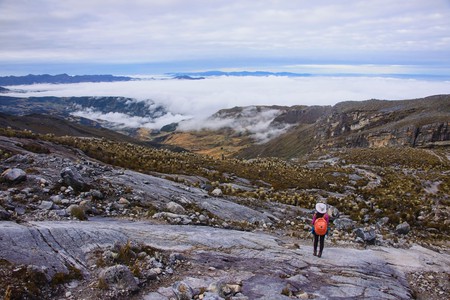 Summiting the 5,276m (17,310ft) tall Nevado del Tolima requires a high level of fitness and a solid dash of determination – it’s easily the hardest trek on this list. This is no mere stroll: it’s a three-day trek at high altitude, culminating in a hike across a glacier with crampons and ice axes. It’s not for the faint-hearted, but is amazingly rewarding for anyone with an ambition to climb a volcano. 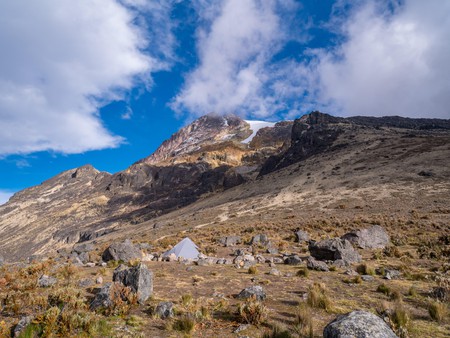 The Mavecure Hills are three giant rocky hills in the heart of the eastern jungles of the Guainía department, on the border with Venezuela. Getting there isn’t easy – you’ll need to fly from Bogotà, then take a canoe a couple of hours down the Inírida river – but the hike up the smallest of the three hills, culminating in a panorama of hundreds of miles of rivers and jungles, is an experience you’ll never forget. 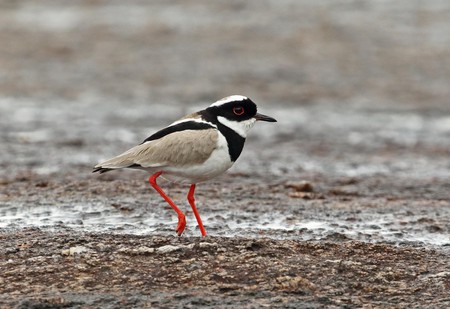 This is probably the shortest hike on this list, at only around two hours of walking time, but it’s undeniably scenic. The old Camino Real (Royal Road) passes through the Suárez Canyon from the lovely colonial village of Barichara to the smaller, but no less pretty, village of Guane. It can be devilishly hot in the middle of the day, so try to start this hike nice and early, and don’t forget that water bottle. 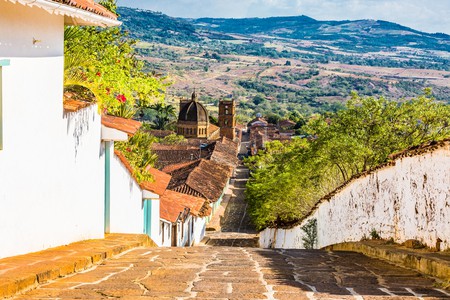 This glacial peak in Los Nevados National Park is one of the last remaining snow-capped mountains in the central range of the Colombian Andes. Hardy hikers can enjoy the experience of crunching snow underfoot on a hike up to the (unfortunately receding) glacier of Santa Isabel. It’s a three-hour hike uphill at altitude. And it gets punishingly cold, so dress warmly. 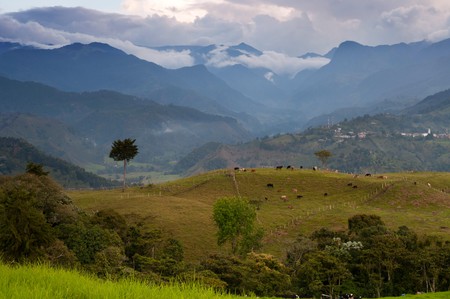 La Chorrera is the highest multi-drop waterfall in Colombia, at 590m (1,936ft), and is reached via a lovely 6km (4mi) hike through farmland and cloud forest. The best part? It’s less than two hours from Bogotà, so you can enjoy a good countryside hike before returning to a comfy hostel bed in the capital on the same day. 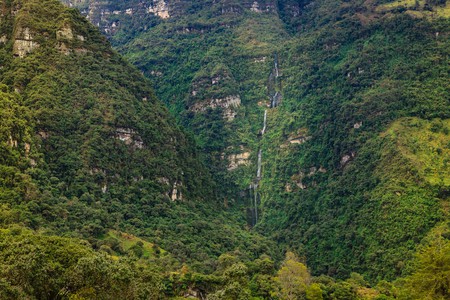