Inside the Street-Art Scene of Cartagena's Getsemani Neighborhood 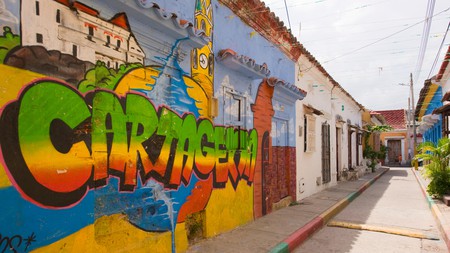 The only thing cooler than Cartagena’s historic backpacker district becoming a world-class gallery of public street art is the story of resistance behind it.

Colombia is already famous for its incredible graffiti scene, particularly in hip Bogota. But the mile-high capital is not the only Colombian city with incredible street art. The Getsemani neighborhood in Cartagena is lined with colorful street murals created by both local and international artists – and they pack a powerful social punch.

Back in the 2000s, Getsemani was considered a dangerous area, but its historic streets have transformed over time into the city’s official backpacker quarter. Hip hostels and artsy cafés have popped up to serve those who are not traveling on the luxury budget that the Old City demands. Getsemani also now has its own raging nightlife scene, much of it fuelled by its homegrown but African-rooted Champeta music, and houses some of the city’s top restaurants. 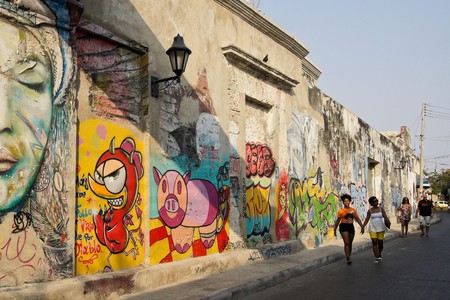 The graffiti murals have helped spark and drive this transformation, giving Getsemani a distinctly bohemian atmosphere that sets it apart from the Old City. The first murals appeared on Calle Sierpe, a semi-industrial stretch of drab concrete wall that was being used as an impromptu public restroom and smelled like hell. Local artists saw the opportunity to reclaim the streets with their spray cans and imagination and went to work.

“It was a self-generated movement here by us as a question of self-identity in this city,” Cartagena-born street artist Bluny tells me as he works on a massive piece on Avenida Pedregal, just across from the solid rock walls that once guarded the city against pirates. A part of the graffiti scene here for over 15 years, Bluny is a founding member of the CapTagEna Collective, a 20+ strong group of local Cartagena artists.

“The locals were with us and helped us, and it changed the tourism dynamic in Getsemani,” says Bluny. “This art serves to inform the tourist who may not know the history of this neighborhood. The colors and designs express the joy and creativity of this barrio as well as its history.” 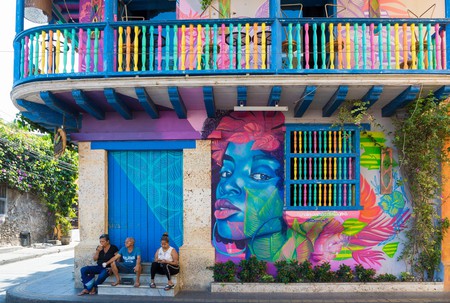 The fast changes that Getsemani is experiencing, especially the transformation of multi-generational family homes into tourist-oriented businesses, has its positive and negative aspects. As tourism booms, many long-time residents are moving out of the area, and much of what gave it so much appeal as a barrio popular (popular neighborhood) is quickly disappearing. Local eateries are closing down one day only to seemingly reopen in the morning as gourmet restaurants, and family-run hostels give way to boutique hotels.

Like many tourism hotspots all over the world, Getsemani is struggling with the blessing and the curse of gentrification. And the street art of the neighborhood has become a forum for the conversation.

“The historic architecture is part of the heritage of Cartagena and we agree, but the people of Cartagena, and especially of this ancient neighborhood, are a living heritage that we are now honoring with our street art,” says Ios Fernandez, the director of Champetu, a local arts organization that produces the annual Aerosol Street Art Festival in Getsemani in February.

The festival brings in international artists to do pieces on the walls of the neighborhood. “The festival has artists invited from all over Latin America including Peru, the Dominican Republic, Brazil, Mexico and all over Colombia,” says Ios, explaining that the festival is rooted in a global street culture that recognizes public space as a powerful stage for expressing perspectives that are not always included in more mainstream forms of communication.

“Every work has a story, and it’s a story that the artist wants to share with the public, which is really the magic of this medium – that it’s for everyone,” says Showy, a well-known artist from the Colombia-Venezuala border town of Cucuta. 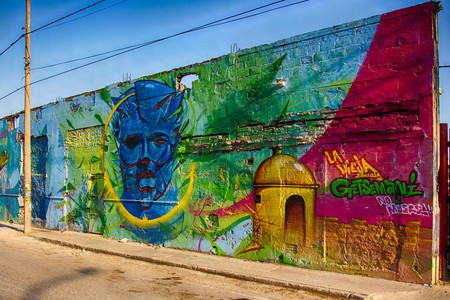 Showy is here for the Aerosol festival and is doing a piece on the wall of Callejon Angosta, a narrow pedestrian-only passageway that is still home to many traditional Getsemani families. Its rows of colorful umbrellas acting as a canopy from the sun and local domino games in front of colonial houses make it a favorite spot in Cartagena for visitors snapping selfies.

“This work is the face of a young cartagenera, with a bird that is very Colombian, called the perico carisuicio – the brown-throated parakeet,” Showy continues. “The work is full of energy, full of colors and good vibrations that come from the Champeta, which is a music of [Colombians] with African roots that helps people feel good and enjoy life, no matter what the circumstances.”

Indeed, Getsemani is more than just another residential neighborhood being changed by tourism. It occupies a unique historical and cultural space in Colombia’s identity. It was here in Trinidad Plaza that the first independence movement in the country was started when blacksmith Pedro Romero, armed a rebellion against the Spanish crown that resulted in the freedom of the entire city of Cartagena some 11 years before the rest of the country became independent. 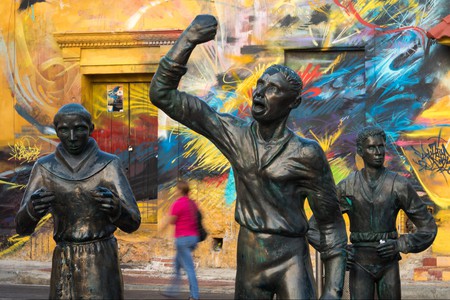 That first battle was fought by the residents of Getsemani, whose statues still stand in Plaza Trinidad, the beating heart of the neighborhood to this day a great place for visitors to mix and mingle with locals over a cold beer in the humid evenings.

This spirit of rebellion is behind the bohemian vibe that makes Getsemani so undeniably cool, to the point where many tourists feel that it even outshines the Old City in terms of soul and atmosphere, if not physical beauty.

And the graffiti only adds to this authentic appeal. “Getsemani has a history that is super interesting, and it continues with the resistance to the displacement of its residents,” Showy tells me. “This art raises questions in the minds of tourists who come to Getsemani. In fact, it can be the bridge that connects them to the local residents who want to share their story.”