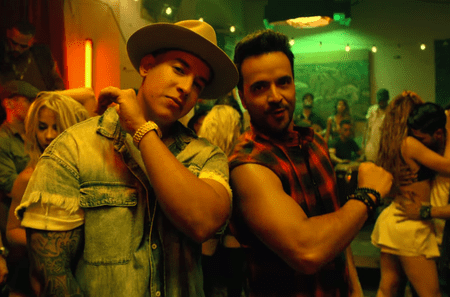 Luis Fonsi’s ‘Despacito’ may be the most-streamed song of all time but ‘Mi Gente’ could be about to give it a run for its money.

The song by Colombian singer J Balvin has just overtaken the summer anthem at the top of Spotify’s Global Top 50 and climbed into the top 20 in the UK singles chart.

‘Mi Gente’ is a remix of French singer Willy William’s track ‘Voodoo Song’ that adds in reggaeton beats along with a global message of acceptance.

Balvin, who is already a big star in South America, told the BBC: ‘We took a risk to make new music, new colours, new ways. It’s crazy what we created.’

The singer has revitalised reggaeton, which hails from Puerto Rico, by blending it with African, electronic and Caribbean influences.

But he wants his music to have global appeal: ’I’m Latino but I don’t do music for Latinos. My music is for everybody in the world.

‘Music has to be a tool to unite people, to get people together. It doesn’t matter the race, the language, the culture.’

The success of ‘Mi Gente’ comes hot on the heels of ‘Despacito’s’ world domination. Apart from these two tracks, there are five other Spanish-language songs in the Spotify top 50.

‘People are just more open to listening to good vibes, even though they don’t understand the words.

‘That’s beautiful. That’s amazing. It’s like we’re showing the world this is not luck… This is really down to good faith and hard work.’

The star, who once worked illegally in the US as a roofer, racked up one billion views on YouTube with the ballad ‘Ay Vamos’ – the first ‘urban’ Latin song to achieve the feat.

But Balvin isn’t satisfied yet.

He said: ‘I want to go bigger. Everything started with a dream. I dreamt about having one of the biggest Latin albums, I dreamt I’d be a global artist.

‘And dreams do come true.’