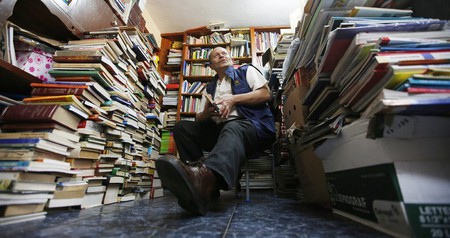 Jose Alberto Gutierrez sits among piles of books at his home in Bogota, Colombia | © Fernando Vergara/AP/REX/Shutterstock

Jose Alberto Gutierrez is changing Bogotá’s la Nueva Gloria neighbourhood and the country’s underprivileged children, one book at a time. Jose is a 55-year-old dustbin man, who began collecting books thrown away by the citizens of Bogotá. Over the last 20 years he has collected enough books to fill the downstairs of his apartment, which he turned into a library in 2000.

Jose Alberto Gutierrez has loved reading since his youth, when his mother sent him to bed every night with a book. Jose’s dream began when he found a discarded copy of Tolstoy’s novel Anna Karenina on his morning rounds, thrown out by a home in Bogotá’s Bolivar neighbourhood, he picked up the book and took it home to his house. 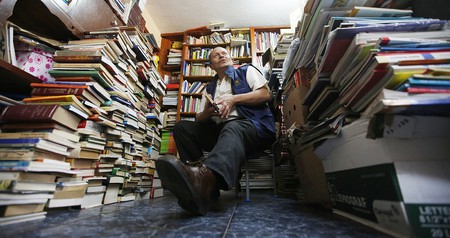 Over the last 20 years Jose has collected over 20,000 books while on his rounds, from all over Bogotá and in 2000 he opened a library in his house named La Fuerza de las Palabras (the strength of words). Since it opened, the library has taken over the entire bottom floor of his two-storey house, from floor to ceiling, every space is crammed with books.

When Jose began collecting books his fellow dustbin collectors thought he was crazy, Jose stated: “Lots of people mocked me, they would laugh when they found out about my project. But now 20 years later, they are amazed”. Jose has now been given the nickname ‘Lord of the books’, by his colleagues, the media and his fans.

Gutierrez grew up and lives in a low income neighbourhood in the south of Bogotá. In this area, people are not well educated and don’t have access to public libraries. Jose created his library when his neighbours began to visit his house and asked to borrow books to help their children prepare to start school.

Jose himself left school young due to poverty, but at the age of 50 he went back to high school and completed his education within three years. The aim of his library is to help children from low income families to read and use education as a way to break the neighbourhood’s poverty cycle.

“The whole value of what we do lies in helping kids start reading,” said Jose. “This neighbourhood used to be miserable, I grew up here and I can tell you it got me a Phd in marginalisation and poverty. Kids here don’t have a place to study, instead they have to work early.” Jose knows exactly what it’s like to be a child in the neighbourhood, having experienced it first hand. 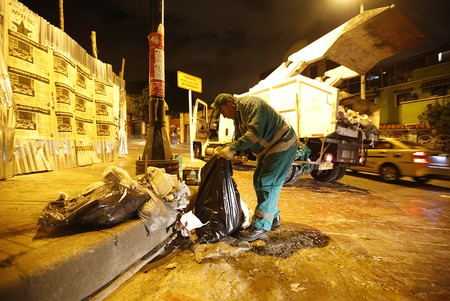 He has strived to give children access to his books, taking them to poorer areas or remote parts of the country. The project has brought him media attention from all over the world, along with donations and sponsorship. Jose has received a donated ambulance, which he converted into a mobile library to drive around the neighbourhoods, as well as book donations.

So far he has donated over 235 books to public schools, industries and libraries over the city, but is still receiving twice as many books as he is donating. Jose was also given a piece of land by a sponsor in which his dream is to open a library (he’s currently fundraising for this project). He said his dream is to “exchange my garbage truck for a truck full of books and travel the country”.

Gutierrez’s family is well and truly behind his project, his oldest daughter is 29-year-old Maria Angelica who is currently running the library, his 25-year-old son is in charge of admin and budget and his youngest daughter Merylin Marcela drives around the city delivering and picking up books. Jose’s wife, Luz Mery, is also his business partner, and looks after the phones, organises events, collections and everything in between. Jose calls heran ‘example to society’, and between them they have stretched their dustbin man and seamstress wages far and wide to put on events and readings for children in the community. 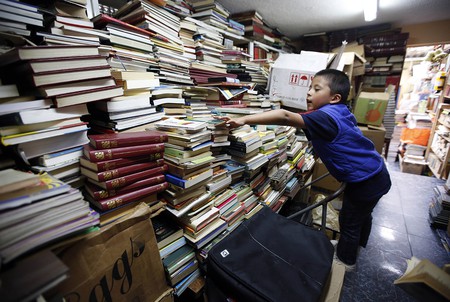 In addition to books, Jose has collected antique newspaper and magazine clippings of significant events in Colombia, which he hopes to display in an area of the yet to be constructed library. He also has an extensive collection of vinyl records and encyclopaedias along with antique books he has kept since his childhood.

After finishing high school, Jose’s new dream is to write a book of his experiences throughout the years, which he hopes to structure around 60 books which have influenced him over the years and driven his own metamorphosis. He hopes the books will display his drive, history, faith and inspiration, in a unique way. To inspire others to follow his path and help the people that need it the most.

Worldwide media have reported on Jose’s story and he is somewhat of a celebrity in the community. He has been invited to events all over Colombia and the world, most famously the Guadalajara International book fair in Mexico, which is the largest of it’s kind in Latin America. Some of Colombia’s top journalists, writers and poets have visited Jose’s library along with individuals from Denmark, France, South Korea and Norway, who have visited and use the library as a model for their own projects. 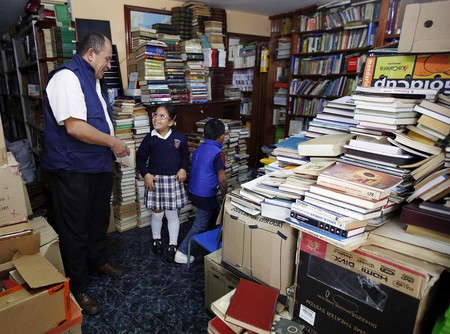 Jose is also playing his part to help with Colombia’s peace process, by sending books to help the FARC prepare for jobs when they return to civilian life. He said: “Books transformed me, so I think books are a symbol of hope for those places. They are a symbol of peace.”

Gutierrez’s story is an amazingly kind, heartfelt one, inspiring and helping Colombia’s under-privileged families to achieve success and create better lives for themselves.