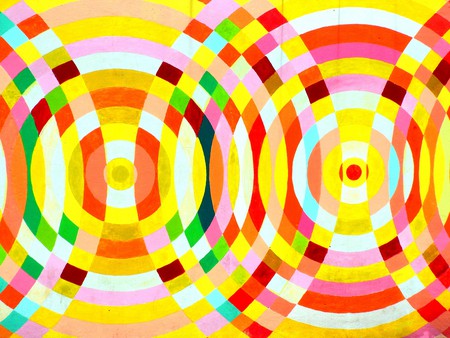 Street art in Colombia, particularly in the capital, Bogotá, is fast developing a global reputation for its quality and diversity – the fact it’s legal in many parts of the country gives artists freedom to unleash their creativity. Though there are hundreds of artists bringing color to the city walls, some stand out. Here are some of the coolest street artists in the country.

With Culture Trip, you can enjoy a guided walking tour of La Candelaria, the Bogotá graffiti district, as part of our specially curated eight-day Colombian Andes tour – led by our Local Insider.

Guache is one of the most successful street artists in Colombia, and his unique style is instantly recognizable on a walk through Bogotá. Taking his name from a derogatory colloquialism, previously used to describe indigenous people (the idea being to reclaim the term and give it a new, positive meaning), Guache creates giant murals to shine a light on indigenous cultures and imagery, and his use of bright colors makes for some beautiful pieces of art. 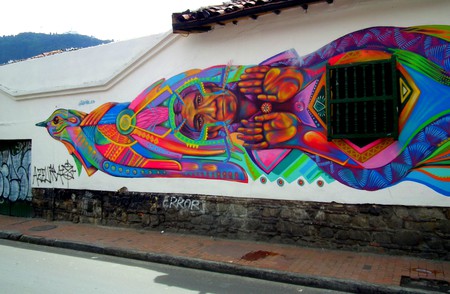 This Guache mural is found in Bogotá | © Chris Bell

One of the most overtly political street artists in the country, DJ LU (whose name comes from his DJing days, though he’s also a trained architect) is a prolific graffiti artist, and his tags, stencils and murals are found throughout the Colombian capital. His stencils are especially well known, from his pineapple grenade to images of homeless people from his native Bogotá. However, he is careful never to offer an outright political stance, something that his tag line Juegasiempre (always playing) attests to. 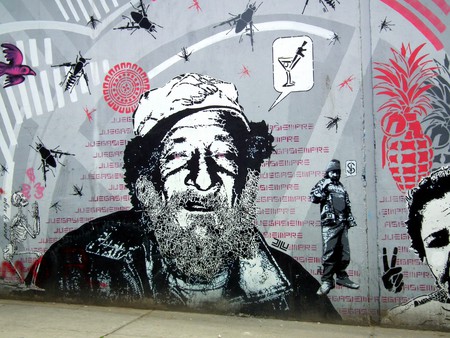 Lik Mi is an independent designer from Bogotá who has become well known for her brightly colored paste-ups (paper designs pasted to walls in such a way that they are hard to rip off), as well as her large murals, which often depict sexual situations in a playful and relaxed fashion. She also designs bespoke jewelry.

Rodez’s murals are unmissable due to his trademark style of depicting multiple eyes within his paintings. He is a contemporary artist who also paints with his children, who go by the street-art names of Nomada and Malegria. Rodez likes to include details from the experiences he had while creating his pieces, and so he will often write, within a mural, the names of people who came to talk to him while he was creating it. 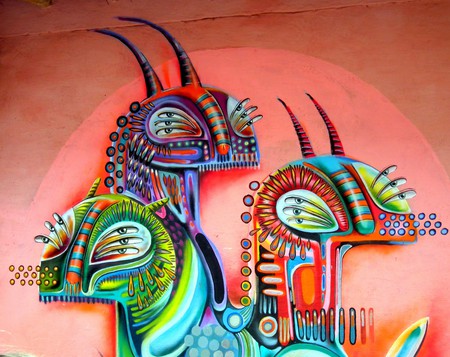 Rodez is known for his many-eyed creations | © Chris Bell

Stinkfish was born in Bogotá and is now recognized as one of the best street artists in the world. He’s also one of the most highly sought-after Colombian artists and now commands large fees for his projects. His best-known images are vast, yellow-faced human figures, based on photos he takes of people he meets during his travels. Stinkfish’s work can be seen across the world, and many of his murals adorn buildings in Bogotá. 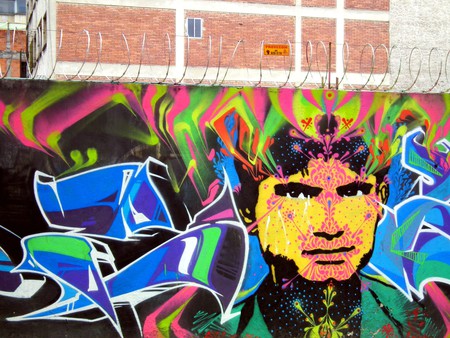 An up-and-coming street artist who is also the founder of the popular Comuna 13 Street Art tours in Medellín, PerroGraff is a Medellín native who trained as an architect and paints large, colorful, stylized murals, many of which can be seen on his engaging and informative graffiti tours.

Toxicomano is a street-art collective that grew out of a punk band; the punk aesthetic is evident in their fanzine-style murals and one of their central characters, Eddie the Punk. They’ve become, perhaps, the most important political art collective in Colombian graffiti. Their work is anti-capitalist and anti-imperialist, and often plays with advertising slogans to subvert their messages. 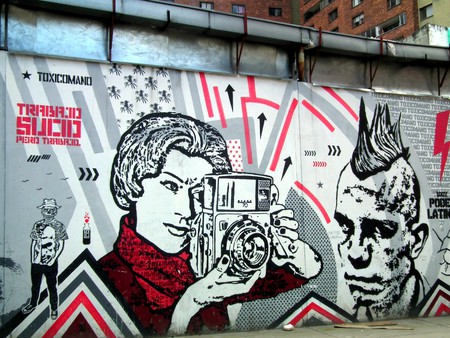