Medellín v Bogotá: Which City Is for You? 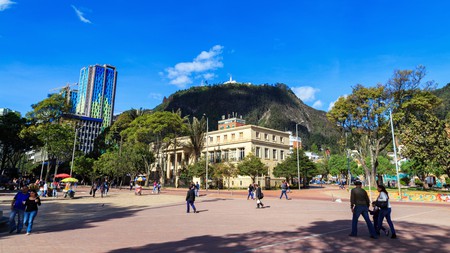 This is the tale of two cities, Bogotá and Medellín, in the South American country of Colombia. Both combine the best of traditional and modern influences, in a melting pot of nightlife, hotels, architecture styles and historic attractions. But which one is for you? Read on to find out.

Tempted by both cities? Culture Trip has you covered with our epic eight-day Colombian Andes adventure, led by our local insider.

Bogotá, Colombia’s capital, is home to around 8 million people and is situated in the Andes mountain range at an altitude of 8,660ft (2,640m), making it the fourth-highest city in the world. It covers an area of around 986sqmi (1,587sqkm) and has a population consisting of both Colombians and immigrants, all of who help provide a mixture of history, tradition and international influences.

Medellín was once known for being the “most violent city in the world”. But, after the last 25 years of urban regeneration, the city has increasingly been seen as a popular metropolitan city and is losing its past dark image. With a population of over 3.7 million, it is significantly smaller than Colombia’s capital, both in population and area (236.5sqmi, or 380.6sqkm). Often referred to as La Ciudad de la Eterna Primavera (the city of eternal spring), it is lower in altitude than Bogotá, at a height of 4,905ft (1,495m).

Medellín has an average yearly temperature of 22C (72F); the highest temperature it reaches is 28C (82F), and the lowest is 17C (62F). Due to its low altitude, and Colombia’s proximity to the Equator, the country has no real seasons (just wet and dry periods), so Medellín boasts a year-round spring-like climate.

Bogotá is located high in the Andes mountain range, giving it a slightly colder climate than Medellín, with an average year-round temperature of 15C (58F). The temperature can sometimes hit 20C (68F), and it gets as cold as 5C (41F). 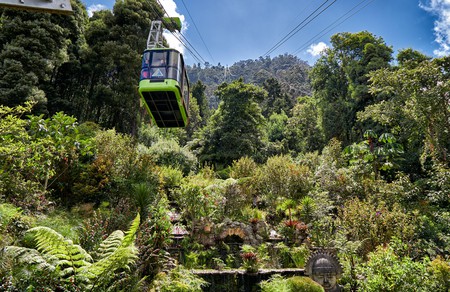 Bogotá was founded in 1538, and its vast size and historic culture provide a large number of things to do around the city. There is a great number of museums and landmarks, such as the mountain Monserrate, the old neighborhood La Candelaria and the Salt Cathedral of Zipaquirá, which is located underground. Bogotá has been heavily influenced by its past: a number of the neighborhoods in the city are Spanish-influenced, and it also has buildings built using British and French architectural styles.

International influences also stretch to restaurants; there are many cosmopolitan brands based in Bogotá and also restaurants offering a range of cuisine styles, for example, Chinese and Peruvian. The city has a large number of shops, restaurants, outdoor activities, parks, concerts, festivals and other events. Musicians tend to choose to play at the Colombian capital instead of other places outside the city. Bogotá is also rapidly becoming well-known in the art world, with new galleries opening and artists and collectors choosing to visit the various art fairs and events.

Medellín contrasts with Bogota as it is newer – founded in 1616 – and more contemporary and metropolitan. The city has completely rejuvenated itself through urban restructure and revitalization. As such, it has completely changed over the last 25 years, moving away from its troubled past to win awards and gain recognition. In 2013, The Wall Street Journal named it Innovative City of the Year, and Medellín was also the recipient of the Veronica Rudge Green Prize in Urban Design (awarded by Harvard University).

While the city cannot compete with the historic landmarks in Bogotá, it does offer its own small number of museums, public gardens, festivals and music events. Medellín doesn’t possess the international influence of Bogotá, but it does offer a small variety of cuisine options, a good nightlife scene and an authentic Colombian experience. 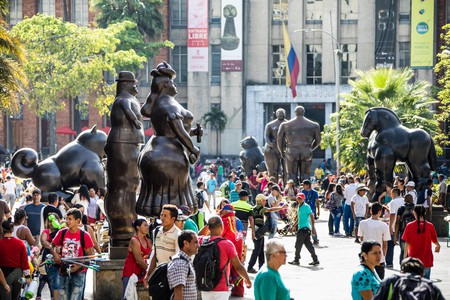 Bogotá’s vast area is covered by 74mi (120km) of bus routes that connect the city through six lines from north to south and east to west. Due to the city’s huge population, much of the time, the buses and roads are heavily crowded with people and cars. Despite this, Bogotá still manages to function, and an additional transportation system is planned for the coming years. The city is home to the largest airport in Colombia, El Dorado, which is located within the city’s limits and has direct flights to over 25 Latin American cities, seven European cities, 10 US cities and Canada (as well as over 30 Colombian cities).

Medellín, thanks to its heavy regeneration, has undergone exceptional transportation upgrades over the last 25 years: the city now has an above-ground Metro system with three interconnected cable car lines, tram routes and bus routes. The city is very well connected even up into the mountains. Although it is significantly smaller than Bogotá, and has less traffic and fewer people using the systems daily, Medellín’s transportation systems are unrivaled worldwide; other countries around the world use the city as a model to improve their own systems. The airport in Medellín, however, isn’t as well connected as the one in Bogotá: located 40 minutes outside the city, it has direct flights to five Latin American cities, one European city, three US cities and nine Colombian cities. 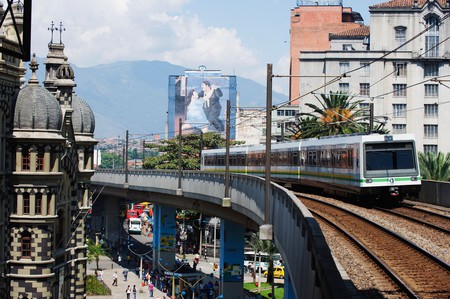 Both cities have positive and negative aspects, but, ultimately, they offer unique city experiences and should not be missed when visiting South America.