How to Discover Anthony Bourdain's Colombia 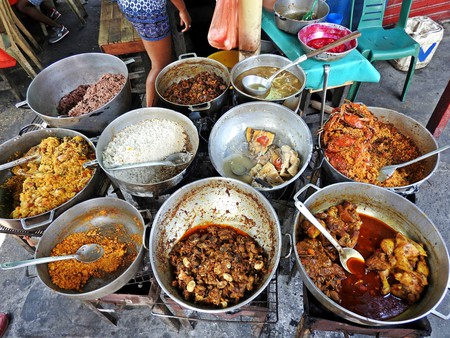 The world-renowned chef had a soft spot for the food and culture of this South American country. Here’s how to follow in his footsteps and discover Anthony Bourdain’s Colombia.

Although Anthony Bourdain travelled all over the world while filming his shows Parts Unknown and No Reservations, there were only a few countries that the iconic chef returned to, and one of those was Colombia. Bourdain regularly professed his love for Colombia, even proclaiming that he couldn’t believe “that this country exists and everyone doesn’t want to live here”. He did more for Colombian tourism than perhaps he realized. Here’s a guide to discovering what he loved about Colombia.

A hallmark of Bourdain’s career was his constant willingness to go beyond the ‘fancier’ foodie destinations and get up-close-and-personal with the real people behind the gourmet cuisine. So when the intrepid chef paid a visit to Cartagena, where did he go? Naturally, he made a beeline for Bazurto Market, the busy fish market on the outskirts of the city. Bazurto is crowded, chaotic and a little bit nerve-wracking for first-timers, but take the time for a visit and you will be rewarded with some of the tastiest and freshest local seafood dishes on offer in the Colombian Caribbean.

Eat a bandeja paisa in Medellin

The most typical dish in Medellin is the delicious “heart attack on a plate” that is the bandeja paisa; a huge serving of beans, rice, meat, crackling, chorizo, plantain, and an avocado (that’s the healthy part!). Bourdain enjoyed his as a hangover cure in the company of a local chef, but wander into any typical Medellin restaurant and it’s the first thing you’ll spot on the menu. What finer way to pay tribute to the outsized culinary passions of the great man than by stuffing yourself fit to burst in the pleasant climes of Colombia’s second city?

Anthony Bourdain wasn’t one to shy away from the harsh realities of the world, yet he had a disarming manner of getting straight to the heart and soul of a country without ever appearing insensitive or opportunistic. Rather than simply sticking to the tourist spots in Colombia, he headed deep into the jungle to the heartland of cocoa production: the isolated city of Miraflores in Guaviare region, where he learned firsthand about the challenges and conflicts facing rural Colombians. Although it can be tricky to visit Miraflores, the regional capital of San Jose del Guaviare has also opened up to tourism and is home to some spectacular landscapes and cultural sites.

Dine in style at Tábula

It wasn’t just street food and off-the-beaten-track travel for Bourdain in Colombia, though; he also spent time with some of the country’s top chefs and dined in style at their restaurants. As well as La Cevicheria in Cartagena (also highly recommended), he enjoyed a quality meal at Tábula, alongside the chef Tomás Rueda, one of Colombia’s most innovative young culinary masters. After a shopping session in Paloquemao Market, the two retired to Tábula’s opulent dining room to enjoy the fruits of Rueda’s culinary imagination.

Fish stew in the desert

After a hair-raising accident while mucking around on ATVs in the deserts of La Guajira, our hero cooled off with a few cold beers and shots of aguardiente (the local liquor) on the beach of Mayapo. Bourdain also tucked into a delightful helping of cazuela de mariscos, a creamy Caribbean seafood stew served with coconut rice and plantain. There might not be a tastier dish in all of Colombia, and there’s no better spot to enjoy one than at a beachside shack in the desert, gazing out at the sunset over the blue waters of the Caribbean sea. 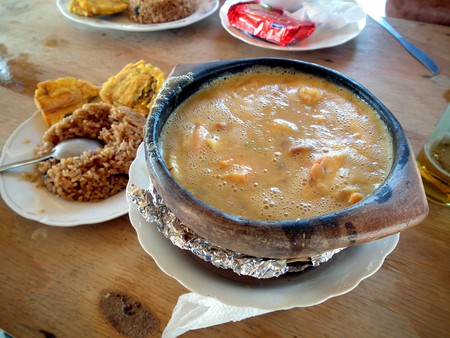 Bogotá’s oldest restaurant, founded back in 1819, is also the place to sample the capital’s most iconic traditional dish: ajiaco. It’s a hearty soup made of three types of potatoes and chicken and served with dollops of cream and lashings of capers. Bourdain enjoyed his in the company of renowned Bogotá writer Héctor Abad Faciolince, while wrestling with the confusing realities of the Colombian political situation. You don’t have to do that last bit, but definitely make time for a trip to La Puerta Falsa on a visit to Bogotá. You can also sample tamales and the unusual but delicious hot chocolate and cheese combination so beloved by Bogotanos. 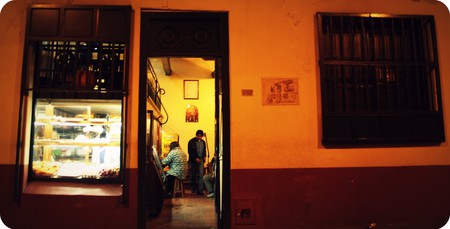 What could be better than a national sport that revolves around blowing up gunpowder with airborne hunks of metal, while drinking copious bottles of cold lager? “Not much” was Bourdain’s accurate analysis of tejo, Colombia’s most traditional “sport”. He enjoyed a beer-soaked game with the Colombian band Ondatropica in the city of Cali, but the game can be enjoyed throughout the Andean region of Colombia, with most tourists partaking in either Bogotá or Salento.