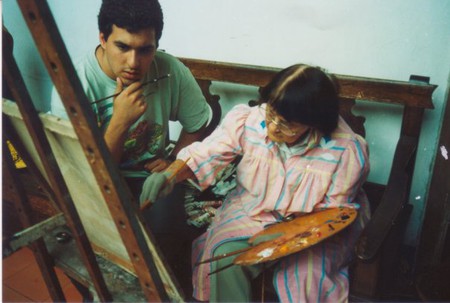 Débora Arango (1907–2005) was a Colombian painter, ceramicist and graphic artist born in Medellín. She painted controversial subjects, including members of the Roman Catholic church, dictators, and those very rarely portrayed on canvas: women in jail or prostitutes. The feminist artist’s brave choice of subject matter meant that her work was heavily overlooked while she was alive. These are seven works which encapsulate her oeuvre, all currently being displayed by the Museum of Modern Art in Medellín.

This expressionist-style painting was received with a mixture of negative and positive reviews at the time it was painted. Justice (seen below on the right) was created to bring to light the effects of prostitution on women, and indeed, here, a woman can be seen surrounded and handled by a number of men.

Débora Arango painted Amanecer (Dawn) in 1940. This scene shows a couple dressed smartly seated at a clothed table. The woman, bored or asleep, has her head in her hands – behind her, a man, who’s supposedly her partner, is looking at another woman whose eyes her downcast.

The graveyard in this painting can be seen as analogous to the graveyard of people killed through the La Violencia. Arango included a self-portrait within the picture to show that her, or anyone else for that matter, could have also been victims of the massacre.

Los Derechos de la Mujer was painted by Débora in 1954. Within it there are two women dancing happily, and two men – one being crushed and the other standing tall. Translated, this painting means ‘women’s right’s’, and displays the women being strong in the face of men.

Adolescencia (seen below in the middle) was painted by Débora Arango in 1944 and portrays a women looking sexually vulnerable. The women is covering her face and eyes to suggest distress, or a wish to be removed from her surroundings, and her crossed-legged position makes her defenceless on the murky, green ground.

Débora’s watercolour, Sin Título, is a painting of a nude female, created in 1954. The painting’s figure seems anguished, sad and lonely, distressed on the bed. At the window is an mocking, elegant women. The painting blurs the boundaries between private and public, human suffering and artistic experimentation. Currently displayed in the Museum of Modern Art in Medellín, the painting can also be in the above photograph, on the left hand side.

El tren de la Muerte (the Train of Death) was another one of Débora’s paintings that challenged the Colombian government’s La Violence programme. This painting emphasises the thoughtlessness behind the slaughter of thousands of innocent people.

Many of Débora’s paintings are seen all over the world today; she’s known as one of the greatest and most important Colombian artists.