A Brief Guide to Colombian Slang 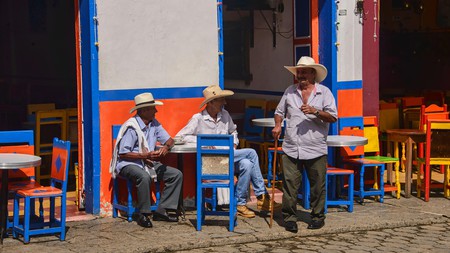 Before visiting Colombia, learn some Colombian slang words to help you fit in better with the locals | © Raquel Mogado / Alamy Stock Photo

Despite slightly varying accents between regions, the main language in Colombia is Spanish, and it’s often easy to understand. As a result, it’s a great place to learn the lingo or improve your fluency. But Colombians have unique slang words and phrases with some surprising meanings. The following list will help you improve your understanding – and enhance your social interaction – while visiting the South American country.

Translating directly as “with pleasure,” this phrase is used as a gesture to thank someone. An equivalent would be “no problem” or “you’re welcome.”

While this translates directly as “Chinese,” Colombians use it to refer to a boy or girl. “Hola, china,” for example, means “hey, girl.”

If you ask for a tinto in a restaurant, you’ll get a small coffee without milk.

This phrase is a form of introduction and is similar to “what’s up?” Colombians use this as a greeting between friends.

Many Colombians have or may visit a finca for the weekend or a holiday; it refers to a farm or country house away from the city.

Guaro is the abbreviated form aguardiente, a Colombian alcoholic drink, usually downed as a shot. It’s sold in cartons and bottles, the latter of which is often shared between a group at an evening social event. If you drink too much guaro, you may end up with a guayabo (hangover).

Same as the Spanish phrase “lo siento,” which means “I’m sorry” or “excuse me.”

Similar to “cool” or “great.” Something or someone can be chévere. An alternative is bacano.

This word describes someone born in Bogotá to parents who were born elsewhere. If you are a Paisa, you are native to the Paisa area of Colombia – for example, Medellín. If someone is from Bogotá, they could be known as a Bogotano or Rolo. If you are from the coast of Colombia, you could be referred to as a Costeño.

This phrase translates as “at your service” or “can I help?” It’s used frequently by waiters, restaurant staff, shopkeepers and service staff.

While it directly translates as “silver,” Colombians use “plata” to refer to money in general.

These words translate as “fat,” but Colombians often use it as a term of endearment.

A commonly used short form of “buenos dias,” “buenas noches” or “buenas tardes.” It’s a way to say “hello” or “good morning/evening,” and it’s used as a short and easy term to welcome or say “hi” to an individual.

Meaning “give me one,” this phrase is an enthusiastic response of approval and agreement; it’s the English equivalent of “let’s do it,” “let’s go” or “yes, absolutely.”

While this phrase translates as “switched on” – like a light bulb – it means to be “tipsy” or “merry,” like when you’ve had a couple too many drinks.

This one means to be “drunk” – when you’ve gone beyond “prendido.” In Colombia, it’s not a compliment.

In Colombia, “guayabo” is a guava tree, and if you have guava, it doesn’t necessarily mean you’re holding the tropical fruit. To be guava-ed (enguayabado) is to have what you can’t bear the morning after being jincho: a hangover. Admit it: “Estoy enguayabado.”

This phrase means “how cool” or “awesome.” It’s used when “chévere” isn’t quite enough.

This word means a party – usually a dance party. And if someone in Cali calls you a “pachanguero” or “pachanguera,” then it means you are not only a carouser but also a great salsa dancer.

As in “vamos a rumbear” meaning “let’s go partying” not “let’s go dance the rumba,” although that might be involved. In Colombia, every party is a dance party.

This phrase means “to do something carelessly.” It’s commonly used in the department of Antioquia, particularly in Medellín.