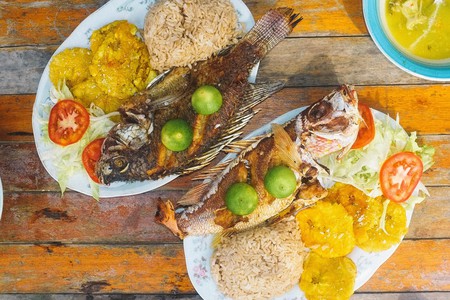 Colombia is blessed with a rich and diverse culinary culture, with a range of traditional dishes common in each of its five distinct regions—Amazon, Orinoquia, Pacific, Andean, and Caribbean—and many distinctive and unique ingredients. However, the food of the Colombian Caribbean coast is rightly seen as some of the most delicious in the country, so here are eight of the tastiest traditional dishes.

This thick, seafood stew is a staple of Colombian Caribbean cuisine. The Cazuela de Mariscos can also be found on the Pacific coast of Colombia, but is especially connected to the Caribbean cities of Cartagena, Barranquilla, and Santa Marta. A hearty mix of white fish, squid, shrimp, prawns, and lobster, all served up in a rich, creamy broth with a side of rice and fried plantains, the Cazuela de Mariscos is just about the best dish to try on the Colombian Caribbean coast. 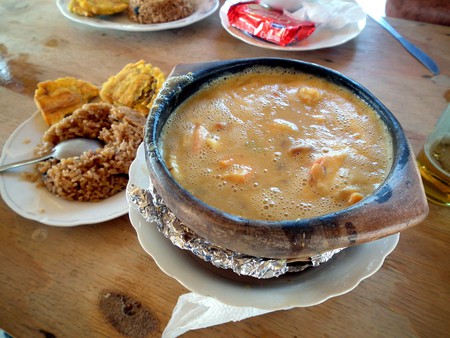 The staple side-dish of most Colombian Caribbean coast dishes, coconut rice can be found alongside patacones (flattened, fried plantains) on most plates in nearly every restaurant in the region. Prepared simply by cooking white rice in coconut milk and/or coconut flakes, it’s simple, delicious, and delightfully Caribbean.

There’s nothing more Caribbean to eat in Colombia than a plate of fried fish served with coconut rice and patacones. This dish, generally made with either red snapper or mojarra fish, is found everywhere on the coast, and its beauty is in its simplicity: the fish is fresh, crispy, and full of flavour, and is complemented perfectly by the coconut flavour of the rice. Just a twist of lime and it’s ready to eat: the ultimate Caribbean delicacy. 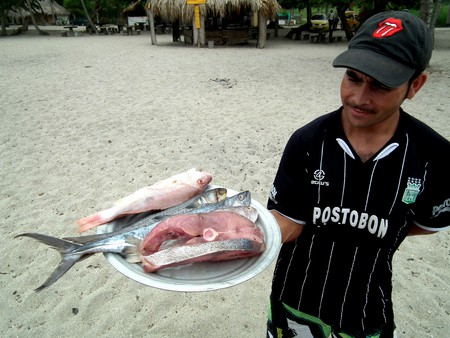 Somewhere between yoghurt and sour cream, suero costeño is typically served as an accompaniment to many other traditional dishes on the Colombian Caribbean coast, yet it makes for such a tasty condiment that it often ends up being people’s favorite Caribbean food when they visit Colombia. First introduced by Middle Eastern immigrants in Barranquilla, it is a fermented, milk-based food which goes brilliantly with patacones and fried fish.

While lobster is hardly uniquely Colombian, there’s no better dish to enjoy on a trip to the northern coastal deserts of La Guajira than a freshly caught lobster, served whole, and poached in some butter and garlic. Typically served (as much of the food is on the Colombian Caribbean coast) with patacones and coconut rice, the incredible value and fresh flavour of a Guajira lobster is a true treat for any foodie traveler on the coast. 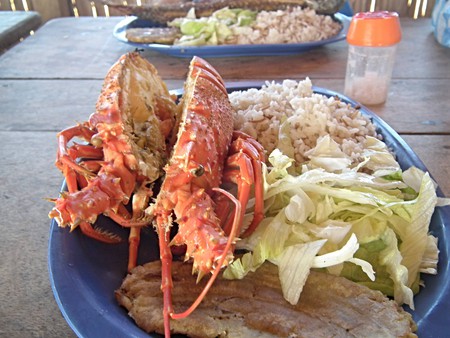 This Afro-Caribbean dish is traditional on the Colombian Caribbean islands of San Andres and Providencia. Rondon is a hearty soup made up of a fish fillet mixed with other seafood, as well as coconut milk, plantain, vegetables, peppers, and spices. Its name is actually an anglicized version of the words “run down,” and refers to the act of going down to search for the vegetables used in making this tasty dish.

This costeño spin on the classic Colombian and Venezuelan arepa was invented in Atlantico department, supposedly in the small town called Luruaco near Barranquilla. They can now be found all over the country. This double-fried arepa filled with a fried egg might not be the healthiest choice out there, but when served fresh and piping hot with some salt and spicy sauce, it’s as tasty a snack as can be found on the Colombian Caribbean coast.

Cocadas are a coconut-based dessert snack enjoyed throughout Latin America, and cocadas blancas are especially traditional on the Colombian Caribbean coast. Made of freshly grated coconut, sugar, coconut water, whole milk, and a pinch of cinnamon for added flavour, these delicious little mouthfuls of sweet coconut can be found for sale throughout the region, but are especially common in Cartagena. A brown version of the cocoada is also made with panela, or sugar cane syrup.