8 Hummingbird Species You Can Only Find in Colombia 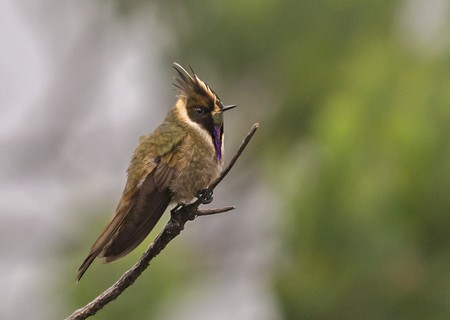 Colombia is home to 73 endemic bird species, 8 of which are hummingbirds. Ranging from little hummingbirds with nests the size of a thimble to crested hummingbirds living in the high moorlands of the Andes, here are 8 hummingbird species that can only be found in Colombia.

Perhaps the rarest and hardest to see of the endemic hummingbird species of Colombia, the Blue-bearded Helmetcrest was thought to be extinct (it hadn’t been confirmed in the wild since 1946) until it was rediscovered in 2015. It lives in the high paramos (a kind of moorland) of the Sierra Nevada de Santa Marta Mountains, and if you want to see it, an expedition is required (roughly six days of walking and around 60 km, or 37 miles, distance). 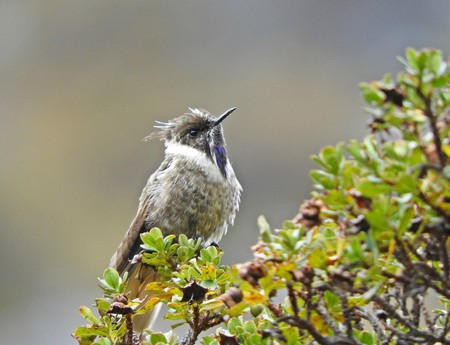 Another of the helmetcrest family (there are three in Colombia and one in Venezuela), the Buffy Helmetcrest is also the easiest of the three to see in Colombia, as well as being endemic to the central Andes. It also lives in the paramos but in the much more accessible Los Nevados National Park, where it can easily be seen and photographed perching on plants near the visitor’s centre.

The third and final of the Colombian Helmetcrests is also much easier to see than the Blue-bearded Helmetcrest, but nonetheless, it can prove tricky. It’s best spotted in the paramos of Chingaza National Park near Bogota, where it feeds on the yellow flower of plants known as frailejones. Once seen, however, there’s no mistaking this stunning little bird, with its green beard and crest. 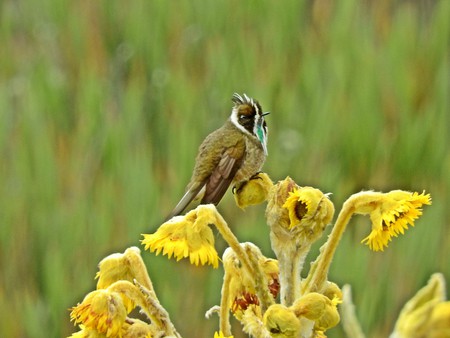 Formerly simply known as the Blossomcrown, this delightful little hummingbird with a white spot on its forehead was recently divided into two unique and endemic species: the Tolima – or Andean – Blossomcrown and the Santa Marta Blossomcrown. The Santa Marta version is much trickier to see, but the Tolima Blossomcrown can be spotted relatively easily coming to feed on flowers in the garden of the lovely Ukuku Rural Lodge in the Combeima Canyon.

An endemic hummingbird from the Sierra Nevada de Santa Marta, the White-tailed Starfrontlet is a large species with a distinctive flash of white in its tail. It’s not a common bird by any means, but can be seen pretty easily visiting the hummingbird nectar feeders at El Dorado Bird Reserve above Minca. 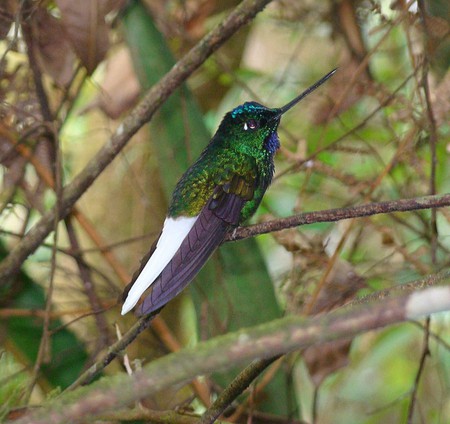 The hardest endemic hummingbird to see in Colombia, the Chiribiquete Emerald is a dream species for any birder. Living only on the isolated stone massifs of Chiribiquete National Park – one of the planet’s last true wildernesses located in a jungle area the size of Switzerland – this hummingbird has probably only been seen by a handful of people!

One of the four Inca species in Colombia (and the only endemic one), the Black Inca is extremely threatened by habitat loss and is classed as endangered. The good news for hardcore birders is that it can be seen relatively easily in the cloud forest natural reserve of Chicaque, just a couple of hours from Bogota. It doesn’t visit the hummingbird feeders but regularly arrives to feed on flowers in front of the lodge. 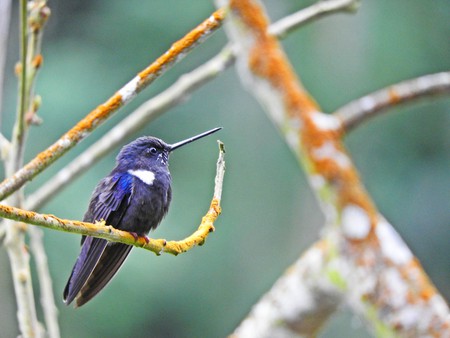 The Woodstars are the smallest family of hummingbird – most of them measure no more than 6 or 7 centimetres (roughly 2.5 inches) – and there are several species in Colombia. The only endemic one is the diminutive Santa Marta Woodstar, confined to the mountains of the Sierra Nevada de Santa Marta on the Caribbean coast. It isn’t always easy to see, but like the aforementioned White-tailed Starfrontlet, it can be seen with relative ease at the El Dorado hummingbird feeders.