8 Famous Champeta Musicians You Should Know About 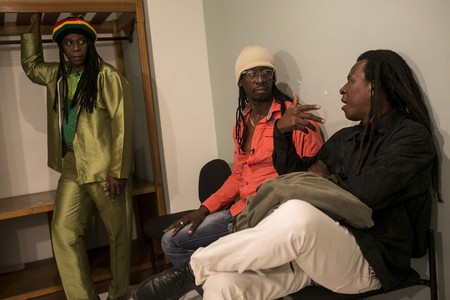 Champeta music is ‘the most explosive rhythm coming out of the Caribbean’s belly since the end of the century,’ according to Lucas Silva, founder of Palenque Records. Born from the sound system culture of Barranquilla and the Afro-Colombian traditions of San Basilio de Palenque, this genre continues to be one of Colombia’s most popular musical exports. Read on to discover eight legendary champeta artists.

Often called the ‘Godfather of Champeta’ or the ‘King of Psychedelic Champeta,’ Abelardo Carbonó was born in 1948 in the small coastal town of Cienaga and started playing guitar as a small boy, at eight or nine years old. In the 1980s, after two decades of working as a policeman in Barranquilla, he decided to make a change and formed a band with his brothers. His pulsating tracks and searing guitar sound, inspired by the African records played in Barranquilla at the time, have made him into one of champeta’s most iconic stars.

A band that embodies the essence of champeta music, Wganda Kenya was formed by legendary salsa musician ‘Fruko’ and the label Discos Fuentes in Medellín. Several of their well-known tracks reference and recompose classic African records, the way jazz musicians rearrange standards, or like a modern-day remix. This practice started because coastal DJs typically ripped off the labels of the African records they played, in order to keep their rivals from stealing a march on their sound and, consequently, many tracks ended up being rerecorded and changed by local musicians. Wganda Kenya’s classic track ‘Shakalaode,’ for instance, is pretty clearly a variation of Fela Kuti’s ‘Shakara,’ but with a Colombian twist.

Tribu Baharú was born in the Colombian capital of Bogotà, far from the traditional heartland of champeta music, although their members mostly hail from the Caribbean coast. Steeped in the traditional sounds and rhythms of champeta, the band have suggested that — as with many classic champeta bands — the majority of their influence stems from the soukous they would hear at sound system parties when they were growing up on the coast.

Justo Valdez is a founding member of Son Palenque — arguably the most influential Afro-Colombian band of all time. Valdez was born in the small Caribbean village of San Basilio de Palenque, which is generally considered the spiritual birthplace of champeta, alongside Barranquilla. His band (with whom he still performs today) were instrumental in shaping the future sounds of champeta, and many of their classic tracks carry all the hallmarks of the genre. However, it was as a solo artist in the 80s that Valdez recorded his purest champeta tracks.

Another band from San Basilio de Palenque, Las Estrellas del Caribe first started making music together in 1975. However, other than a couple of singles released back in the 1980s, their musical output was almost non-existent until a young musician named Franklin Tejedor (one half of the popular musical duo Mitú, and the son of one band member) decided to finally record their classic champeta music. The compilation album Estrellas del Caribe: champeta criolla desde San Basilio de Palenque finally cemented the band’s deserved reputation as pioneers of the champeta scene.

One-third of the so-called ‘Holy Trinity’ of champeta music (along with the following two artists), Viviano Torres was born in Palenque and was an original member of Son Palenque. He then formed the band Anne Swing, a group who many experts have claimed essentially gave birth to champeta as a genre. As the oldest of the famous trio, Viviano Torres is perhaps the single most influential figure in champeta’s history.

Nicknamed ‘the Golden Voice of Champeta,’ Louis Towers was born in Palenque in 1962 (he’s also related to Viviano Torres, and is Charles King’s nephew, in spite of being four years older than him). He has also been credited with internationalising champeta as a genre, as he travelled and toured in North America and Europe. Blessed with a keen ear for trends in music, Towers was able to bring champeta to a whole new audience by fusing elements of it with reggae and rap, and arguably did more to modernise the genre than most.

The third of the ‘Holy Trinity,’ Charles King is often credited with fuelling the expansion of champeta from its traditional Caribbean coastal enclave to the rest of the country. Two gigs he played in Bogotà in 2005 are said by many to have put champeta on the map in the taste-making capital, and from there it spread in waves throughout the country. He started off his musical life as a backing singer in Anne Swing, but really made his name when he started recording solo records in 1997.