7 Colombian Musicians to Know About Who Aren’t Shakira 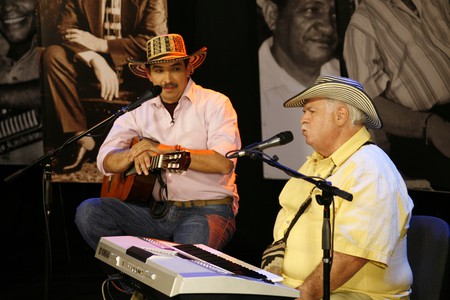 Colombia is said to be the “land of a thousand rhythms” with a mix of traditional and modern music varying by region and community. Colombian music has been influenced by Africa, indigenous Africans, native Colombians, Europeans, Spanish and Americans. Colombia’s biggest worldwide and top selling artist is Shakira, but there are also other Colombian artists taking the world by storm. Here are seven to watch.

Popular genres in Colombia include: native pop and rock, salsa, cumbia (a mixture of Spanish and native African influences), champeta (a mix between African and Jamaican rhythms) and vallenato (Colombian folk rhythms made using drums, accordions and sugar cane sticks).

Carlos Vives is a Colombian Grammy award-winning artist from Santa Marta. His music is a mix of vallenato and pop, and he was also featured on the hit single “La Bicicleta” with Shakira. Vives started his music career in 1993 in a band called La Provincia, which was a mix between Caribbean rhythms, rock and pop music. Vives has released 12 solo albums and has had four Grammy nominations, two of which he won.

Juanes is a musician, singer, songwriter and humanitarian born in Medellín, Colombia. Juanes started his career in a band called Ekhymosis and released his first solo album in 2000, and has since sold over 15 million albums worldwide. Juanes has won two Grammys and 20 Latin Grammys for his music. He has released seven albums and has produced music with the Rolling Stones. Juanes has had number one singles in America, Europe, Australia, Asia, Africa and New Zealand, and many believe he is the most important Colombian musician of this generation.

Fonseca is a composer, musician, singer, songwriter, activist and record producer from Bogotá, Colombia. He has created music in multiple genres including vallenato, cumbia, tropipop (or tropical pop, a blend of pop with Latin and Caribbean influences), Latin pop and Colombian pop. In 2002 Fonseca released his first album called Fonseca, since which he has released a further four albums. Fonseca is signed to Sony Music and has toured with both Shakira and Juanes. Fonseca is an activist who strives to “change the world’s view of Colombia” through his music and influence.

Andres Cepeda is a singer and songwriter from Bogotá, Colombia, who started his career in Latin pop-rock group Poligamia with a group of friends. In 1999 he released his first solo album and has since released seven more solo albums. Andres Cepeda is a Latin, pop, rock and jazz musician producing a variety of music in a number of genres. His album El Carpintero reached quadruple platinum in Colombia.

La 33 is a unique salsa band from Colombia’s capital Bogotá, achieving success around the world. Made up of 12 members and started by brothers Sergio and Santiago Mejia in 2001, this salsa band have produced four albums and made salsa popular around the world, most recently touring in Australia and New Zealand. This popular band have had success in Europe, North America, South America, the Far East, Africa and the Middle East, giving recognition to Bogotá and Colombia in the music world.

Jorge Celedón – otherwise known as Jorgito Celedón – is a Colombian vallenato singer and musician from Villanueva, La Guajira, Colombia. Celedón started his career as a backup singer in a vallenato band but moved on to become a solo artist, and has worked closely with many musicians, most famously Jimmy Zambrano and Gustavo Garcia. In July 2008, Celedón famously performed in front of the White House and then-President George W. Bush at the Colombian Independence Day celebrations.

Andrés Cabas – so popular he’s sometimes simply known as Cabas – is a Colombian musician from Barranquilla, who produces his own variety of Caribbean-sounding music. This former school music teacher was inspired to create his own genre of music which fuses Colombian and rock music together to form a unique sound. Cabas has released seven albums and has found fame all over Latin America, singing in both English and Spanish. He currently divides his time between Bogotá, Miami and Mexico City.

Music is popular in Colombia, with artists singing in both Spanish and English; music is important to Colombians as they love to socialize and dance. These artists are very popular within the country, and they are attempting to take their music and influences worldwide while carrying a positive name for the country.