25 Surreal Places in Colombia That Were Made For Instagram 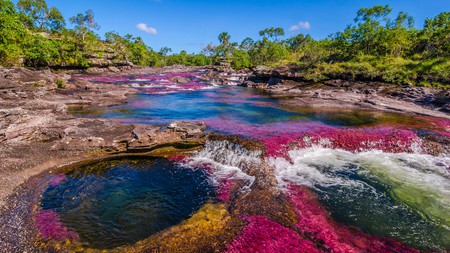 Colombia is one of the world’s most beautiful and biodiverse countries, and more and more travellers are waking up to this long-overlooked South American country’s extraordinary travel potential. Colombia is also full of bizarre sights, making it a paradise for photographers and Instagrammers. Here are 25 surreal places in Colombia that will set your Instagram feed alight.

Fancy rolling down giant desert sand dunes straight into the sparkling waters of the Caribbean? At the Taroa Dunes you can do exactly that – here, at the northernmost point of South America, the Guajira Desert meets the sea, making for one of Colombia’s weirdest destinations. 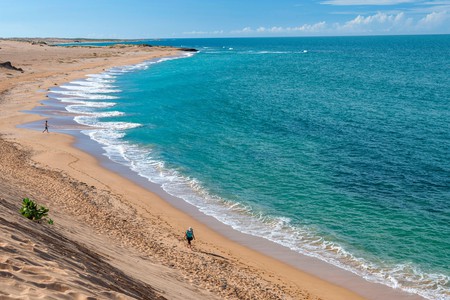 Known locally as “the rock with the best view in the world,” El Peñón is a giant rock (believed by some to be a meteorite) jutting out of the middle of a labyrinthine network of lakes and coves in Antioquia department. It stands out for miles around, and the 740 steps to the top reward energetic climbers with panoramic views over a spectacular vista of sparkling blue waters as far as the horizon.

The red river of Las Gachas has become something of an Instagram celebrity in recent years, with people from all over the world travelling here in order to get a picture of themselves sitting in its surreal jacuzzi holes, or a video sliding along the slippery river bed into the water-filled craters. Located just outside the pretty town of Guadalupe, Las Gachas is about as visually surreal as it gets. 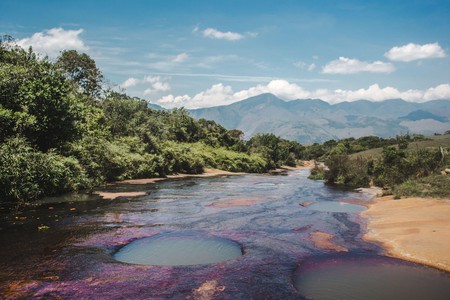 A truly off-the-beaten-track Colombian destination, the Mavecure Hills are three giant rock hills – remnants of the Guiana Shield, which predates the division of America and Africa – jutting out of the jungles of the eastern department of Guainía. Visitors can camp out on the sandy beaches of the Inirida River overnight (with some of the best stargazing in Colombia) and climb the ancient hills at dawn for incredible 360° views over the rainforest. The hills were also recently featured in the Academy Award-nominated Colombian film The Embrace of the Serpent.

The historical centre of Colombia’s capital isn’t especially surreal in itself, but it is an Instagrammer’s dream, thanks to its remarkable street art, with giant murals and small political stamps seemingly to be found on every single street. The best way to experience this amazing local art scene is on the Bogota Graffiti Tour, which explains the culture and history of Colombian graffiti and visits all of the best pieces in the Old Town. La Candelaria is like a giant open-air art gallery, making it a great spot to play around with those filters. 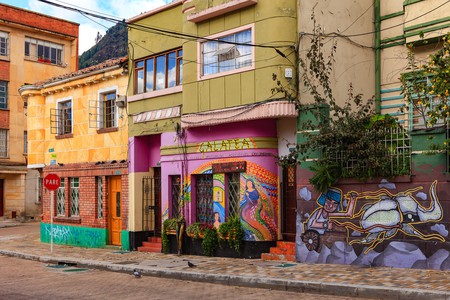 This jungle lake, in the lesser-known jungle region of Guaviare, is a blackwater lake, which gives it one especially stunning characteristic: the clarity of the water means that, on a calm day, it acts as a perfect mirror to the sky. Visitors can paddle around the lake on their own wooden dugout canoe, enjoying the beautiful sight of the blue skies and dramatic clouds of Guaviare perfectly reflected in the waters of the lake.

The comunas of Medellin, once some of the most dangerous and no-go neighbourhoods on earth, have been transformed, thanks to a series of innovative and creative urban development projects designed to better integrate the formerly isolated areas with the rest of Medellin. In Comuna 13 this has been achieved with an amazing network of urban escalators that connect the hillside barrio with the city centre. They even built slides to allow children to get down the hills to school in a more fun way. Sliding around the streets of Medellin’s comunas is an Instragram video hit waiting to happen. 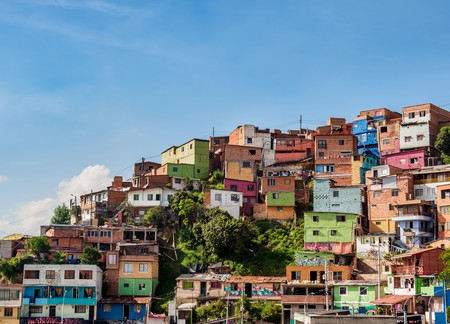 Colombia has more species of bird than any other country on earth, and they don’t come much more surreal than flamingoes. These beautiful pink birds are a year-round fixture at the beautiful coastal lagoons of Los Flamencos, a protected natural sanctuary on the Caribbean coast in Guajira department. Visitors can get remarkably close to them with local guides on wooden canoes, making for some beautiful photographs.

The Cocora Valley is home to the tallest palm tree in the world, the Quindío Wax Palm. These massive trees carpet the green valley of Cocora, close to the pretty coffee town of Salento. They stand like sentinels, alone in the wide valley, and have a surreal appearance, often being likened to something from a Dr. Seuss tale. 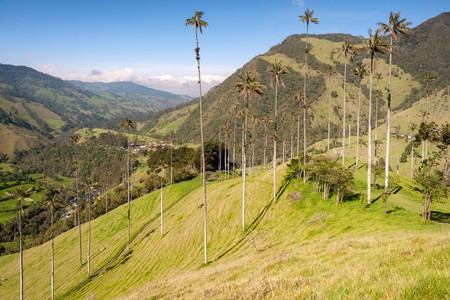 Casa en el Aire is one of Colombia’s coolest and most unique hostels: perched on the side of a cliff in the mountains of Antioquia, it also has an amazing bonus feature: a high-wire hanging out over the abyss below that supports a bunch of hammocks, which guests are free to hang from – if they’re brave enough.

Perhaps Colombia’s most well-known surreal destination, the so-called “River of Five Colours” in the jungles of Meta department is a photographer’s dream. Also known as “the river that escaped from heaven,” Caño Cristales would surely be in the running for the most beautiful river on earth. 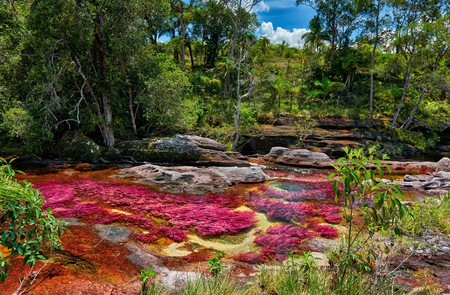 This hostel, perched high in the mountains of the Sierra Nevada de Santa Marta, overlooking the distant Caribbean Sea, is the home of one of Colombia’s most popular Instagram-friendly locations: the so-called “largest hammock in the world.” This giant rope hammock hangs out over the edge of the hillside and offers commanding views of the majestic mountains and sea. Posing for a photo in the Casa Elemento hammock is a rite of passage for an Instagram traveller in Colombia.

One of Colombia’s least-known national parks, Tuparro saw just 300 visitors in 2016, despite being the home of one of Colombia’s most incredible natural spectacles, the Maipures Rapids of the Orinoco River, described by Alexander Von Humboldt as the 8th Wonder of the World during his travels in South America. The rapids are a thunderous cacophony of noise and spray, and their most famous – and Instagrammable – feature is the surreal balancing rock, a giant boulder that has somehow remained balanced on a tiny point among the chaos. 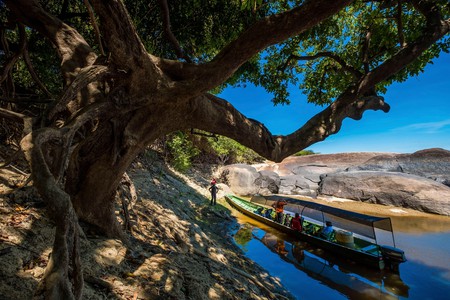 Colombia’s wild Pacific coast is barely accessible, other than by boat or light aircraft, and is one of the most beautiful and biodiverse regions of the country. Migrating humpback whales arrive in the area to give birth every year between June and October, making for some beautiful photo opportunities against the stunning backdrop of jungle-covered islands and barely inhabited coastline. Truly lucky travellers will also be able to capture an image of one of the bizarre poison-dart frogs that call these jungles home.

Colombia’s largest canyon, in Santander department, is a truly spectacular sight, and not far from the Colombian extreme sports capital, San Gil. While the canyon itself is beautiful, the best way to see it in its full majesty is to go paragliding over it, or take South America’s longest cable-car across it and back. The mind-blowing panorama from hundreds of metres in the air is a surefire Instagram hit. 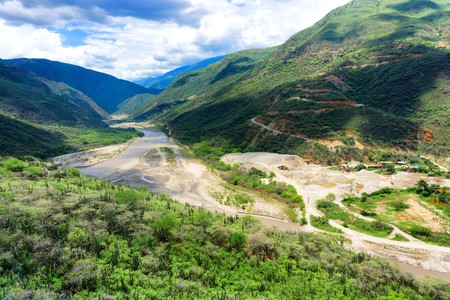 Another hidden gem in Guaviare department, Nuevo Tolima is a giant rocky hill in the middle of the jungle that hides a mystical surprise for those adventurous enough to make the journey: the giant face of the rock is covered in ancient rock paintings by an unknown indigenous culture, some dating back around 10,000 years. With blood-red images of sloths, monkeys, birds, jaguars, and more, Nuevo Tolima is Colombia’s most magical outdoor art gallery.

Home to ancient stone statues sculpted by an unknown indigenous culture thousands of years ago, San Agustín is an archaeological marvel surrounded by some of Colombia’s most beautiful Andean landscapes. The truly surreal parts, however, are the hundreds of anthropomorphic statues, depicting such bizarre figures as human–monkey hybrids and giants devouring babies. 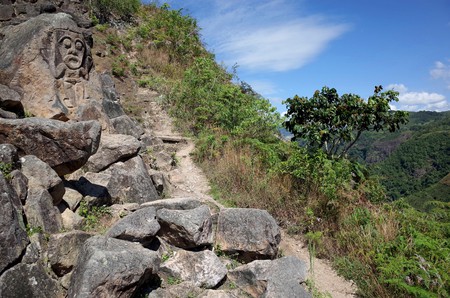 The Ciudad Perdida of the Tairona people was hidden away in the jungles of the Sierra Nevada de Santa Marta mountain range for hundreds of years and was only rediscovered in 1972. It predates the much more famous Machu Picchu by over 800 years, and can be visited on a tough four-day trek through the mountains. The reward for all the exertion though is a classic Colombian photo opportunity, with the jaw-dropping backdrop of the stone terraces of the city surrounded by the verdant green jungle.

Tayrona National Park on the Caribbean coast is a surreal place all round: crystalline blue waters, wild jungle, ancient ruined cities, and giant boulders towering over hiking trails. It conjures up images of Jurassic Park, and there are plenty of wild animals to keep nature lovers occupied. The real Instagram favourite is the vistas of Cabo San Juan beach, and the view of two mirrored beaches from a viewpoint above the sea: Caribbean perfection. 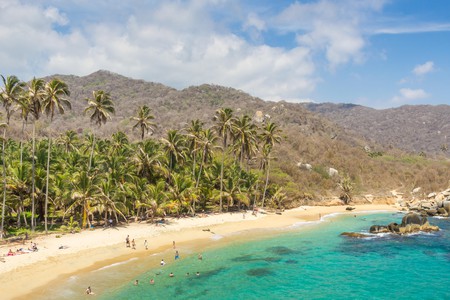 Perhaps Colombia’s coolest and most beautifully located hostel is Casa en el Agua, a floating hostel completely surrounded by the blue waters of the Caribbean and accessible only by boat. With not much more to do than sunbathe on the deck, enjoy a cocktail at the bar, or snorkel and swim in the warm sea, Casa en el Agua is sure to have your Instagram followers in fits of jealousy.

This small coastal town on the Caribbean coast is most famous for tubing: visitors can hike up into the jungle and ride inflated inner tubes down a beautiful jungle river – where recent blockbuster The Lost City of Z was shot, incidentally – right down to the sea. It’s an amazing journey, but the truly special part comes in the final stages when, on a clear day, tubers are rewarded with amazing views of the snow-capped Bolivar and Colon mountains, the highest in Colombia, and highest coastal mountains on earth. A panorama that includes snowy peaks and the sparkling Caribbean Sea is unique, and can be found in only in Palomino. 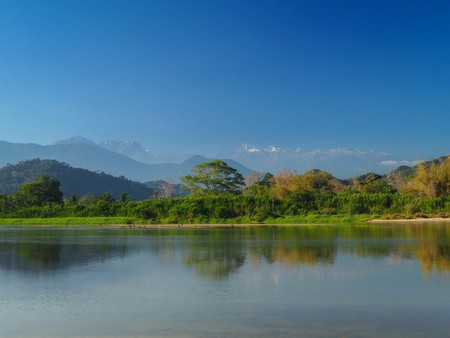 The best stargazing spot in Colombia, this large, arid region in Huila department is home to some very weird desert landscapes, including a grey, rocky area that resembles the surface of the moon, and a vast area of red earth that could be a stand-in for Mars. There is even an area where a series of massive rocks appear to have taken on lifelike shapes, including a dog’s head and a crocodile.

A short hike from the pretty coffee town of Jardin, in southern Antioquia department, is one of Colombia’s most beautiful waterfalls. The “Cave of Splendour” is a small cave, hidden away under a jungle-clad rocky overhang, with a round hole in its ceiling: from this round hole a waterfall drops into a freezing lake – you can take a swim here, but it’s not for the faint-hearted. More adventurous visitors can arrange to rappel down the falls into the cave. 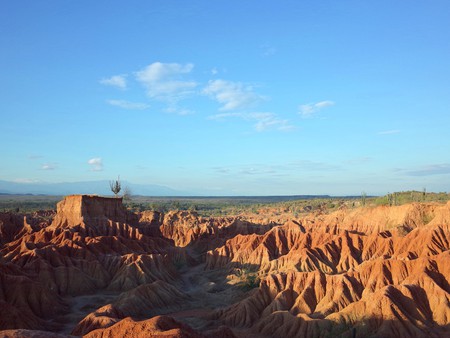 Caqueta is one of Colombia’s least visited departments, but that’s not because it lacks in amazing sights and activities. On the contrary, Caqueta is one of the country’s hidden gems, in particular, the remarkable canyon of Las Dalias Natural Reserve, a stretch of river enclosed on both sides by a remarkable high-walled canyon, covered in naturally occurring oil. The river is incredibly shallow, meaning the most intrepid of visitors can hike through the narrow canyon, enjoying the surreal views of one of Colombia’s most off-the-beaten-track destinations.

One of Colombia’s smallest national parks, Los Estoraques is a bizarre landscape defined by a series of large brownstone pedestals and columns, formed by erosion over thousands of years. The columns tower around you as you hike through the dry, dusty landscape – usually alone, as this area is very under-visited by tourists. As a bonus, the park is only a couple of miles from La Playa de Belen, one of Colombia’s most beautiful small towns. 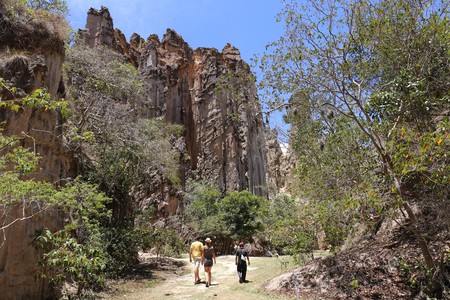