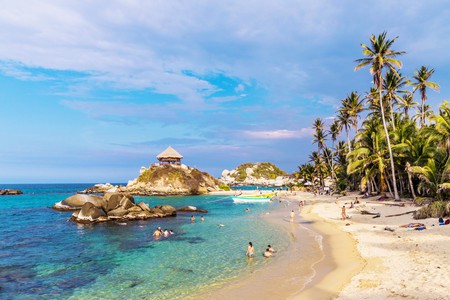 Tayrona National Park is one of the most well-known and popular places to visit on any trip to Colombia. It can definitely get busy these days, but that’s because it’s such a beautiful and unique place. So, to whet your appetite for a visit, here are the reasons why you really have to experience Tayrona National Park at least once in your life.

You can enjoy a guided hike through Tayrona National Park as part of Culture Trip’s specially curated eight-day Colombian Caribbean adventure, led by our Local Insider.

From the jungle to the Caribbean

In many ways, Tayrona National Park resembles a miniature Jurassic Park. Hike through a verdant jungle teeming with monkeys, birds and insects, past giant round boulders – which look a bit like dinosaur eggs – before arriving at the white-sand beaches and azure waters of the Caribbean. 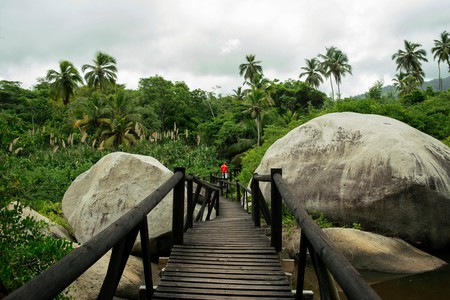 Speaking of Caribbean beaches, Tayrona is home to some of the most stunning stretches of sand in South America, and is the perfect place to enjoy some sunbathing and swimming – although be warned: you can only swim at certain beaches. Cabo San Juan, Canaveral, Castilletes, Arrecifes and La Piscina are just a few of the beautiful beaches to enjoy at Tayrona. 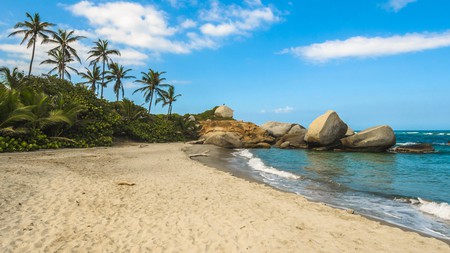 One particular beach – or beaches, to be precise – stands out in Tayrona: the mirrored beaches at Cabo San Juan, where two beaches seem to reflect each other when seen from a viewpoint on the hill above. Don’t believe us? Just check out this extraordinary photo.

Sleeping in the hammock hut

The hill mentioned in the previous point is the famous hammock hut at Cabo San Juan: a little thatched hut on the hill overlooking the beaches, jungle and waves below, which holds about 20 hammocks. It’s the most coveted sleeping spot in the entire park – and maybe even Colombia. Get there early if you want one of the hammocks. 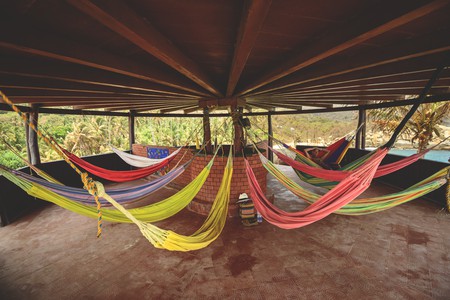 Tayrona’s idyllic position on the Colombian Caribbean coast makes for some wonderful sunrises and sunsets over the tropical waters. The best ones come from the beach at Arrecifes or Cabo San Juan, but you can enjoy beautiful dusks and dawns anywhere in the park. 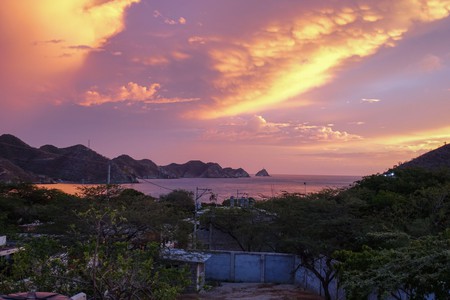 Tayrona is, first and foremost, a national park – and that’s down to the remarkable biodiversity of flora and fauna within its boundaries. From rare, endemic poison dart frogs, to giant boa constrictors, as well as plenty of birds, mammals, and insects, the park is teeming with amazing animals. 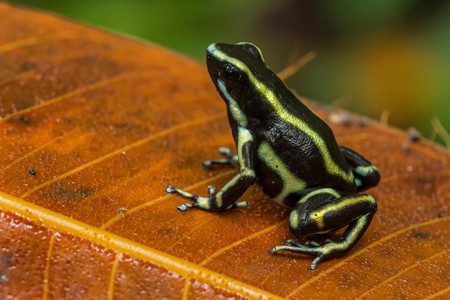 The hike to Pueblito

The park is also home to its very own version of the famous Lost City. Pueblito is the archaeological ruins of a former Tayrona indigenous city, and can be reached via a strenuous hike up into the hills from Cabo San Juan. You’ll clamber over giant boulders and work up quite a sweat, but it’s well worth it to see the ruins of a city that was built thousands of years ago in the jungle. There’s even a small village of the local Kogi indigenous people still on the site, so you have the chance to learn something about modern indigenous cultures as well. 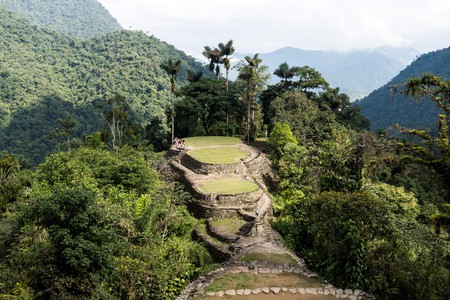 If you travel to Tayrona with a slightly bigger budget than the average backpacker, then you won’t want to miss the chance to stay overnight in the famous Ecohabs. These beautiful thatched huts on the jungle slopes overlooking the sparkling Caribbean below are pricey, but staying there is an unforgettable experience. 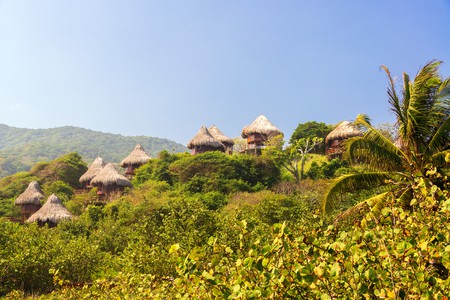 Colombia has more species of birds than anywhere else on Earth, and Tayrona is a great place to observe some of the most beautiful – and rarest – in the wild. From the charismatic keel-billed toucans and lance-tailed manakins, to the shy and difficult-to-observe blue-knobbed curassow, Tayrona is a bird watching enthusiast’s dream destination. 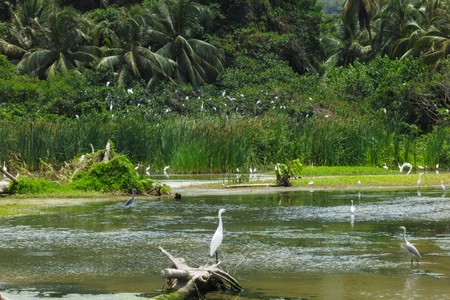 There are actually jaguars

Although the chances of actually seeing one are extremely slim, there are still jaguars at large within Tayrona National Park, which is a pretty remarkable thing to remember when you go to sleep in your tent. Every now and again someone finds footprints along the trails and, very occasionally, some people even get really lucky and see one for themselves.

The famous basilisk lizard – known as the Jesus Christ lizard for its uncanny ability to run on water – is also a resident of Tayrona National Park. Look out for the amazing creatures when you’re near freshwater streams and pools: they have a distinctive, crested head, and will skitter off across the surface of the water if you get too near.

And there’s crocodiles as well

Just in case your attention wasn’t piqued enough by the prospect of jaguars or lizards, there are also some pretty big caiman living in the rivers and bays surrounding the park. Again, the chances of seeing one are rare, but occasionally they come closer to the beaches and you could get some pretty unique footage as well.

Plus there are monkeys everywhere

On the cuter spectrum of Tayrona animals are the three different species of monkeys that reside within the park: howler monkeys – which you’ll definitely hear as they bellow from the jungle at dusk and dawn – capuchins, which can be a bit more shy but can often be seen on the quieter jungle trails, and the endemic cotton-top tamarin monkeys, with their unusual white mohawks. Tayrona may well be the best place in Colombia to see wild monkeys. 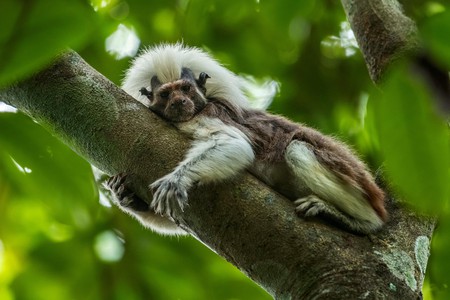 Spot one of the area’s three resident species of monkeys, like the cotton-top tamarin | © Minden Pictures / Alamy Stock Photo

No matter what type of images you like shooting – nature, landscapes, culture, people, sunsets – you will undoubtedly be satisfied during a visit to Tayrona. Whether it be stalking monkeys through the jungle and chasing that perfect wildlife image, or sitting atop a giant boulder and waiting for a stunning Caribbean sunset, photography opportunities are aplenty.

You can even scuba dive

The waters around Tayrona are teeming with coral reefs and colorful fish of all shapes and sizes. You can organize a dive around Tayrona National Park in nearby Taganga or Santa Marta, from where you’ll take a boat out to the wildlife-rich waters and plunge beneath the surface to enjoy all the natural wonders of the aquatic part of the National Park. 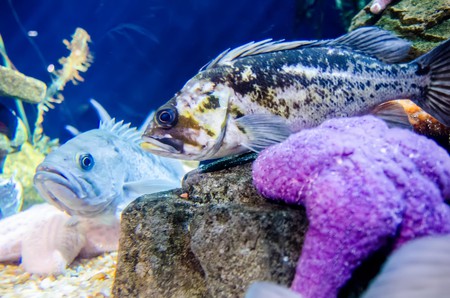