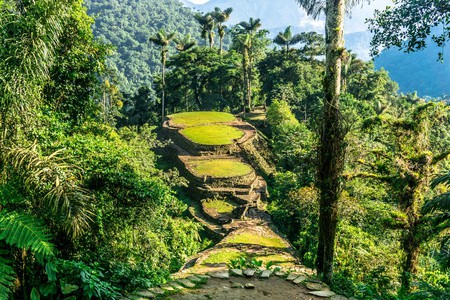 The Lost City Trek has become a must-do experience for backpackers in Colombia, who love to undertake the 4 or 5-day trek through the jungles of the Sierra Nevada de Santa Marta to reach the ancient ruins of the Tayrona city known as Ciudad Perdida. It’s a unique and amazing experience, so here are 15 reasons why you should experience the Lost City trek once in your lifetime.

The chance to experience a wonder of South America

The Lost City is a true archaeological marvel of the continent, and one of the most prominent and important historical sites in Colombia. It’s also absolutely stunning – a series of rounded stone platforms deep in the coastal jungle – and the only way to get there is to undertake the trek. There’s no train or tour-bus option: you have to walk! 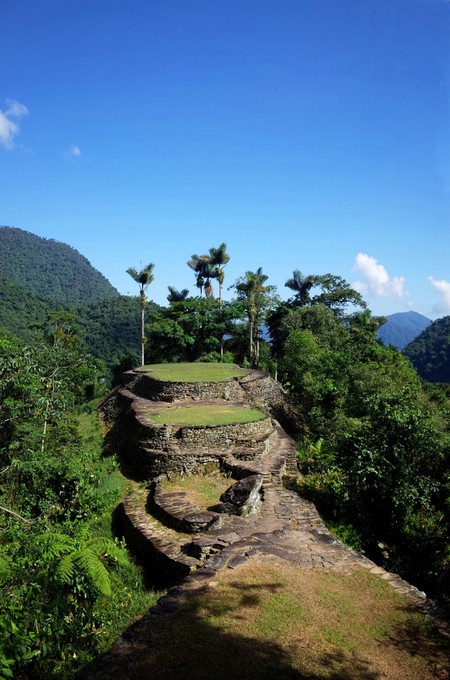 The Sierra Nevada de Santa Marta is full of stunning and unique wildlife – from gorgeous birds like parrots and toucans to monkeys, wild orchids, and thousands of types of trees, you’ll be trekking for days through some of the most biodiverse jungles on planet Earth.

You will be trekking through a biological marvel

Speaking of biodiversity, National Geographic recently named the Sierra Nevada de Santa as one of the world’s most irreplaceable ecosystems, due to its incredible levels 0f endemism and the sheer number of unique species. This is no simple jungle trek – you will be hiking through an ecosystem that is one of the most important to the health of the planet. 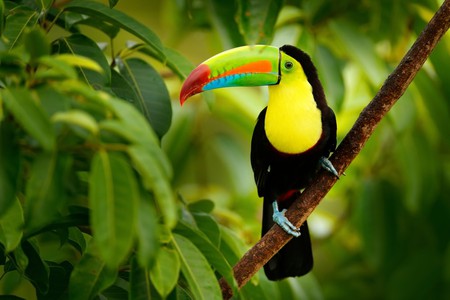 You can learn all about Indigenous cultures

The Sierra Nevada is home to four Indigenous peoples – the Wiwa, Kogui, Arhuaco, and Kankuamo – who all consider the mountains, as well as the ruins of the city, to be sacred. If you trek with the tour operator Wiwa Tours, your guides will be local Indigenous people, and you can take the opportunity to learn all about their unique culture and traditions firsthand. 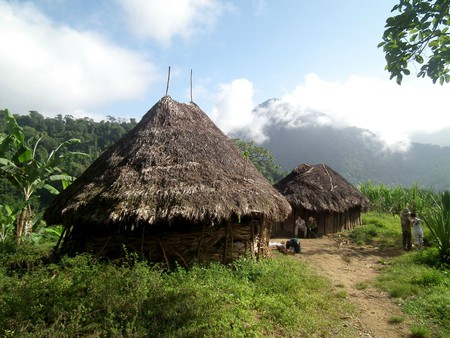 It’s a fraction of the price of similar treks

If you want to trek the Inca Trail then it will set you back north of US$600. In contrast, trekking to the Lost City (the cost for 4 or 5-days is the same) currently costs the equivalent of around US$220. Now we’re not saying that the two sites are the same or anything, but you couldn’t ask for better value for a multi-day trek through stunning jungle to an archaeological wonder of the world.

Over the course of four days on the Lost City trek, you will wade across waist-high rivers, climb up mossy steps hidden in the depths of the rainforest, and generally have an all-around adventurous time! While it’s not exactly roughing-it (there’s still someone to cook the food after all), it’s still a real adventure of a trek. 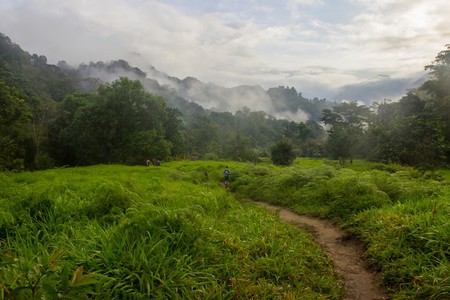 Hiking Tour to the Lost City in Colombia | @ picture4you/Shutterstock

To take this classic photo…

This one doesn’t really need any words… 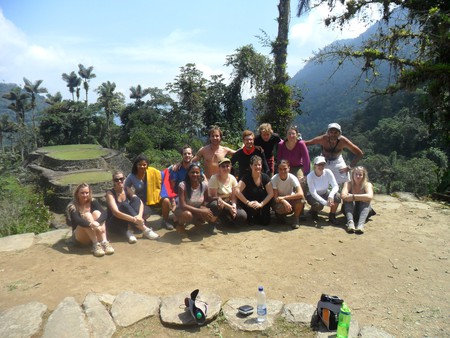 There’s nothing easy about the Lost City trek – the distance is considerable, the climbs long and sweaty, the river crossings tough and intense, and the climate can be unforgiving. That’s not to say it isn’t amazing fun, but there’s an element of challenge there that adds to the experience.

The chance to swim in these rivers

The rivers of the Sierra Nevada are truly stunning: crystal clear, warmed by the midday sun, and surrounded by lush jungle. And the good news is that you can swim in them most days right next to your campsites. Not a bad spot for a jungle shower! 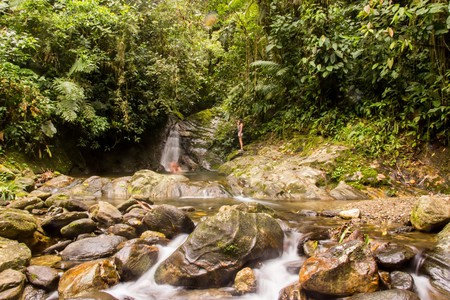 Hiking Tour to the Lost City in Colombia | @ picture4you/Shutterstock

It’s the best exercise you’ll get on your travels!

Travel can actually be quite a physically unhealthy experience if you’re not careful: it’s all too easy to slip into a diet of fast-food hostel burgers and beers on the beach, punctuated by the ‘exercise’ of a free walking tour every now and again. However, the Lost City trek is a true endurance test, and the perfect way to get some much-needed travel exercise.

You hardly have to carry a thing

The beauty of trekking the Lost City is that you basically only need to carry a small day-pack during the entire trek, freeing you up to enjoy the walk. The climate is basically hot and warm, so you only really need one set of clothes for the day, and something a little warmer to sleep in. Throw in a camera and a swimsuit and you’re basically packed! 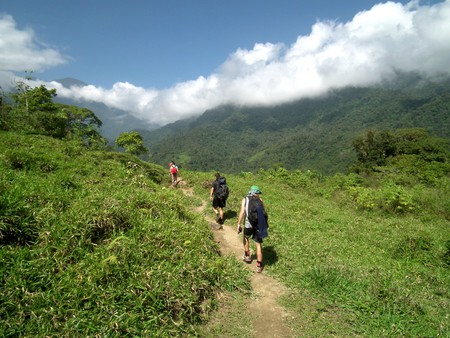 Now is the time to do the Lost City trek

Actually, perhaps the time to do the Lost City trek was 5 or 6 years ago, but there’s no point in looking back – with tourism in Colombia growing by the month, the trek is more and more in demand with travellers, meaning it’s getting busier. So take the chance sooner rather than later to enjoy it at it’s best.

You will climb 1000 ancient steps through the jungle…

If you fancy coming over all Indiana Jones, then there’s no better moment than climbing the 1000 narrow slippery steps from the banks of the Buritaca River up a jungle-clad mountain to reach the city. It’s like a hidden portal to the past, and easily one of the coolest moments of the trip. 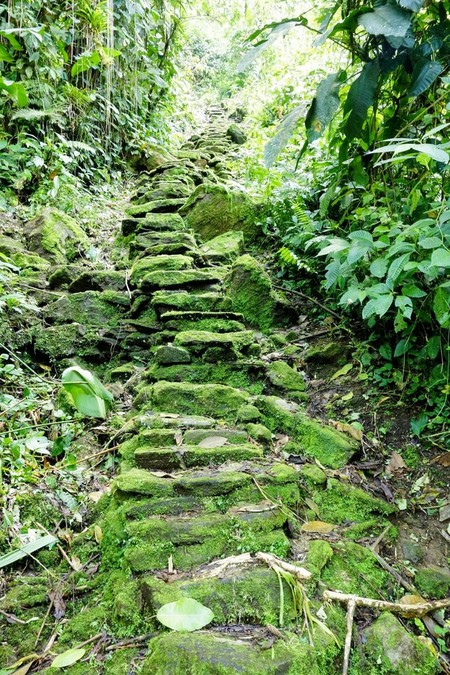 As mentioned earlier, one of the adventure highlights of the trek is fording the wild rivers of the mountains multiple times during the trek. When the rivers are lower you will wade across them, and during the height of the wet season you will get across on pulley systems over the water. Either way, it’s a great story to tell!

Maybe the best reason of all is that when you’re done, and your legs can take no more, gorgeous beaches are less than half an hour from where you finish, so you can rest up from the trek in paradise!