Colombian Destinations That Every Narcos Fan Must Visit 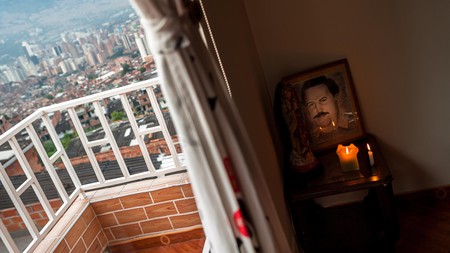 Season one of Narcos, the hit series from Netflix, centers on the criminal exploits of Pablo Escobar and his drug-running associates as they try to outrun and outgun the agents of the US Drug Enforcement Administration. Its portrayal of life and death in 1980s Colombia has led to interest in where the series was shot. We have rounded up the top locations that Narcos fans will want to see in Colombia. 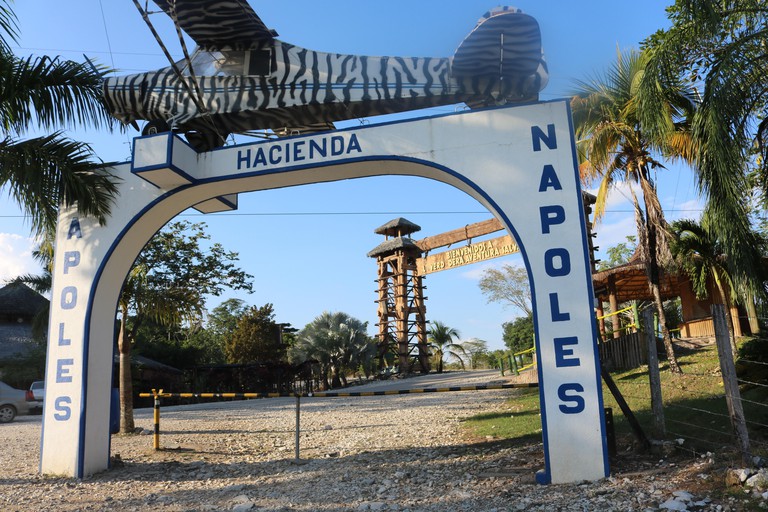 © dpa picture alliance / Alamy Stock Photo
This vast country estate served as the headquarters of the Medellín cartel. It was Escobar’s personal project and at its height had a private zoo, go-kart track, an airstrip and a collection of rare and expensive cars. Little remains from that time but it is now open to the public as a theme park. Of course Escobar is not the “theme” — but you will find his concrete dinosaurs, empty bullring and herd of disgruntled hippopotami. 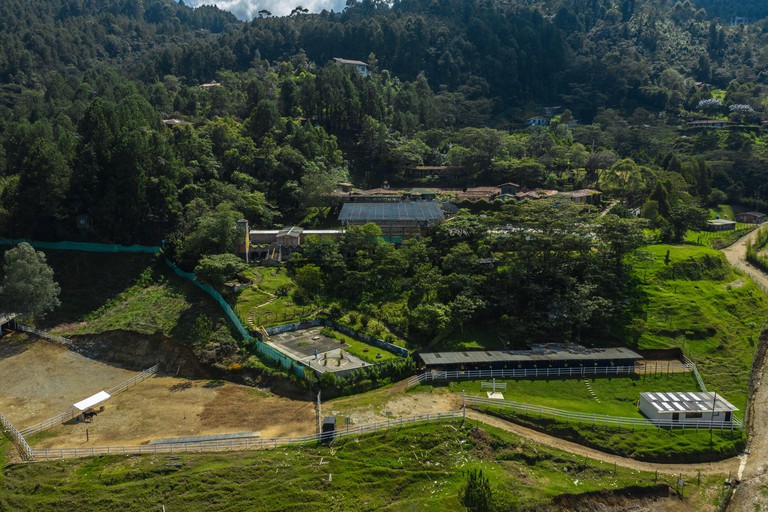 © Roman Diachkin / Alamy Stock Photo
Known as Hotel Escobar or Club Medellín, La Catedral was the prison that Escobar had built for his incarceration following a deal with the Colombian government, which saved him from extradition to the US. In Narcos it is recreated with all of Escobar’s absurd amenities: a football pitch, a bar and a waterfall — but none of that remains today. In 2007, Benedictine monks inherited the shell of the building. They turned it into a place of sanctuary and a memorial to those killed in the drug wars. 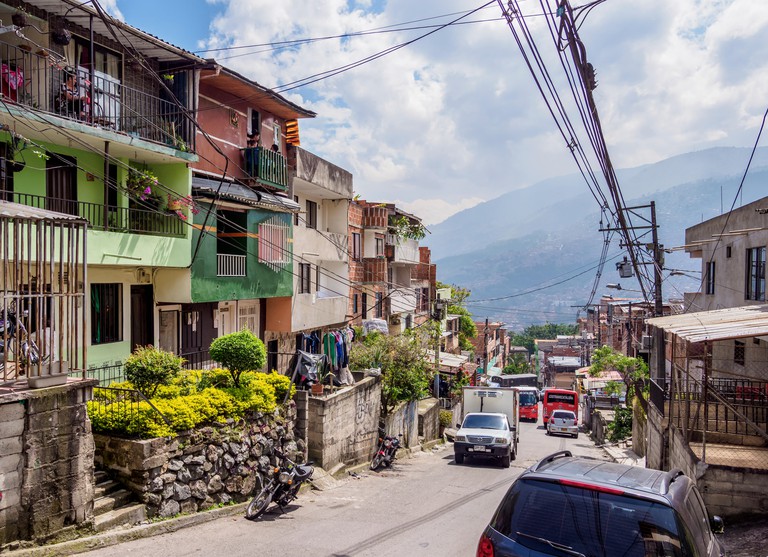 © robertharding / Alamy Stock Photo
The city was the centre of the drug wars and it provided many of the locations for Narcos. Barrio Pablo Escobar is a housing estate built by the drug lord to ensure the loyalty of Medellín civilians and there are several glimpses of it in Narcos. Bolivar Park, in the center of Medellín, is where, in the show, Escobar sits on a bench to eat an ice cream moments before DEA agents swoop. With Culture Trip, you can enjoy a guided walking tour of Medellín with a local insider as part of our specially curated eight-day Colombian Andes trip. 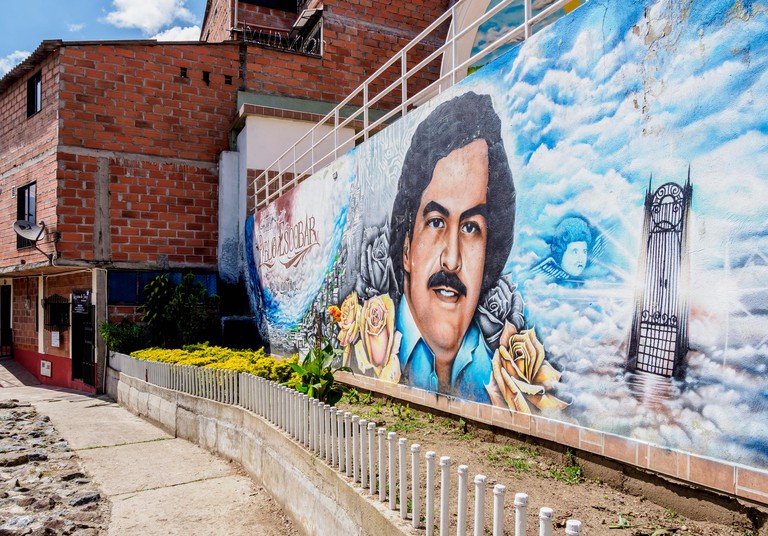 © imageBROKER / Alamy Stock Photo
This Medellín neighborhood, in which Escobar invested money as a way to encourage locals to stay loyal, is one of the few places where he is still admired, and his face is on murals in the area. Although most of the locations for Narcos are elsewhere, there are a couple of spots that eagle-eyed viewers will recognise. 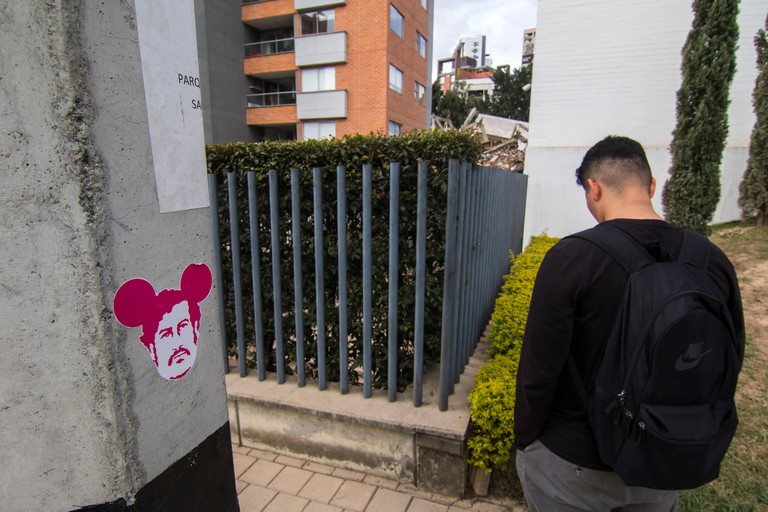 © dpa picture alliance / Alamy Stock Photo
The Monaco Building was bombed by the rival Cali cartel in 1988 in an attempt to kill Escobar, who used it as a hideout. After years of standing empty, it was demolished in 2019. Today it is no more than a scattering of rubble. It is planned to turn the site into a park in memory of those killed during Escobar’s bloody reign.

The rooftop in Lorena, Medellín 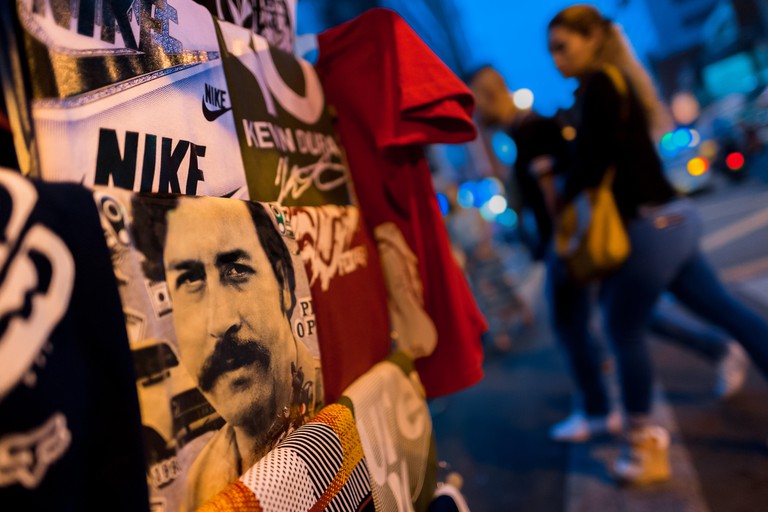 © Jan Sochor / Alamy Stock Photo
Lorena is the area in which the DEA killed Escobar as he tried to flee over the rooftops. Netflix filmed the death scene just two doors from the actual site, which has since been built over. Narcos tours pass through this neighborhood but keep a low profile. Many locals do not welcome the attention or the association with Escobar. 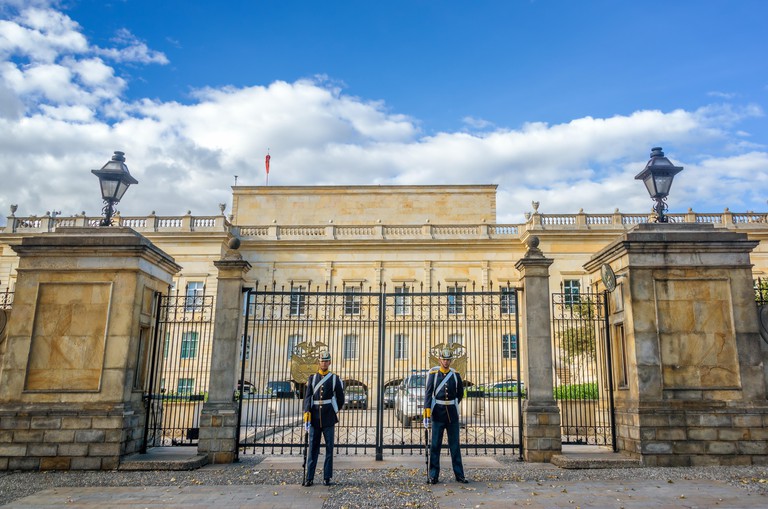 © Jesse Kraft / Alamy Stock Photo
The Colombian presidential palace in the center of Bogotá features extensively in the show, most notably when President César Gaviria declares a state of emergency after his government’s failure to stop narco-terrorism. Remarkably Netflix won permission to film inside the complex. It is not open to tourists but you can always stand on the entrance steps to take a selfie. 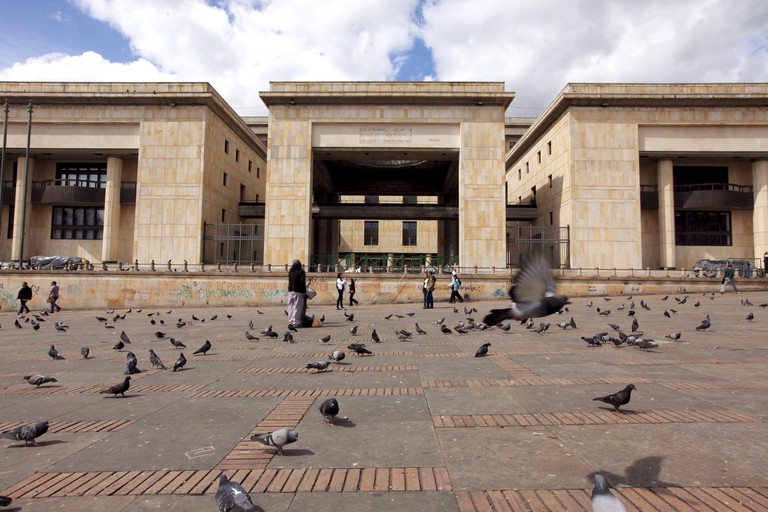 © REUTERS / Alamy Stock Photo
Remember the Narcos episode in which the M-19 guerilla movement raided a government building to try to destroy evidence against Escobar? That was the Palace of Justice in central Bogotá, which was destroyed and then rebuilt. The attack was one of the bloodiest in Colombian history, with 98 people killed. While you can visit the building, people will frown on any act seen to glorify the horrendous events. 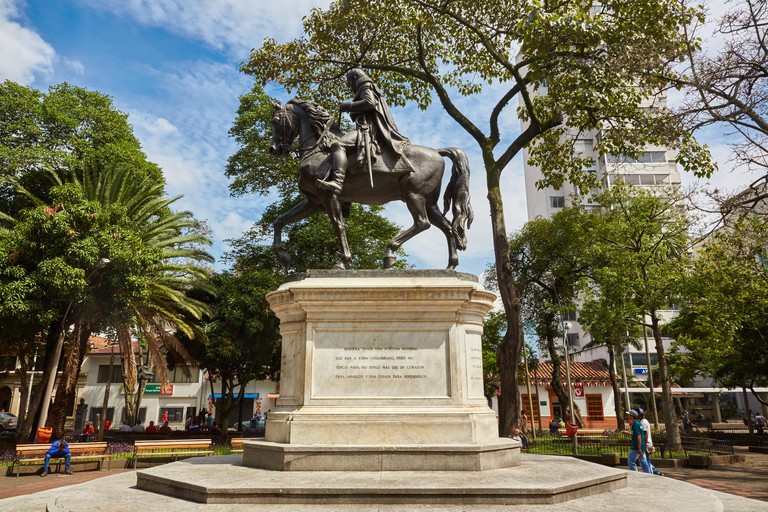 © agefotostock / Alamy Stock Photo
This is the setting of one of the most poignant scenes in Narcos — the moment when Escobar realizes the game is up. We see him wandering in this city-center park, taking in the bustle of life around him. Hours later he was shot dead. 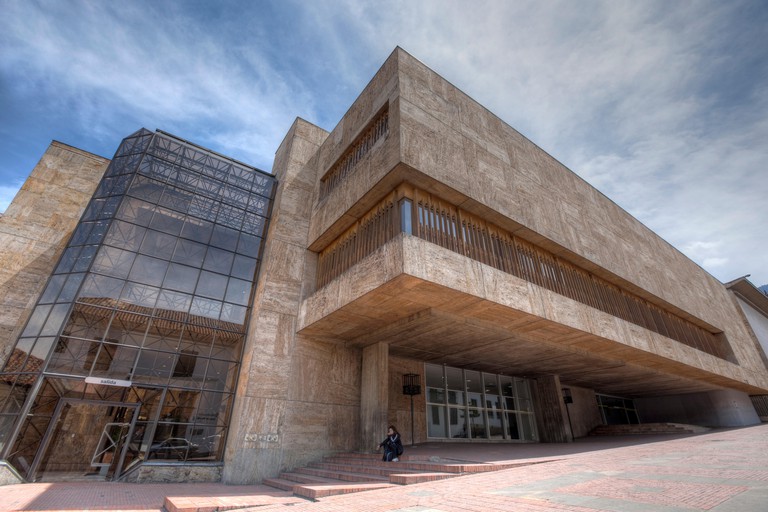 © Luis Angel Arango Library, Colombia, Bogota
La Candelaria is Bogotá’s art deco-styled historical center. It made several appearances in the show, including when Javier Peña, a DEA agent, meets Colonel Horacio Carrillo, and when Marta Ochoa is kidnapped by M-19 guerillas. It is also interesting in its own right. You have to see the Luis Ángel Arango Library, the most-visited library in Latin America, which has more than 1m books. The Botero museum has works by Picasso and Monet too. A walking tour of La Candelaria, with a focus on its eclectic variety of street art, is included on Culture Trip’s exclusive small-group Colombian Andes adventure. 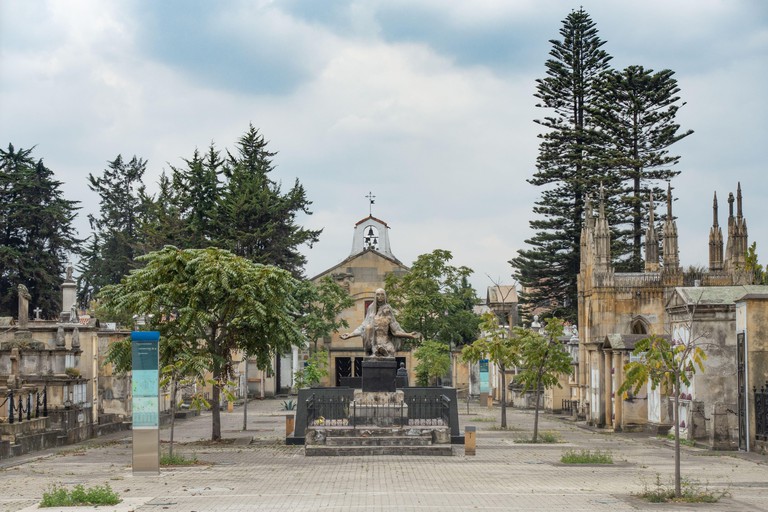 © matthieu cattin / Alamy Stock Photo
Cementerio Central in Bogotá features briefly in the re-enactment of the funeral of Luis Carlos Galán, who is buried here along with dozens of previous presidents and other notable Colombians. If famous graves are your thing, you will want to see Escobar’s memorial too. If you visit the Cemetario Jardines Montesacro in Medellin, be sensitive: some tourists have found themselves in trouble. 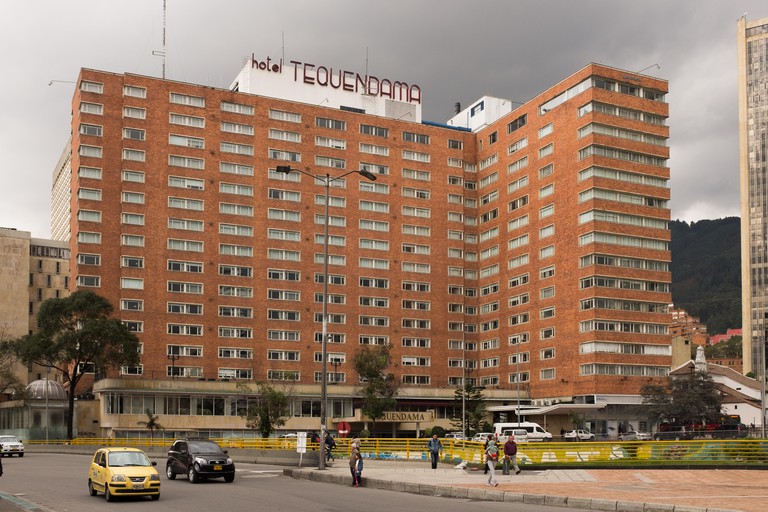 © Andres Felipe Carulla / Alamy Stock Photo
This iconic hotel in central Bogotá is where Escobar’s family spent time in protective custody as they waited for him to turn himself in. The Tequendama still operates today, albeit after several refurbishments. The staff are unlikely to know, let alone tell you, which suite the Escobars stayed in — so don’t ask. 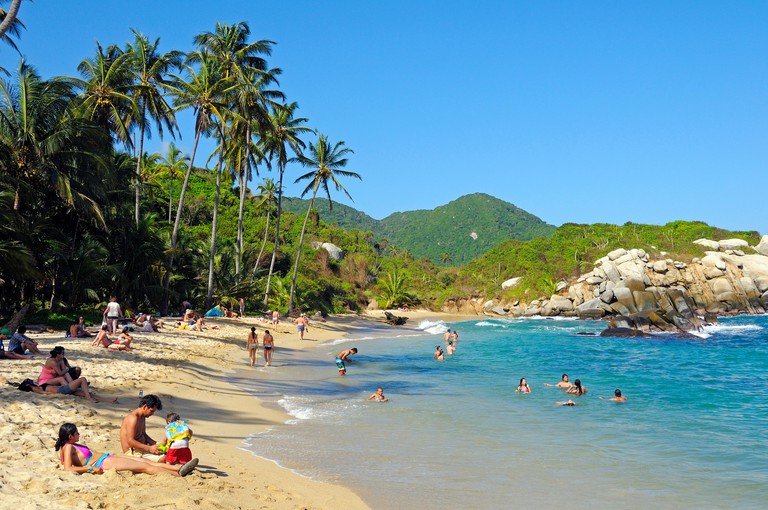 © imageBROKER / Alamy Stock Photo
All those stunning shots of pristine beaches? Those were filmed in and around Santa Marta, a colonial city that is one of the premier resorts in Colombia. This idyllic coast was a major route for the narcotic gangs in their speedboats but is now far more tranquil. Scuba diving, hiking and kayaking are the order of the day. 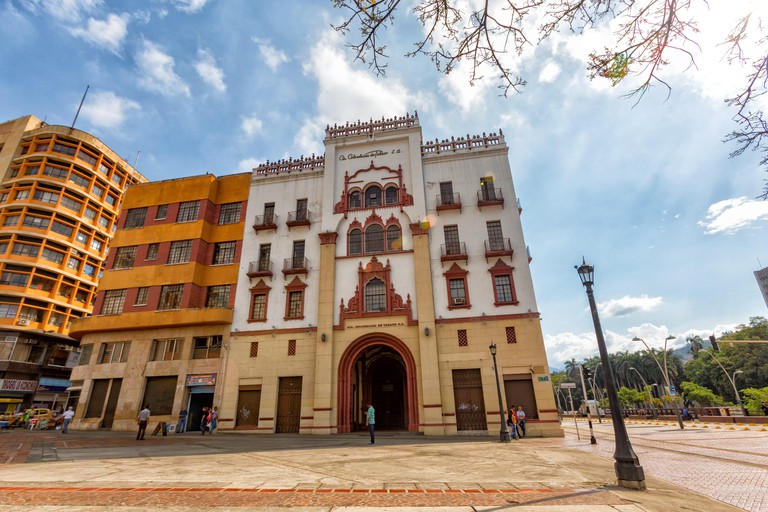 © danaan andrew / Alamy Stock Photo
If you have watched Narcos in its entirety you will know the Cali cartel swoops in to take over Escobar’s business, and so most of season three was shot in Calí. One landmark is the picturesque Coltabaco building, which dates to the 1930s. Inside, the period details include bulb chandeliers and the original elevator. 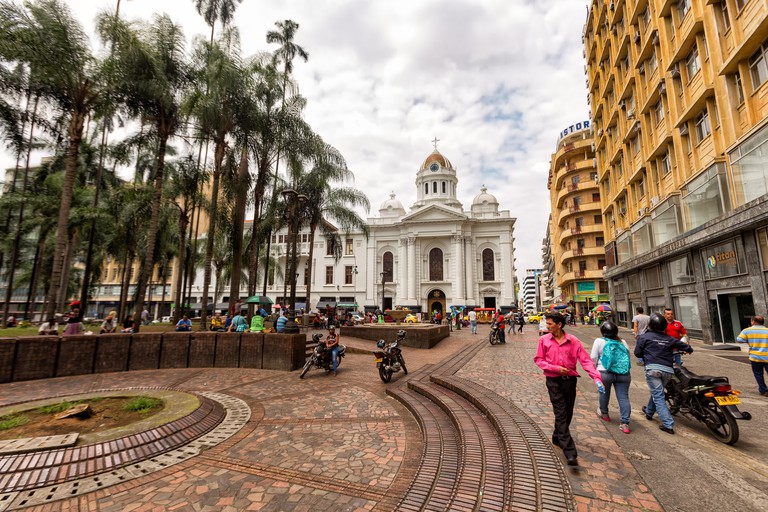 © danaan andrew / Alamy Stock Photo
This city-centre plaza in the historical heart of Calí is famous for the spoke-like design of its paths, beautiful tiles and tall palm trees. Scenes for season three were shot here. Keep an eye out for food vendors if you visit — it is a hub for workers on their lunch breaks.
Give us feedback