Awesome Native Animals From Colombia You Need to Know 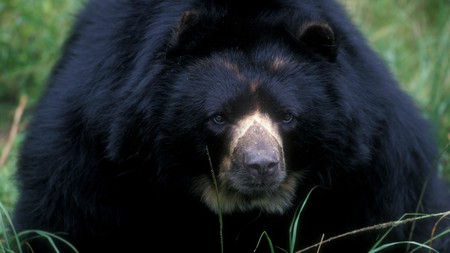 Colombia is the second most biodiverse country on the planet and is #1 in biodiversity per square mile. This South American nation has truly remarkable wildlife that dedicated naturalists seek out and enjoy observing. Here are some of the most amazing animal species you’ll spot on a trip to Colombia.

The Amazon river dolphin is more commonly known as the pink river dolphin, on account of the vivid pink coloration that many take on as they get older and their skin endures more abrasions. With their strange long noses and rounded heads, as well as their shy nature, these dolphins are far from any Flipper clichés and are an amazingly beautiful addition to any visit to the Colombian Amazon. They can be seen throughout the Amazonia and Orinoquia regions of Colombia, making a trip to see – and swim with – pink river dolphins an essential part of any tour in the region.

These crazy-looking little monkeys are endemic to Colombia, meaning that they can only be seen in this country in the whole world. They are extremely rare, but luckily for wildlife enthusiasts, a small population was introduced to the Tayrona National Park in a successful attempt to preserve the species. With their curious nature and tuft of bright-white fur, cotton-top tamarins are a memorable part of a visit to Tayrona and are – gratifyingly – relatively easy to spot on the forest trails of the park at dawn and dusk. 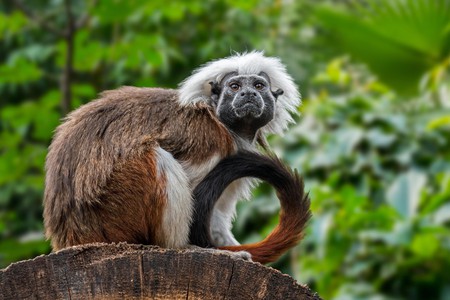 These mighty creatures are the largest species of crocodile and predator in the Americas. They are also critically endangered, having been mercilessly hunted for their skins in the 19th and 20th centuries. Seeing an Orinoco crocodile in the wild is extremely unlikely and only really possible in the isolated Tuparro National Park on the Venezuelan border. However, luckily for all budding herpetologists, there is a thriving Orinoco crocodile breeding and reintroduction program at Wisirare Park in the eastern plains of the Casanare department – where visitors can get up close and personal with some of these 17ft (5.18m) giants.

With over 1,600 known species, Colombia is one of the most butterfly-diverse countries in the world – and any hike through the jungles and forests of the country will yield sightings of myriad species of brightly colored insects. The weirdest and most wonderful though is the Diaethria Phlogea, a native species also known as the 89’98 butterfly due to the distinct number patterns on its outer wings.

The third largest feline species after the lion and tiger – and the largest in the Americas – the jaguar is one of the most iconic natural symbols of Colombia. They are threatened and extremely hard to observe in the wild on account of their nocturnal habits and shyness, but they are also surprisingly widespread in Colombia – even occurring in popular tourist spots like Tayrona National Park, which you can visit as part of Culture Trip’s epic eight-day Colombian Caribbean adventure, led by our Local Insider. The best place to seek out a jaguar is La Aurora Ecolodge in the plains of Casanare, where guests can join late-night drives to inspect camera traps set up to monitor jaguar populations.

The capybara – known in Colombia as the chigüiro – is the largest rodent species in the world. Although they are not unique to Colombia – occurring in all South American countries except Chile – seeing wild capybaras is an unmissable experience for wildlife enthusiasts visiting Colombia. They are widespread in the Eastern plains of Colombia – where they are also considered a real delicacy – and especially easy to see in the dry season when vast family groups of up to 100 individuals gather around watering holes. 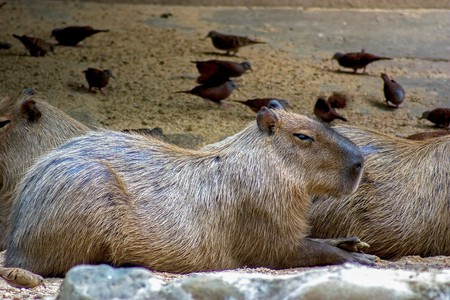 A capybara rests on the ground near the Andean mountains in Colombia, South America | © Mauricio Acosta / Alamy Stock Photo

With the largest number of amphibian species on earth, Colombia is probably the best place on earth to see wild frogs. But these aren’t just any frogs – Colombia is home to some of the most colorful and poisonous frogs on the planet. Known colloquially as poison dart frogs or arrow frogs – due to indigenous peoples once using their venom as a weapon during hunting – there are many different species unique to Colombia. The most spectacular species is the bright yellow golden poison frog:the most venomous vertebrate in the world and endemic to the Pacific coast of Colombia.

Also known as the Andean bear, this is the last remaining species of short-faced bear – and is an extremely rare inhabitant of high-altitude moors and forests. The only surviving species of bear native to South America, it’s extremely hard to spot a spectacled bear in the wild, but the best place to do so is the vast moorlands of Chingaza National Park, just outside Bogotá. They are still highly threatened by poaching and habitat destruction but are considered one of Colombia’s most important native species.

The majestic Andean condor is the largest flying bird in the world by combined measurement of weight and wingspan – and is the national bird of Colombia – in spite of the fact that fewer than 100 remain in the wild here. There is nothing quite like seeing an adult Andean condor in flight, soaring above the mighty peaks of the Andes and the best places to observe these magnificent birds in the wild in Colombia are the Cocora Valley, Puracé National Park and the Sierra Nevada de Santa Marta. You may be fortunate enough to spot one on Culture Trip’s exclusive small-group Colombian Andes tour, which takes takes you on an epic road trip across the mountains from Bogotá to Medellín.

Probably the most surreal native species in Colombia, the giant anteater is like something from a children’s cartoon show, with its strange long nose and giant bushy tail. Found roaming the wide-open plains of Colombia’s eastern departments, these anteaters – also known locally as ant bears – can measure up to 7ft (2.13 m) in length, and weigh almost 100lbs (45kg). They feed primarily on termites and ants, using their massive claws and long, sticky tongues to eat thousands of insects every day. 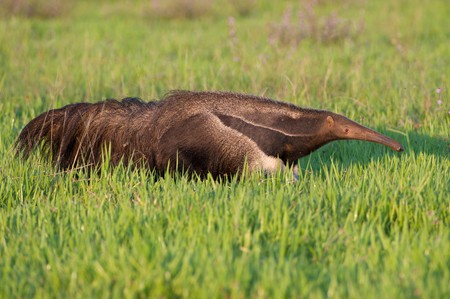 Colombians like to say that, “all humpback whales are born in Colombia” and while this isn’t strictly true, the Pacific coast of the country is one of the most important breeding and calving grounds of the mighty cetaceans on the planet. The humpbacks arrive in the region in large numbers in June and stay until around October, taking advantage of the lack of predators in the warm tropical waters to give birth and teach their young calves. They are easily seen in these months from small boats departing from small towns in the sparsely populated Chocó department – Nuqui and Bahia Solano are the best spots to visit.