Traditional Foods You Have to Try in Colombia 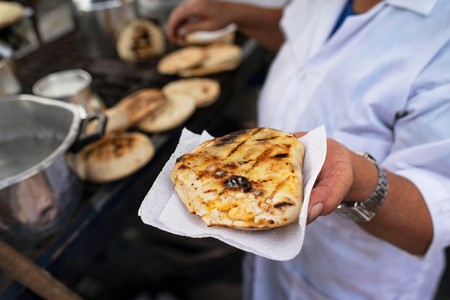 While Colombia may not be well known around the world for its cuisine, the country is home to plenty of delicious traditional foods. Each region of Colombia has its own individual dishes and unique takes on the country’s typical cuisine. Here, we consider some traditional Colombian dishes from specific regions around the country.

Bandeja Paisa is a traditional meal from the Antioquia region of Colombia, which includes the cities of Medellin, Santa Fe de Antioquia, Guatape and Jardin. In fact, it is so well-loved that it has been adopted as Colombia’s national dish. This hearty meal usually contains white rice, red beans, ground or minced beef, plantain, chorizo sausage, corn, pork crackling, fried egg, an arepa and usually half an avocado. The ingredients can vary between cities and restaurants, with certain ingredients being added or taken away. 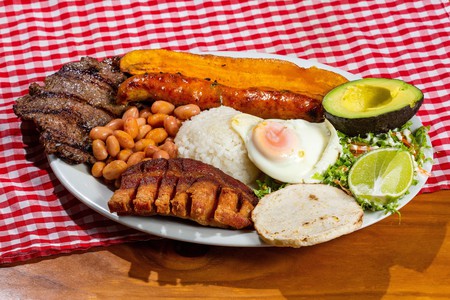 Lechona is a mixture of chickpeas, pork meat, spices and occasionally rice (depending on the area) which is often served with an arepa. Traditionally this mixture of ingredients is slow-cooked for up to 10 hours inside a whole pig. While Lechona can be found in restaurants all over Colombia, it originates from the Tolima region, which is south-west of Bogotá and contains cities like Ibagué and Espinal.

Originally from the Bogotá and Andes Mountains region of Colombia but more recently found all over the country, this traditional soup is ideal for the cooler mountainous locations. This dish is a white soup made with chicken, a variety of two or three kinds of potato, corn, sour cream and usually white rice and avocado. 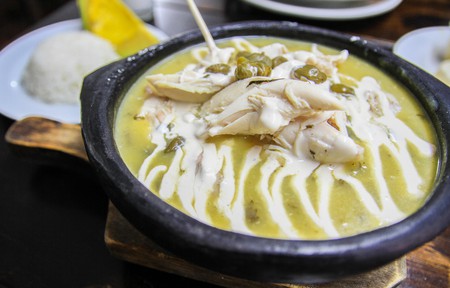 Sancocho stems from the traditional Spanish stew and is popular all over South America. Each country has a unique take on the dish and Colombia is no different. Here, the version varies between fish on the coast and different kinds of meat in other regions. It always contains yuca, corn, potatoes and plantain and is usually served along with white rice. This dish originates from the Valle de Cauca region, home to the cities of Cali, Buenaventura and Tulua.

This breakfast soup originates in the Andes region and provides an ideal start to the day in what tends to be a cooler region. The milk-based soup is made with water, milk, egg, onions and cilantro and is often served with bread and hot chocolate. 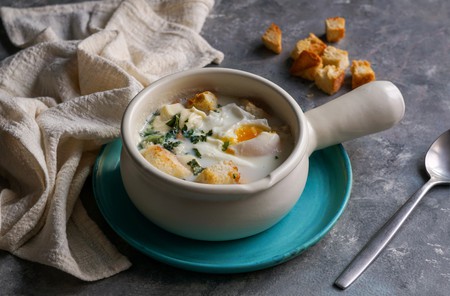 Arepas are the most common traditional dish in Colombia and are served as an accompaniment or a snack. Arepas are served throughout Central and South America, but Colombia has its own original type of arepa. Arepas can come in a number of varieties, including arepas de choco (made from corn and filled with cheese), arepas con queso (filled with cheese), and arepas de huevo (an arepa which is deep-fried with an egg cracked inside and then refried). Each region in Colombia has its own traditional way to eat and make arepas.

This dish can be found in a variety of forms all over Colombia and each contains slightly different ingredients depending on the region or restaurant. This hearty, meat-filled dish contains a variety of grilled meats (chicken, beef, pork crackling, chorizo sausage) and is usually served with different kinds of potatoes, arepas, plantain and corn. This dish is designed to be shared among family or friends – each having a fork or cocktail stick to dig in. 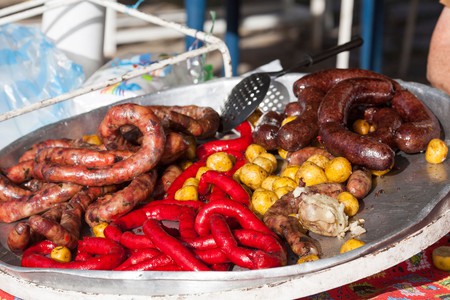 This is a delicacy from the Santander region of Colombia, a region north of Bogotá that is home to the cities of Bucaramanga, Barichara, San Gil and Floridablanca. Hormigas Culonas are a specific, large, leaf-eating species of ant that are traditionally found in this region and are eaten for their flavor. These ants can be served fried or roasted in salt and are either crushed or kept whole. 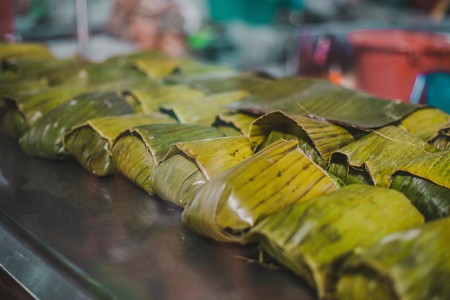 A market stall counter filled with tamales, a traditional Colombian dish made with steamed rice and meat wrapped in a banana or plantain leaf | © Lozzy Squire / Alamy

This Afro-Caribbean-influenced dish is typically found on Colombia’s Caribbean Islands of San Andres and Providencia. This soup is made primarily from a fillet of fish or other seafood along with snails, yams, potatoes, yuca and baked plantains cooked in coconut milk and pepper. Rondón is often served with coconut rice and fried plantain.
Sound tempting? You’ll have the chance to sample authentic Colombian cuisine on Culture Trip’s specially curated eight-day Colombian Andes adventure, while our exclusive eight-day Colombian Caribbean trip includes a guided street food tour of Cartagena – led by our local insider.