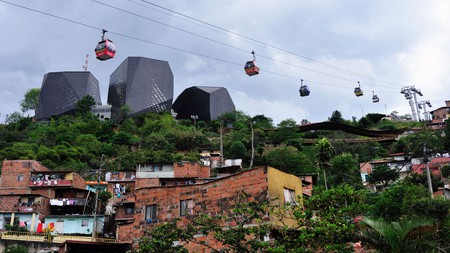 Colombia is now at the forefront of Latin American architectural revelry: political decisions to unify lower class favelas and upper class urban areas, in the cities of Medellín and Bogotá, have been achieved through transportation easement and structural ingenuity. Necessity, education and art continue to intertwine, producing cultural advancement alongside marvelous architecture. Here are ten buildings that are significant to the history of Colombian architecture. 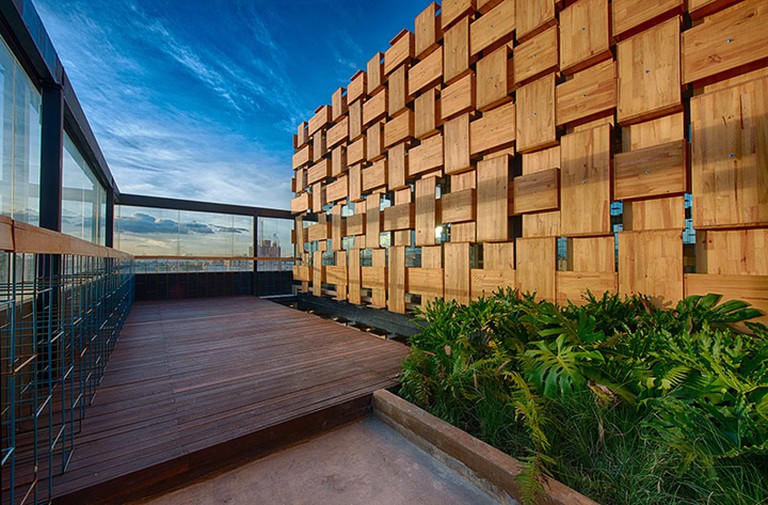 © Retail Design Blog
One of the newest spaces on Bogotá’s Zona Rosa nightlife scene is El Fabuloso, a restaurant/bar designed by MEMA Architects. Located in an area of Bogotá that is full of shops, restaurants and a happening nightlife scene, El Fabuloso sits on the seventh floor in a building on the busy Calle 85. Within this stunning design of wood blocks, guests can enjoy a hip menu of beer and pizza. Offering a spacious bar, a picnic-style atmosphere and a swanky outdoor patio that overlooks the city, El Fabuloso is beautiful in every way. 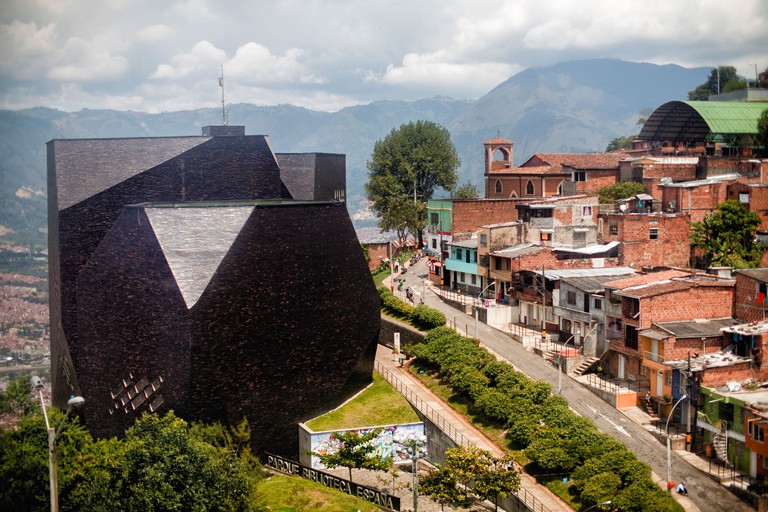 © Alexander Rieser / Alamy
In Medellín’s Barrio Santo Domingo Savio sits Giancarlo Mazzanti’s beacon of hope, La Biblioteca España. Beyond hosting a small collection of books, these towering black boulder structures offer programs, resources and services to the people. With an ultra modern, cubist design, the structure draws attention to a favela that was once shunned from the eyes of urban planners. Accessed by the Metrocable, another famous Medellín attraction, Biblioteca España is covered in a black stone tile endemic to Colombia and smattered with non-symmetrical rectangular windows and small skylights. Mazzanti wanted small windows to disconnect the people from their surroundings and instead transport them to a more enlightened place. 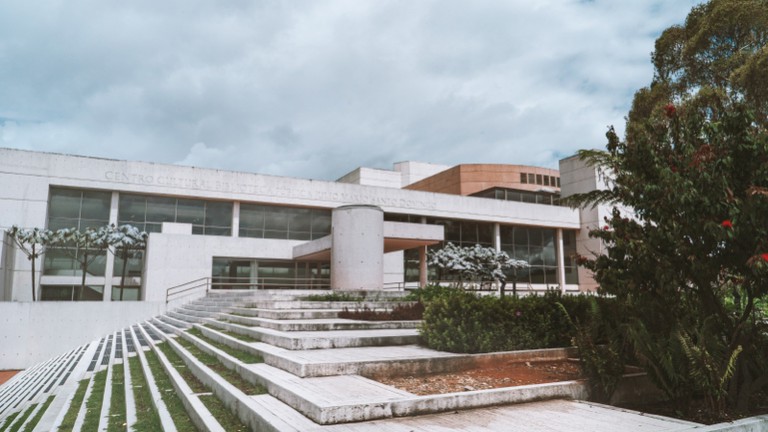 © biblored.gov.co
La Biblioteca Julio Maria Santa Domingo opened in 2010, with an accompanying celebratory performance by the Bogotá Philharmonic Opera. Today, the library is one of the city’s largest, occupying 75,000 square feet and offering over 35,000 books, including audio-visuals and a vast music selection. Designed by architect Daniel Bermudez, the building showcases two theaters, one of which has a capacity of 1,300, and a smaller theater that acts as an illuminated gallery for art and sculptures. Surrounding the library is landscaped greenery and park space, equally as impressive as its interior. Located in an area encompassed by concrete and urban landscape, the library gives educational as well as natural, bio-diverse respite. 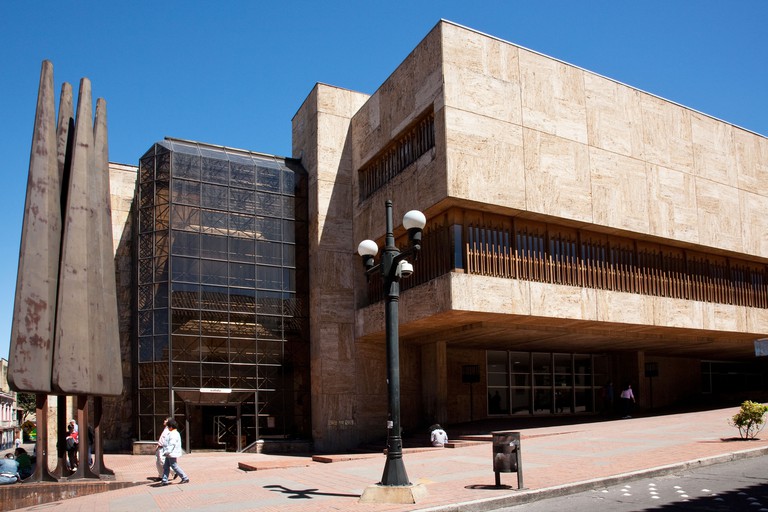 © Jeremy Pembrey / Alamy
La Biblioteca Luis Angel Arango rests in the heart of Bogotá’s historical La Candelaria district – a modern structure among streets of cobblestone, red brick and Spanish colonial architecture. Created by acclaimed architect German Samper, the Luis Angel Library is not just a place for reading books, it is also a cultural icon of the city. Inside, the building guests have access to a concert hall where free performances and events are hosted. Also, a romantic outdoor patio overlooks downtown, making it the perfect place for a coffee and conversation, or a quaint perch for research and writing. 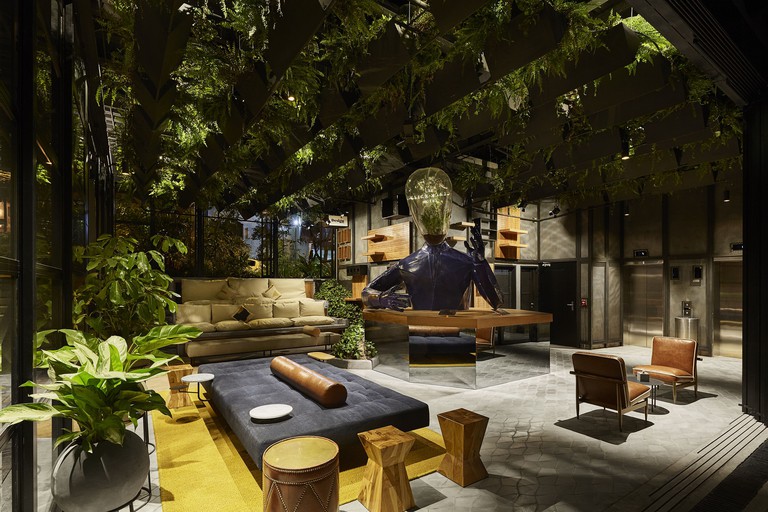 Courtesy of Click Clack Hotel / Expedia
The Click Clack Hotel is one of Bogotá’s newest and trendiest boutique hotels from Plan B Architects, Felipe and Federico Mesa. With a chic and stylish approach, including the rooftop bar Apache, the hotel is doing everything right in terms of attracting a younger, hipper generation. Located on Carrera 11, a main thoroughfare, the hotel is close to shopping outlets and restaurants. Offering live music and DJs, as well as a restaurant and verdant floor-to-ceiling green terrace, the Click Clack Hotel not only functions as a house for accommodation and fun, but also as an acclaimed piece of architectural design. 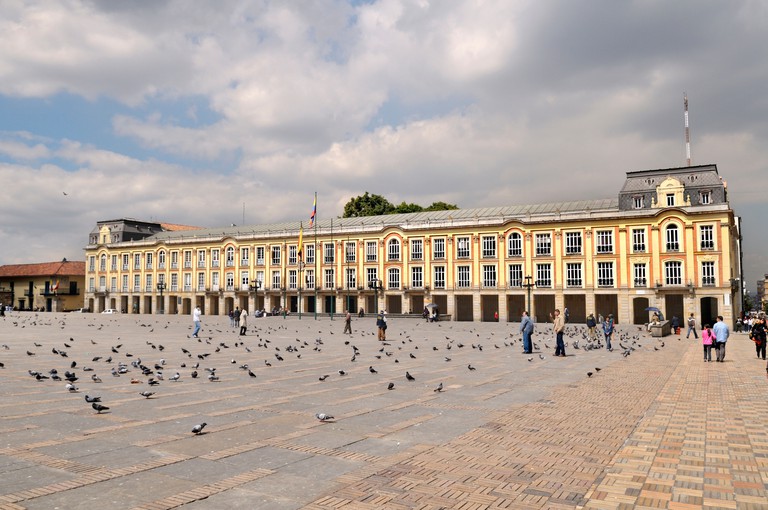 © imageBROKER / Alamy
Brushing against Plaza Bolivar and attached to the Palacio Municipal in Bogotá’s main plaza – where the political parlay and student protests ensue – sits the prominent Alcaldia Mayor de Bogotá. This iconic, historical building was resuscitated by a design from internationally acclaimed architect Manuel A. Guerrero. Keeping the facade in classical form, the building transitions from old to new from exterior to interior. Ample skylights and plexiglass walkways create an airy work environment for the Mayor of Bogotá and his staff. 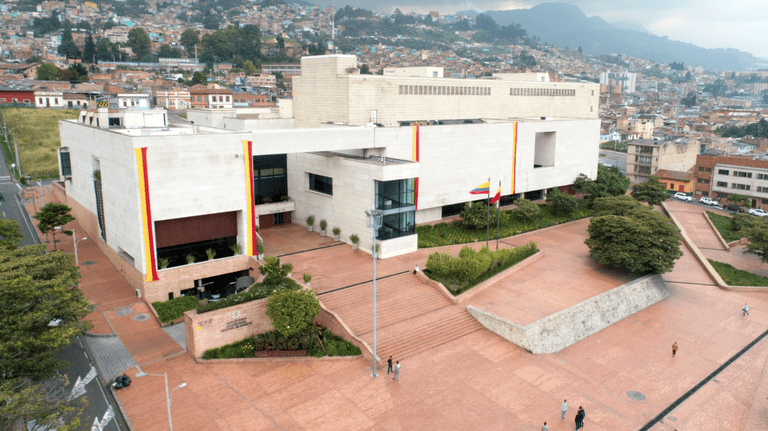 © El Archivo de Bogotá
El Archivo de Bogotá is a safe haven for historical documents from the city of Bogota, some dating back to its inception 465 years ago. The building stands as a function for the preservation of the political, economical and cultural truths about Bogotá, as well as housing a museum. Guided tours are given to the public and social events can also be booked at this location. Located in La Candelaria, El Archivo de Bogotá was designed by architect Juan Pablo Ortiz, who won a design competition that set the pace of his steady architectural career in Colombia. 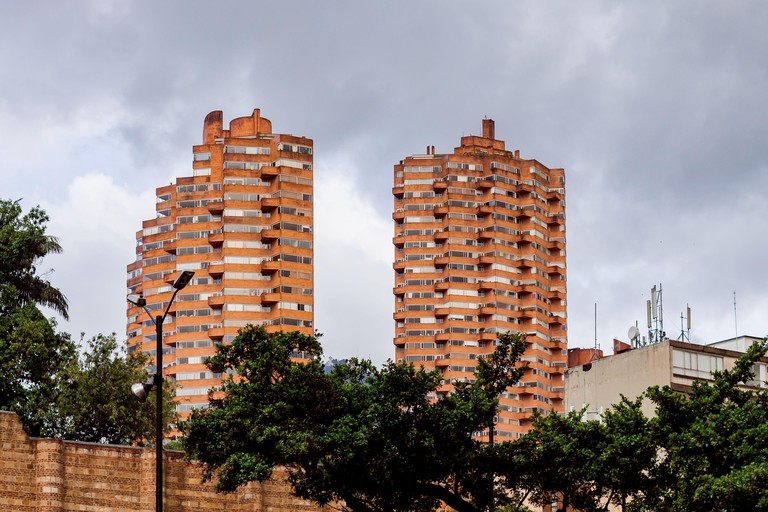 © Gabriel L. Guerrero / Alamy
In Bogotá’s bohemian neighborhood of La Macarena sits one of Rolgelio Salmona’s greatest creations, Las Torres del Parque. The structure consists of three high-rise apartment towers and garden paths that amble through a park leading to a bullring. Nestled between the chaos of this working city and the serene Andes mountain range, Salmona’s 1968 creation achieves harmony with architecture and its environment. Las Torres del Parque is also exemplary of a sense of community, where the concept of residential and public space meet in the aim of being accessible by all – not only the wealthy.

Building, Church, School
Facebook
Email
Twitter
Pinterest
Copy link
Share
Amidst the Los Nogales School buildings, architect Daniel Bonilla placed a stunning modern chapel that is boxy, futuristic and juxtaposed against the other antiquated red brick buildings. La Iglesia del Colegio Nogales is a representation of duality in human nature. From the human mind to the human tradition, the building evokes serenity with an edge. The rectangular prism constructed of ochre concrete and natural wood is mixed with texture and grain, encompassed by the tranquility of its natural surroundings. Inside, the chapel slatted wooden chairs are church pews and the raised sanctuary is dimly lit, giving the building a feeling of mystery and sanctity. 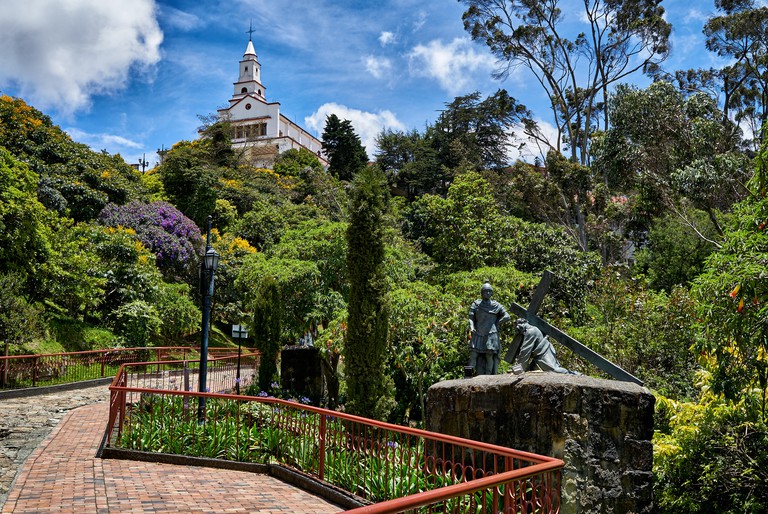 © Juergen Ritterbach / Alamy
From nearly every angle in the city of Bogotá, the eye catches a glimpse of Monserrate – a grandiose mountain donned with a catholic church. The sanctuary atop this mountain – above 9,300 feet – was built in 1657 in honor of the Virgin Morena, whose shrine is actually located in Barcelona. Guests can visit Monserrate daily by ascent in a gondola or cable car and we suggest you stay for dinner or drinks at San Isdro or the Santa Clara House for a spectacular sunset view. Also, don’t be surprised if you see marriage proposal or two, it’s that kind of a magical place.
Give us feedback