10 Beautiful Colombian Birds and Where to Find Them 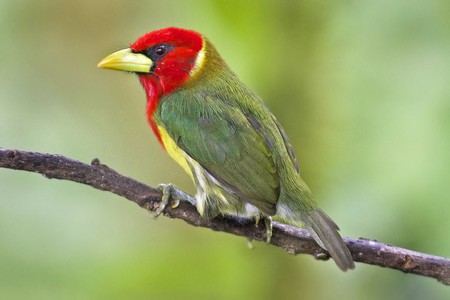 Colombia is the world’s second-most biodiverse country, and it has more species of bird than any other country on Earth, with around 1,930 species. While it would impossible to list – or maybe even see – all of the species that the country boasts, some of them are more beautiful than others. Here are 10 especially beautiful Colombian birds and where to find them.

The Andean cock-of-the-rock is a stunning bright-red bird that lives in Andean cloud forests and foothill jungles. They can be surprisingly elusive and tough to track down for such colourful birds, but the easiest place to see them is at a lek, a place where males gather together to sing and dance and try to attract a mate. The best place to observe these gorgeous birds in Colombia is at the lek site just outside the pretty coffee town of Jardin in Antioquia. 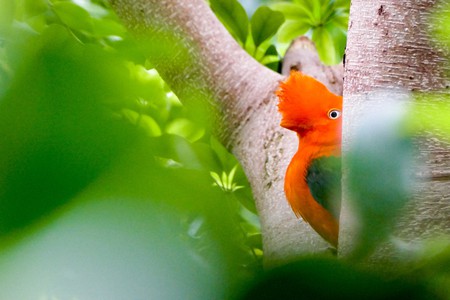 There are about 240 species of tanager in the Americas, and they are a favourite of birders and novices alike on account of their brightly coloured plumage. Choosing Colombia’s most beautiful tanager is a tall order, but the magnificent paradise tanager gives any bird a run for its money in the beauty stakes with its sky-blue belly, almost fluorescent green head and bright-red back. They can be seen quite easily in the Amazon region, especially on the hiking trail to Fin del Mundo waterfall in Mocoa, Putumayo.

Colombia boasts several species of toucan, but none are more bright and colourful than the magnificent keel-billed toucan. These toucans are found around the Caribbean coastal region of the country and are most easily observed in the forests around Minca in the Sierra Nevada de Santa Marta mountains or in Tayrona National Park. If you take a stroll at dusk or dawn, listen out for their loud croaking calls and scan the tops of bare trees for a good chance of a sighting. 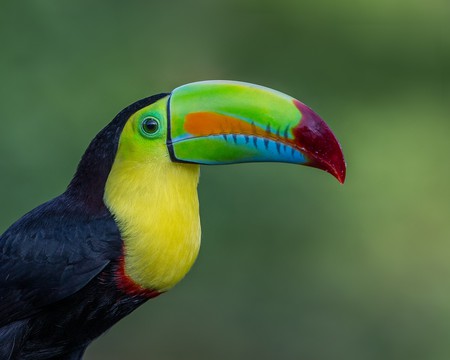 Another one of Colombia’s most gorgeous tanagers, the multicoloured tanager is endemic to Colombia, meaning that it can only be observed in this country. Its name sums up its beauty effectively: the little birds seem to have been covered in almost every colour imaginable! They can be seen quite easily at the bird feeders at Finca Alejandria, just outside the city of Cali.

Closely related to toucans, barbets are medium-sized colourful birds and there are many different species to see in Colombia. The most beautiful by far is the spectacular toucan barbet, a bird so colourful that it’s hard to believe the pictures are real. They are generally quite easy to see, despite their range being restricted to the Pacific slopes of the Western Colombian Andes; the best places to see one are Montezuma Reserve, Las Tangaras Reserve and La Planada Natural Reserve. 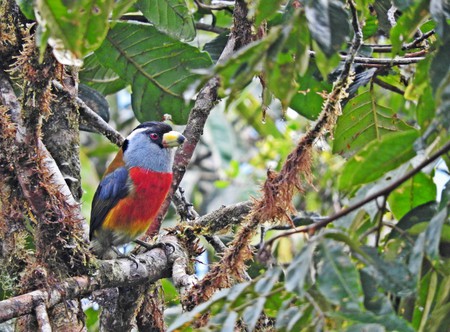 As with the tanager, choosing the most beautiful of Colombia’s 150-plus species of hummingbird is an exceptionally tricky task, but the near-endemic golden-bellied starfrontlet is definitely one of the loveliest Colombian hummingbirds. Its bright golden belly shimmers and glows in the sunlight and it can be seen quite easily at the hummingbird feeders at Chicaque Natural Park just outside Bogotá.

There are four different species of quetzal living in Colombia, and all are as beautiful as each other. Sadly, the iconic resplendent quetzal is limited in range to Central America and cannot be seen in Colombia, but the almost-as-beautiful white-tipped quetzal can be observed in the Sierra Nevada mountains at El Dorado Reserve. 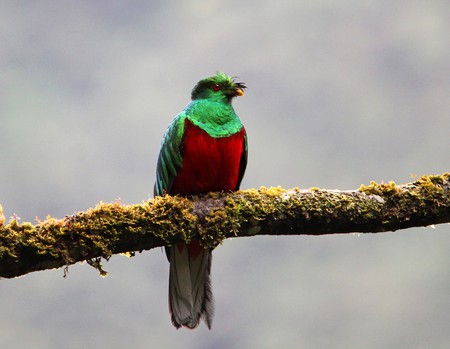 Everybody loves flamingoes, and you can see the comical pink birds quite easily on the Colombian Caribbean coast. There is a large population – which is migratory, so the numbers ebb and flow throughout the year – in the northern coastal deserts of La Guajira, particularly at the aptly named Los Flamencos Natural Park in Camarones.

Colombia’s national bird is sadly endangered in the high Andean ranges of the country, and it isn’t necessarily the most beautiful or graceful species if you see it when it’s perched. However, a condor in flight is surely one of the most beautiful and impressive birds on planet Earth, with a wingspan that can top three meters (10 feet). The best place to enjoy this spectacle is at Purace National Park, near the city of Popayan in southern Colombia. 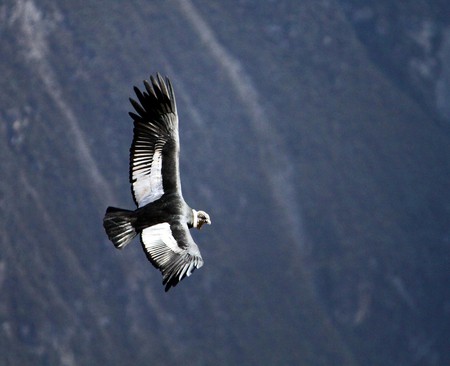 There are a few different species of motmot that can be seen in Colombia, but they are a real highlight of the Colombian Coffee Region, where the Andean motmot is a common sight on coffee farms and even in hostel gardens and town squares. With their bright green and blue plumage and their unique two-feathered tail – which they flick side to side like a grandfather clock – they are also one of Colombia’s prettiest birds. Simply sit on the main square in Salento with a fresh cup of coffee to see these beauties.