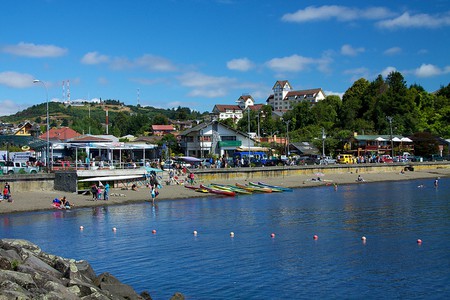 What do Germany and Chile have in common? Puerto Varas, in southern Chile. Both cultures are woven into the fabric of this lakeside town – from architecture to cuisine, the Germanic influence is clear to see. Here’s everything you need to know.

Located in the Lakes Region, Puerto Varas is surrounded by lush land and Valdivian rainforests. Beside the town rests Lake Llanquihue, the second largest lake in Chile, covering 877 square km (545 square miles). The lake is the largest attraction in Puerto Varas and for good reason – the view of Volcan Osorno towering over the lake is incredible. Just 30 minutes northeast of El Tepual Airport in Puerto Montt, Puerto Varas is convenient and a great first stop on a trip to Patagonia.

The influence of Germanic colonization in the mid-1800s is evident in the town’s architecture, cuisine and tourism. From Captain Haase, a tour boat modeled after those used in the colonization effort, the schools Colegió Alemán and Instituo Alemán, kuchen and Kunstmann beer, to The Cóndor newspaper, a German newspaper printed in Chile’s capital, Puerto Varas is a fusion of southern Chilean and Germanic culture.

Puerto Varas is small, but offers great opportunities. For the outdoor enthusiast, there is kayaking or boating on Lake Llanquihue and the Petrohue river, skiing or trekking on Volcan Osorno, and numerous biking and running areas. For the homebody, there are boutique hotels, cozy cafés and artisan shops and boutiques. Check out the best things to do in Puerto Varas, here.

One of a kind

In Puerto Varas, you’ll find friendly street dogs, blooming flowers in all seasons, delicious kuchen and coffee, kind people and amazing views. You might not have known Puerto Varas ever existed, but after one visit, you’ll never forget this pretty little German spot in southern Chile.

As picturesque destination that truly has something for everyone, Puerto Varas is an unmissable stop-off on your next Chilean trip.