This South American Country Now Has its First Wine Hotel 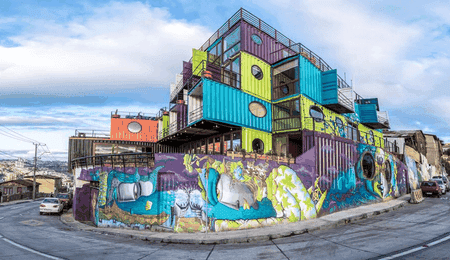 Have you ever seen an enormous rusty freighter ship passing sluggishly over the mid-ocean swell, stacked with shipping containers, and thought it would be perfect for building a hotel? We haven’t either but that is exactly what happened in the chic, trendy oceanside city of Valparaíso, Chile.

Though the city of Valparaíso in Chile is located on the Pacific coast, it doesn’t attract any beach goers as its shores are used for solely economic purposes. The port of Valparaíso sees tens of thousands of freight containers pass through on a weekly basis. From the streets overlooking the city, you can see the multicoloured giant lego pieces stacked up on moored ships or on the land next to the cranes that move them. 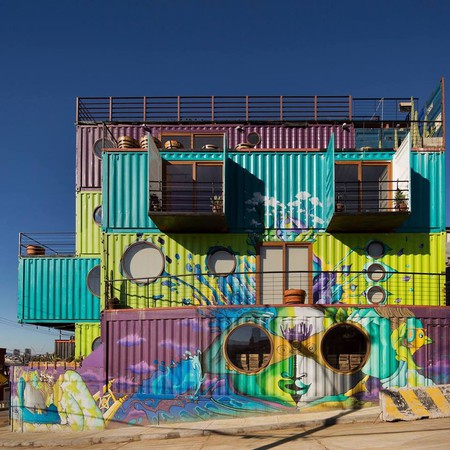 What seems like an eyesore to most people was viewed as a business opportunity for Grant Phelps, the Kiwi who opened his very own wine hotel made out of these shipping containers and suitably named it Wine Box. Committing to the ideas of reducing, reusing and recycling, the location of his new hotel even sits on an old landfill atop Cerro Mariposa (or ‘butterfly hill’). The interesting stories do not end there as the shipping containers, which have travelled millions of kilometres, have been traced to ships that were transporting over 100 kilos of cocaine hidden in coffee tins. 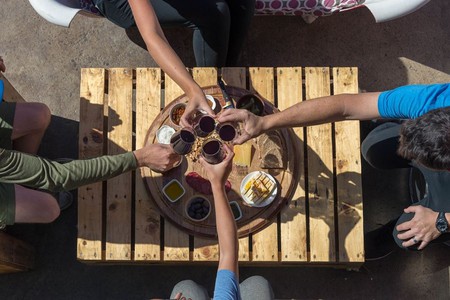 The hotel’s concept revolves around the theme of putting something used back to work: the bar stools are recycled wine barrels and much of the furniture is made up of reused shipping pallets from, you guessed it, a winery. Phelps is no stranger to wine himself and is by no means jumping into this project just to make money—this is his passion. He spent time working at Chile’s Viu Manent winery and held the title of head winemaker at Casas del Bosque in the Casablanca Valley.

WineBox Valparaiso is currently the only hotel in South America producing its own wine on-site. When it first opened, its guests were treated to a hands- and feet-on approach to making wine: with their bare feet and hands, they manually crushed grapes to produce Chile’s only completely body-plunged wine. 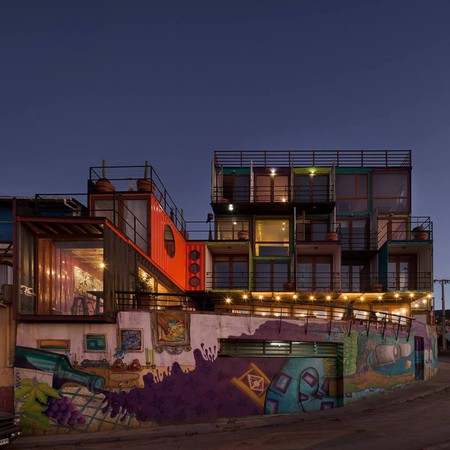 Their hard work will be ready for drinking at the beginning of summer exclusively at the hotel as Phelps wants to make his nectar available for guests and visitors of the hotel only.

The abstract, colourful and somewhat punky hotel, which blends in perfectly with Valparaíso’s street art strays away from the conceptions of wine culture being snooty and meant only for the upper class and older generation. Instead, wine can be enjoyed by anyone, anywhere.