The Top 10 Things To See And Do In Barrio Bellavista, Chile 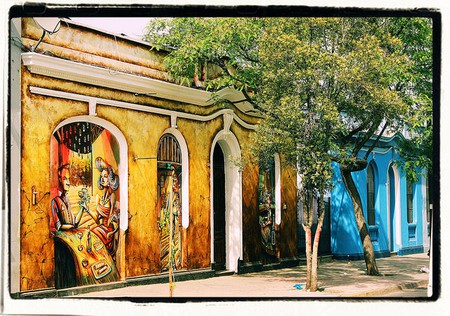 Tucked between the Mapocho River and San Cristobál Hill in Santiago is Barrio Bellavista. Known since the 1970s as the city’s bohemian quarter, this area is popular for its vibrant nightlife. Whilst it certainly excels in this area, Bellavista offers a wide variety of other things to do and see during the day too. Here’s a rundown of the top 10 things to explore and enjoy in Barrio Bellavista, Santiago, Chile.

Spend a little time just looking around here. There are a number of reputable companies who offer tours of the area, both on foot and by bike. Want to go at your own pace” There’s always the self-guided option. Or simply put the map away and get lost for a couple of hours; the streets of Barrio Bellavista are so brightly colored it’s like being in a dream. Around every corner there’s a new piece of graffiti art to be awed by. Along Calle Pío Nono, Bellavista’s tree lined main street, the pavements are covered with tables where you can sit, drink something cold and soak in the splendid ambience. 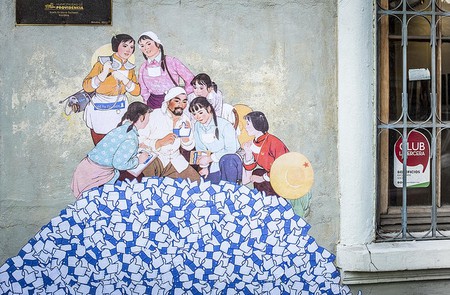 Perhaps unsurprisingly given its arty reputation, Bellavista has plenty of stalls, shops and boutiques where you can pick up all kinds of handmade items, from bracelets to hefty sculptures. Avenida Bellavista is filled with places selling jewellery and trinkets carved from lapis lazuli, a glittery blue gemstone which, though rather pricey, seems entirely appropriate to the neighborhood and its dazzling array of color. There’s also a weekly craft market that takes up the whole length of Calle Pío Nono, with people coming from all over the city to buy, sell or just hang out there. 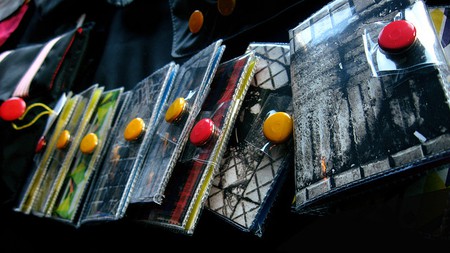 Museum
Facebook
Email
Twitter
Pinterest
Copy link
Share
Map View
Nestled against the slope of Cerro San Cristobál is La Chascona, the former home of Pablo Neruda, Chile’s Nobel prize winning poet. Nowadays it’s a museum dedicated to Neruda’s life and work. Like most of the houses in Bellavista, La Choscana hums with color, its vivid blues reflecting the poet’s love of the sea. Inside, the house features quirky artworks and even quirkier furniture. Even if you’ve never heard of Pablo Neruda, La Choscana is worth a visit since it encapsulates the vibrant, bohemian feel for which Bellavista is renowned. The only downside is you might end up wishing you live there. Call ahead for a guided tour.
Open In Google Maps
192 Fernando Márquez de La Plata, Santiago, Región Metropolitana, Chile
+56227778741
Visit Website
Give us feedback

An incongruous green bulge in the middle of a bustling city, Cerro San Cristobál rises 300 meters above Santiago. From the Bellavista entrance it’s an easy hike to the top, and you’ll be rewarded with magnificent panoramic views. At the peak is a 22 meter statue of the Virgin Mary, Santiago’s answer to Rio de Janeiro’s statue of Jesus. San Cristobál Hill is part of the Parque Metropolitano, the largest park in Chile, which contains two pools, a children’s playground, the Botanical Garden and the Chilean National Zoo. 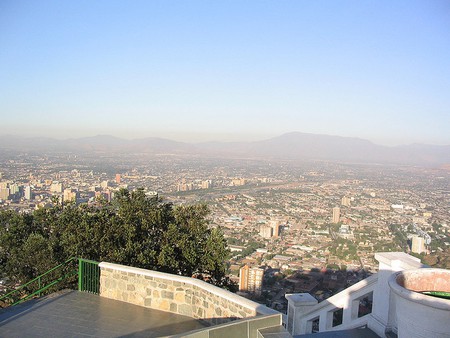 Just off Pío Nono is Patio Bellavista, an outdoor complex of shops, cafés, restaurants and bars set around a large main square. Open since 2006, it’s a relatively new addition to the area and a wildly popular one. During the day it’s a pleasant spot in which to have a coffee and hide from the sun, but it’s in the evening when Patio Bellavista really comes to life. People from all over Santiago converge on the place and everything lights up at this time. There is often live music on the weekends, but it boasts a really vibrant atmosphere any night of the week.
Patio Bellavista, Pío Nono 61, Santiago, Chile 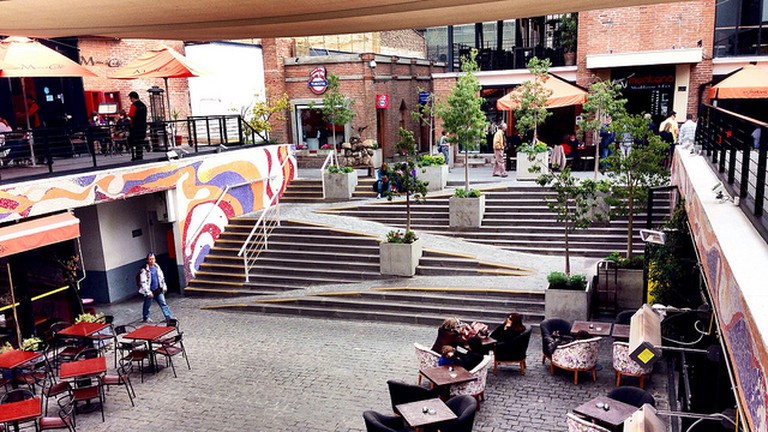 Plaza Camilo Mori is named after the Chilean artist who lived and worked in Bellavista, the man who helped to establish the area’s reputation as a bohemian enclave. Situated off Pío Nino, right in the heart of the neighborhood, the plaza is home to a handful of creative venues, including the Teatro Mori Bellavista. At one end sits Castillo Lehuedé, also known as Castillo Rojo, a great big red building that’s been there since 1923 and is currently being used as a boutique hotel. Timeless and full of character, standing in the plaza gives you a real sense of what Bellavista is all about. 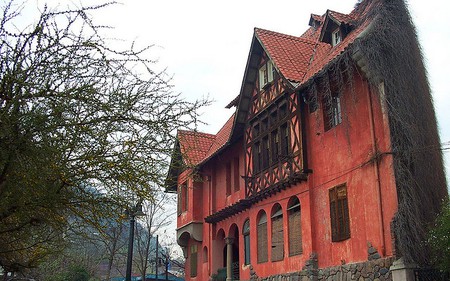 Based in a former convent building, the Centro Cultural Montecarmelo is Bellavista’s cultural hub. A possible influence on the design of the similarly laid out, but much much newer, Patio Bellavista, the beautiful old building is arranged around a large courtyard, where numerous events are held throughout the year. Alongside a regular program of classes and workshops, there are concerts, banquets, theatrical productions and film screenings. Whatever is going on, the center is worth a visit as it gives a flavor of what it might be like to live in Bellavista and be a part of its community.

There are so many fine restaurants lining the streets of Bellavista it’s impossible to say which one is the best. Azul Profundo is long established and consistently popular. Specializing in fresh seafood, a large section of its menu is dedicated to ceviche, a South American specialty consisting of fine slices of raw fish cured in lemon juice. Another must try food is cadillo de congrio, a traditional eel chowder. Prices are modest, staff are friendly and, it being Chile, there’s an impressive wine list. The decor is nautical themed: expect mermaids, ships’ wheels and swordfish.
Azul Profundo, Calle Constitucion 111, Santiago +56 2 738 0288 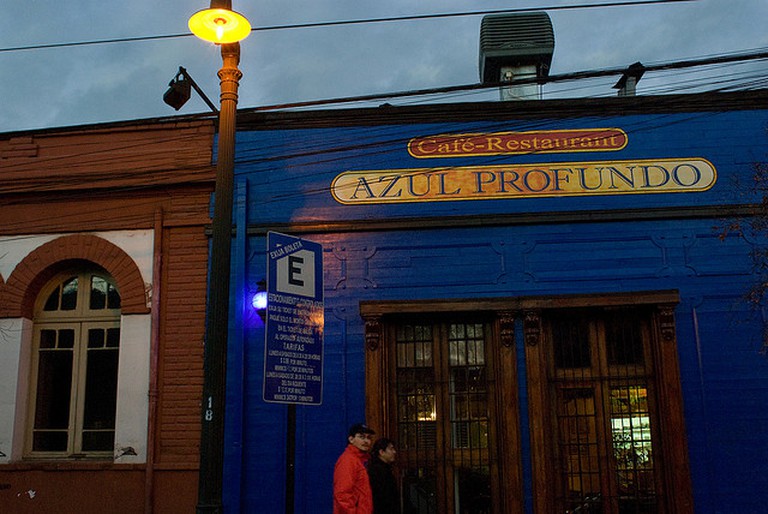 Built in 1884, the Santa Filomena Parish is one of the oldest churches in Bellavista. It’s a grand, Neo-Gothic building with a snow white spire visible from anywhere in the neighborhood. A lack of funding meant that for a while the building was in a state of disrepair, but now it has been restored to its former glory and is again open to the public. Santa Filomena attracts a lot of visitors and not just because the church’s cool interior provides a bit of respite from the sometimes intense Chilean sun; the place abounds with elaborate stone carvings and beautiful stained glass. 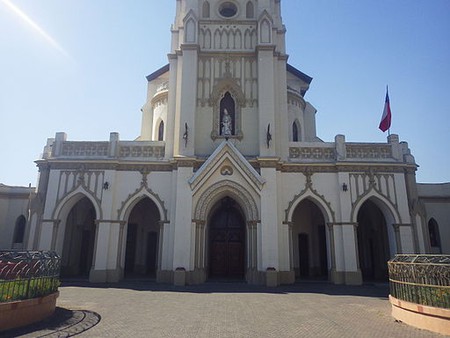 Have A Drink At Bar Dos Gardenias

Bar Dos Gardenias is a small and softly lit bar. In the corner, there’s a little stage on which bands play mellow flamenco music most nights. Spread yourself out on one of the sofas and order a mojito made with mint and brown sugar. It’s such a cool place it even has its own theme song, go to the website to give it a listen.
Bar Dos Gardenias, Antonio López de Bello 199, Santiago +56 2 2474 4534 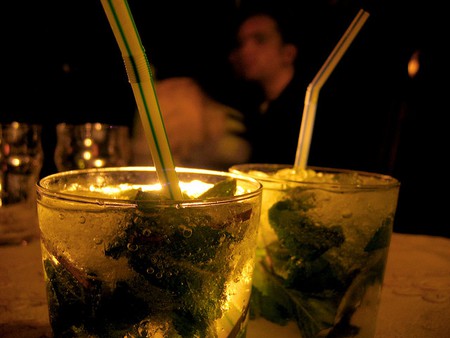 mojitos acompañados I | © Ana María Guardia/Flickr
Give us feedback