The Complicated Past of Chile’s National Dance: La Cueca 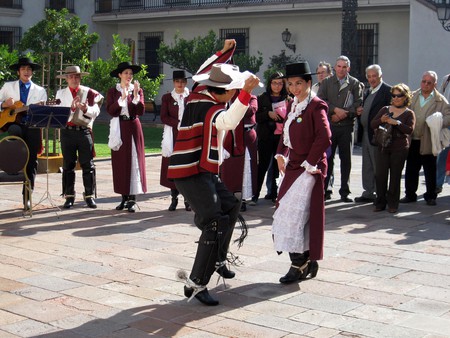 This typical countryside dance has been around in Chile for generations. Rooted strongly in Chile’s rural and working class culture, la cueca is one of the country’s richest traditions. However, as with many aspects of Chilean culture during the dictatorship, la cueca fell under General Pinochet’s shadow for many years, becoming a symbol of his regime’s oppressive rule.

Historians believe that la cueca originates from a regional dance, the zamacueca, which has roots in Spanish, indigenous, and African traditions, and was originally danced in Peru. As the dance evolved during colonial times, it made its way throughout the region to countries like Bolivia and Chile. In the 19th century, la cueca became a popular activity in local taverns throughout Chile. In the 20th century, the dance was especially common in rural areas or in the working class neighborhoods of Santiago.

La cueca is all about romantic conquest. Funny enough, the way la cueca is danced resembles the mating ritual of a hen and a rooster. The use of the handkerchief is a key element of the cueca dance, as partners will raise it above their heads or behind their backs as they stomp their feet and circle one other.Throughout the dance, it’s important that cueca dancers maintain strong eye contact throughout the different steps and movements.

La Cueca Under a Dictator

Everything changed in Chile after the 1973 coup d’état when General Augosto Pinochet and the Chilean army violently ousted the democratically-elected government of President Salvador Allende. Chile’s famed folklorist Victor Jara was tortured and executed in Chile Stadium and thousands of left-wing politicians, activists, intellectuals, and artists were killed, kidnapped, or exiled. Effects of the dictatorship were widespread, and the Chilean pueblo wasn’t able to gather or celebrate like the were before. As with many aspects of Chilean culture, la cueca did not escape Pinochet’s grip.
http://instagram.com/p/BKODn1ugNsx/

Besides establishing strict societal rules, like curfews, as part of his authoritarian regime, Pinochet incorporated la cueca into his military parades, taking it from the working class and establishing it as a symbol of the dictatorship’s oppressive hand. Under Pinochet, la cueca was also declared Chile’s official national dance in 1979.

In response to the horrendous human rights violations under Pinochet, la cueca then took the form of political protest. Mothers, wives, and family members of kidnapped and disappeared Chileans would dance la cueca alone. Without their partners present, their dance would illustrate the loss of their loved one, drawing public attention to the human rights violations occurring in Chile. The striking visual of the solo dancer externalizes the absence of these lost lives. These solo dancers became recognized worldwide when Sting released his song “They Dance Alone.”

Why are these women here dancing on their own?
Why is there this sadness in their eyes?
Why are the soldiers here
Their faces fixed like stone?

Since Chile’s return to democracy nearly 30 years ago, la cueca has lost much of the stigma that it had during the dictatorship. It’s been reclaimed by Chileans as a celebration of working class and “huaso,” or countryside culture. During the celebratory Fiestas Patrias holidays, for example, Chileans of all ages enjoy getting out their hankies and stomping the day away.