On the Trail of the Birdman on Easter Island 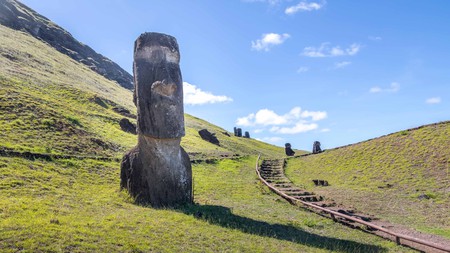 For more than 150 years, young men on Easter Island took part in the perilous Birdman contest. Today, travellers can follow in their footsteps and gain an insight into an often overlooked aspect of the island’s history.

On an exposed, vertigo-inducing clifftop on the southwest tip of Easter Island, the ruined ceremonial village of Orongo gazes down on Motu Nui, the largest of three craggy islets 2km (1.2mi) offshore. If you brave the powerful, near-constant winds and visit the site today, it is hard to imagine why anyone would even contemplate clambering down the 300m-high (984ft) cliffs, swimming across a choppy, shark-infested stretch of the Pacific Ocean and scaling Motu Nui.

Yet, for more than 150 years, young men on Easter Island did just that in a dangerous annual contest to collect the first egg laid by a sooty tern (a migratory seabird) of the season. The winner’s sponsor, one of the tribal chiefs, was named Tangata Manu – Birdman – at a ceremony in Orongo and granted leadership of the island for the following 12 months.

Today, visitors to Easter Island (known to locals as Rapa Nui) can follow in the footsteps of the Birdman contestants – at least as far as Orongo. The trail starts in the small settlement of Mataveri, just south of Hanga Roa, the island’s only town. It shows that there is much more to this far-flung island, one of the most remote inhabited places on Earth, than just its famous monolithic moai statues.

Now home to the airport, Mataveri had a very different role in the 1700s, a chaotic and violent period of the island’s history. “To sum it up very briefly, the islanders arrived here and expressed their religious beliefs of ancestor worship via the carving of these enormous statues,” says James Grant-Peterkin, author of A Companion to Easter Island, tour guide and the island’s British honorary consul.

“That continued for 500-600 years until the so-called, much-argued-about ‘collapse’ took place. This is when the moai carving stopped, the platforms on which the moai stood were destroyed, and the moai were pushed over. What the islanders then had to come up with was some kind of religious alternative in order to maintain order on the island.”

The result was a month-long celebration that took place every spring and culminated with the Birdman competition. Each chief put forward an athletic young man, known as a hopu manu, to compete on their behalf and hopefully win them authority over the island for the coming year.

The route to Orongo

The event started in Mataveri, from where representatives of the island’s various competing factions hiked uphill to Orongo. Today, the dirt trail they left behind is little trodden. It ascends sharply through a wood populated by cypress, acacia and papaya trees, thorny bushes and fearless birds who will land right beside you if there’s any grub to be had. Eventually, you emerge into the sunshine as the trail continues through grassland dotted with large purple thistles and tiny red and yellow flowers. If you glance back, you’re rewarded with sweeping views of Hanga Roa.

After 40 minutes or so, the trail reaches the summit of the hill, and it suddenly becomes clear that you’ve been scaling the side of a volcano. Stretching out in front of you is Rano Kau, which has an almost perfect cauldron-shaped crater, save for a large chunk on the far side that was blown out in an eruption almost a million years ago – it now provides a perfectly framed view of the shimmering blue Pacific beyond. Islands of tangled reeds float on the surface of the crater lake, the scene resembling the map of an unknown archipelago.

A further 15-minute walk brings you to Orongo. With sheer cliffs and thousands of kilometres of the Pacific on one side and a volcanic crater on the other, the village feels as if it is perched on the edge of the world.

Today, Orongo is a protected site, administered by Easter Island’s conservation authorities. Beyond the small visitor centre, a path leads past rows of low, oval-shaped houses built from basalt slabs and carefully restored in the 1970s. Each of them has a tiny entrance, barely big enough to crawl through, in an attempt to keep out both the elements and any potential intruders. One of the larger buildings was once home to Hoa Hakananai’a, a 2.5m-tall (8ft) moai covered with exquisite Birdman symbols; it now resides in the British Museum in London, though many islanders are calling for its return.

The site also includes some of the island’s finest petroglyphs, including of the Birdman and the creator god Make Make, though many are weathered and slowly fading. There are also elements of Rongorongo, one of only a handful of written languages to develop independently, but whose beautiful geometric glyphs remain tantalisingly undeciphered.

Southwest of Orongo lies Motu Nui, beautiful but inhospitable. When the Birdman contestants reached the islet, they set up camp and waited anxiously for the first sooty tern egg of the season to be laid. Whoever managed to claim the egg would signal back to the crowds on Orongo. “The winner would then transfer the power to his chief who would become the Birdman, the spiritual leader of the island for the next 12 months until they would gather and do the whole thing again,” says Peterkin.

As the new Birdman started his victory procession back to Mataveri, his hopu manu was left to swim back to the mainland, carefully keeping the egg safe in a pouch attached to his head.

The last Birdman contest took place in 1867. “Catholic missionaries put an end to the event, whose religious beliefs centred around bird’s eggs and… Make Make,” writes Grant-Peterkin in A Companion to Easter Island. More than 150 years on, Orongo is now itself under threat, with erosion rendering large sections of the site unstable.

A display panel in the visitor centre starkly warns that Orongo is “at constant risk of being lost forever” – all the more reason to hike the Birdman trail while you still can.