Santiago Metropolitan Cathedral | © MonicaVolpin/Pixabay
For a country with a relatively small population, Chile has an abundance of two things: coastline and churches. From the uniquely famous Chiloe churches to the Spanish colonial cathedrals, we take a look inside some of Chile’s oldest and most historical churches.

Church
Iglesia de la Matriz | © Omar Andrés León Torres/Flickr
The ground upon which this church sits has been home to religious buildings since Rodrigo González de Marmolejo established the first temple in Valparaíso back in 1559. What began as a little hut has received donations from wealthy local families to shape it into the church it is today.
More Info
Open In Google Maps
71 Santo Domingo, Valparaíso, Valparaíso, Chile
+56322214876
View menu
Visit website
Visit Facebook page
Send an Email
Give us feedback

Off the coast of Chile’s main Chiloe Island is Quinchao where you’ll find one of the oldest of the Chiloe Island churches. Unlike the awe-inspiring marble structures in other parts of Chile, these churches attract visitors for their shingled exteriors and unusual architecture. 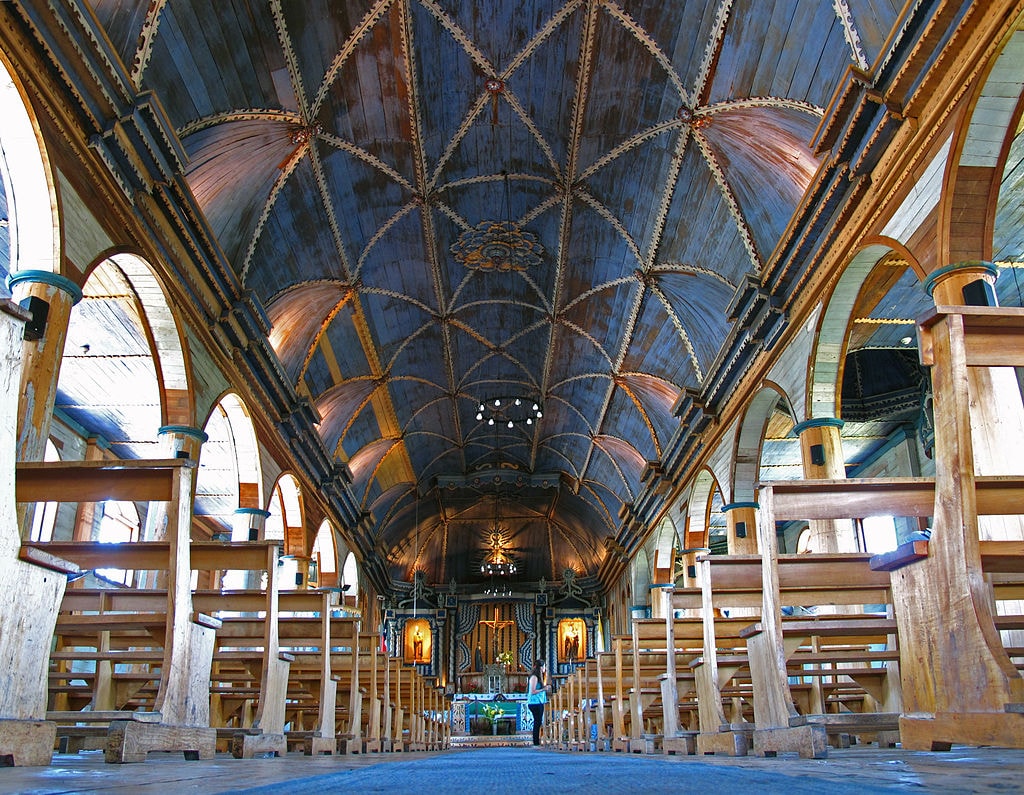 Church
This is the second oldest church in Chile, opened in 1625, and is the setting to an eerie story dating back to Santiago’s 1647 earthquake. A wooden statue of Jesus that sits inside the church was shaken so much that the crown of thorns on the statue’s head slipped down to the neck. When a civilian noticed and tried to adjust the crown back to the statue’s head, Christ’s face began bleeding and another tremor began to occur. The crown has not been moved since and remains around the statue’s neck.
More Info
Open In Google Maps
170 Obispo Villarroel, Santiago, Región Metropolitana, Chile
+56226380978
View menu
Visit website
Visit Facebook page
Send an Email
Give us feedback

Building, Church
Iglesia de San Francisco |  © Javier Alfaro/Flickr
One of the many churches in Chile’s capital is the quaint brown and tan-coloured church of San Francisco located on Avenida Bernardo O’Higgins. Constructed in 1622, this church is a resilient building as it has been damaged by two earthquakes—one in 1647, the other in 1730—but restorations have kept the main facets of the building in good condition with very subtle changes that, for the most part, go by unnoticed.
More Info
Open In Google Maps
816 Avenida Libertador Bernardo O'Higgins, Santiago, Región Metropolitana, Chile
+56226383238
View menu
Visit website
Visit Facebook page
Send an Email
Give us feedback

Cathedral, Church
South of Santiago is the city of Rancagua, home to the Sagrario Cathedral which had the construction of its first temple start in 1550 but has had additions and restorations take place over the years. During the Battle of Rancagua in 1814, the church suffered some damages and Chile’s recent earthquake of 2010 warranted renovations that began in 2011.
More Info
Open In Google Maps
45 Paseo Independencia, Rancagua, O'Higgins, Chile
+56722230048
View menu
Visit website
Visit Facebook page
Send an Email
Give us feedback

Cathedral, Church
Santiago Metropolitan Cathedral |  © MonicaVolpin/Pixabay
Overlooking the Plaza de Armas in the center of the capital is the towering Santiago Metropolitan Cathedral which was another one of the many churches affected by the numerous earthquakes in Chile. Having taken 52 years to build, this church has seen some updates, most significantly and recently in the early 1800s.
More Info
Open In Google Maps
Plaza de Armas, Santiago, Región Metropolitana, Chile
+56227875600
View menu
Visit website
Visit Facebook page
Send an Email
Give us feedback

Church
Santiago Domingo Church in Santiago | © Cako Romero/Wikimedia Commons
The current church on this site is one of many upgrades as the first church on this property was built back in the 1500s but earthquakes in 1595, 1647 and 1730 destroyed the original buildings. The construction of the fourth and final attempt, which is the church that stands today, began in 1747.
More Info
Open In Google Maps
595 21 de Mayo, Santiago, Región Metropolitana, Chile
+56226331584
View menu
Visit website
Visit Facebook page
Send an Email
Give us feedback

Church, Museum
This maroon and white-trimmed church just around the corner from the Plaza de Armas in Santiago is now a Chilean monument and was constructed in 1795. It houses a small museum that contains articles from Chile’s famous Easter Island.
More Info
Open In Google Maps
649 Merced, Santiago, Región Metropolitana, Chile
+56226649189
View menu
Visit website
Visit Facebook page
Send an Email
Give us feedback
Give us feedback