An introduction to Chilean rock in 11 songs 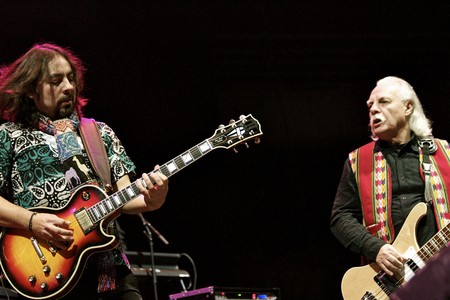 Unlike other regions of South America, which boast vibrant dance music traditions, Chile has fostered much of the continent’s best rock music. The following tracks are just a taste of what Chilean musicians have to offer the world.

Inspired by bands like The Clash at a time when Chile was closed off from the rest of the world, this punk rock band brought a new genre of music to Chile while standing up to social injustice in the 1980s. With their critical lyrics and punk rock attitude, Los Prisioneros (The Prisoners) gave Pinochet’s dictatorship the middle finger and inspired a nation in crisis to dance, shout and sing along.

One of Chile’s all-time best rock bands, alternative rockers Los Bunkers have been serving angsty Chilean adolescents an outlet since 1990. Los Bunkers were formed in the ‘cuna’ or cradle of Chilean rock, as the local saying goes, in the southern city of Concepción. The band was heavily influenced by the rock of the 1960s and 1970s, also incorporating Chilean folklore. Though Los Bunkers have officially broken up, they’ve left an impressive rock legacy in Latin America.

Pop and alternative rock singer Francisca Valenzuela is one of Chile’s leading contemporary musicians. Her first two albums went platinum in Chile – where she has developed her career and spent much of her adult life – though she was born in San Francisco. Beyond her music, Valenzuela has taken an activist role, advocating for more female voices in Latin American entertainment. She organises the women’s music festival Ruidosa, which bolsters creativity and solidarity among Chile’s female musicians.

Drawing upon the work of folklorists like Violeta Parra and the poetry of Pablo Neruda as inspiration, Los Jaivas are about as Chilean as you can get. Easily one of the most influential bands in Latin America, Los Jaivas got their start in the 1960s. Over the 50 years they’ve been actively performing, their music has evolved from its tropical roots to progressive rock, jazz and classic rock. Though some members of the band have tragically passed on since Los Jaivas started playing, new members have joined the fray and they continue to play concerts in Chile and around the world.

Chile’s greatest band of the 1990s, Los Tres have put out a diverse selection of music over the course of eleven different albums. The band was most active from 1989 until 2000, and reunited in 2010 to put out their most recent album Coliumo. Rejecting the trending pop rock aesthetics of their time, Los Tres incorporates jazz rock, alternative rock, and rockabilly sounds into their music, which can also lean towards the grunge genre.

Innovative and distinctive, Astro is an obscure contemporary Chilean band with some unforgettable tracks. It’s no wonder these guys are from a country known for its star-gazing. As their name might suggest, this cosmically inspired indie rock electronica group made a splash in the international music scene with the release of their self-titled album Astro in 2011.

Funk rock Chilean band Chancho en Piedra is regarded as one of Chile’s most influential acts. Chancho en Piedra’s distinctive sound developed in La Cisterna, a neighbourhood of Santiago, back in 1994 and the band remains active today. Their bold, irreverent lyrics, unique delivery and use of Chile’s colourful slang words reflect the band’s celebration of urban culture and Santiago identity.

Grammy-nominated singer/songwriter Nicole got her start in the late 1980s. After a successful career in the 1990s, Nicole continues to produce relevant music, like her 2012 hit Hoy.

Carefree and folksy, Camila Moreno is one of Chile’s up-and-coming singer/songwriters of rock and folk music. She is often compared to legendary Chilean folk singer Violeta Parra. Moreno’s distinct voice and authenticity give her music an approachable appeal.

This Chilean rock band started out in the late 1980s and their career has now spanned a staggering four decades. In 2001 the band won the Latin Grammy for Best Alternative Rock album for Uno. Many different musicians have cycled in and out of La Ley, which started out with a new wave sound and evolved into pop and alternative rock.

Heavily influenced by Brazilian music traditions (thanks to his Brazilian father), Joe Vasconcellos is a beloved Chilean rock music composer and singer/songwriter. His unique style of rock is all thanks to the Latin American fusion and tropical music he incorporates in his tracks.