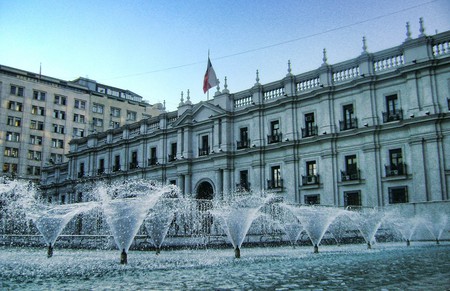 The Santiago Centro neighborhood in Chile’s capital offers the majority of the city’s most historic buildings and architectural landmarks. Discover the best of this barrio through this easy-to-follow walking tour guide.

One of Chile’s prized architectural landmarks, the Chilean National Museum of Fine Arts was built in 1910, 100 years after Chile declared its independence from Spain. French-Chilean architect Emile Jécquier designed the structure, which stands proud on José Miguel de La Barra street in Parque Forestal. Jécquier modeled the museum layout after the Petit Palais of Paris, designing it in the Beaux-arts style, with nods to both the Neoclassical Second Empire and Baroque Revival styles. Architecture fans will also notice some traces of Art Nouveau. Inside the museum, when you look up towards the ceiling you can see a gorgeous glass cupola, which was imported from Belgium in 1907.

Nearby food and drinks: If you need a pick-me-up after meandering around the museum, trot on over to the nearby Colmado Coffee for a cappuccino and gluten-free treat. 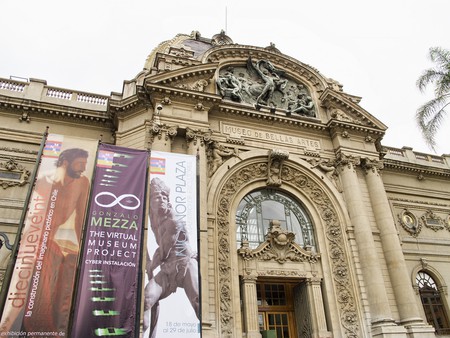 This reddish-pink Basilica is easy to spot, located on the corner of Merced and Mac-Iver streets. Originally constructed in adobe back in 1566, repeated earthquake damage to the structure spurred many different reconstruction efforts. Italian architect Joaquín Toesca played a major role in the design of the Basilica standing today. Inside the Basilica there’s also a small museum that includes interesting religious art and artifacts.

Part of Santiago’s historic center Plaza de Armas, the Metropolitan Cathedral of Santiago is an easy stop on any tour of Santiago Centro. The neoclassical cathedral that stands today was completed in 1800, though the original cathedral was constructed in the late 1500s. Due to destructive earthquakes, the cathedral has undergone a series of reparations and reconstruction over the course of the centuries. Though many have worked on the structure, Italian architects Joaquín Toesca and Ignacio Cremonesi played the most crucial role in its design, Toesca in charge of the cathedral’s façade and Sacred Church, while Cremonesi added a Tuscan and Roman style that completed the construction.

Nearby food and drinks: After a visit to the cathedral and walk around the plaza, pop into nearby notorious Santiago dive bar La Piojera to order the house special, the terremoto – the earthquake. 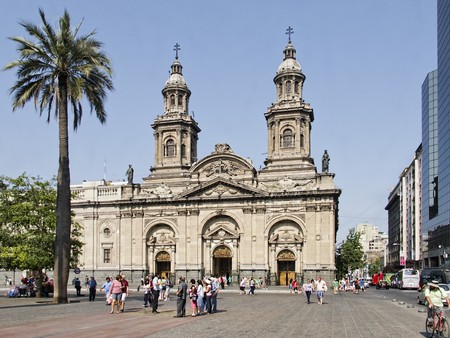 Another stunning example of Santiago neoclassical architecture, the Courts of Justice Palace of Santiago is where Chile’s Supreme Court and other national courts are held. The two phases of construction on this sizeable structure were completed between 1905 and 1930. French architect Emilio Doyère designed the palace, which features Doric and Ionic columns, three-story arcade and a two-tiered portico. The building was declared a national historical monument by the Ministry of Education in 1976.

Nearby food and drinks: El Rápido, right across the street on Bandera is a primo place for cheap, delicious empanadas or a classic Chilean sandwich. The price is right and service is fast, making it the perfect place for a speedy meal.

Another one of Santiago’s notable neoclassical structures, La Moneda Palace was a originally a mint during colonial times. Now it’s the country’s most important political headquarters, as the seat of the president and home to three cabinet ministers. The structure was designed by Italian architect Joaquín Toesca and opened in 1805, though some construction of the palace was still being finished. La Moneda transitioned into a seat of government in 1845 under president Manuel Bulnes.

Home to Chile’s most important stage, presenting top-notch ballet, operas and concerts, the Municipal Theater of Santiago is an attraction all on its own. The French neoclassical theater was inaugurated in 1857 after Chilean President Manuel Montt Torres issued a decree for the theater’s construction in 1853. The structure was designed by two Frenchmen, architect Francois Brunet De Baines and civil engineer Felipe Augusto Charme de l’Isle. Inside the theater, the main stage features a gorgeous ceiling painting and a stunning crystal lamp. 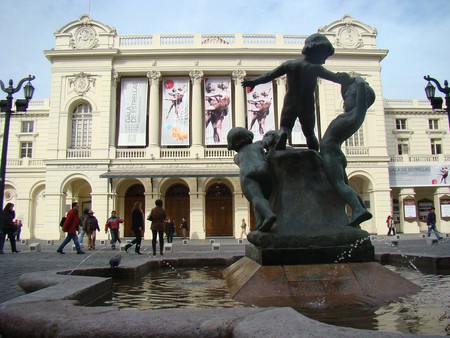 Check out the map below to plan your route for an afternoon tour of historic Santiago Centro’s best architectural structures.