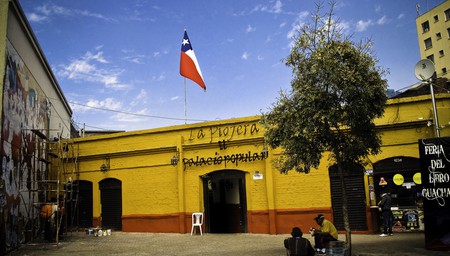 With its sticky floors, powerful terremoto drinks and scribbled-on tables La Piojera is famous for its boisterous crowd and down-to-earth atmosphere. Locals and visitors alike enjoy this beloved dive bar, a must-see destination for anyone seeking adventure and a powerful beverage. 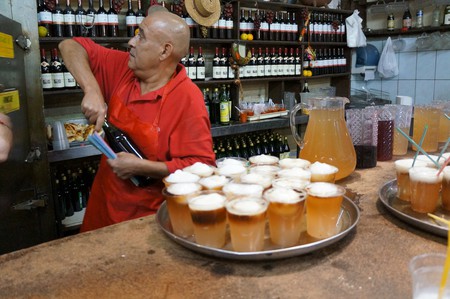 The name La Piojera already hints at what to expect from this unique and beloved local dive bar. The bar gets its disparaging name, The Fleahouse, from former Chilean president Arturo Alessandri Palma who made a visit back in 1922, seeking out the bar for its popularity among Chile’s working class. When he arrived, a dismayed Alessandri famously exclaimed, “You guys brought me to this fleahouse?” Much like fleas themselves, the bar’s owner found it difficult to rid the bar of this insulting name, reclaimed by the bar’s clientele as a point of pride. So La Piojera stuck, becoming the bar’s unofficial name for several decades, though it continued to operate under the more proper names “Santiago Antiguo” and “Bar Democrático”. Finally, in 1981, La Piojera became the establishment’s official name, and the name you can now spot above the bar’s humble entrance.

La Piojera opened its doors many years before this legendary visit from Alessandri. The bar first started serving clients in 1896, located next to the Mercado Central, two decades after the market was built in central Santiago. The bar has always been strongly rooted to working class Chilean culture, and for decades served a largely male clientele. It’s a prime example of a Chilean picada or pica, the Chilean name for a local hole-in-the-wall eating or drinking spot.

Nowadays, La Piojera serves more than just its working-class regulars. The dive bar is a favorite tourist spot for those wanting to try Chile’s national drink, el terremoto or “the earthquake”. After gulping down just one, it’s easy to understand how this deceptively sweet drink gets its name. Made with pipeño, a sugary fermented wine, pineapple ice cream with either Fernet or grenadine on top, this alcoholic sorbet concoction goes down easy but packs a surprising punch. The terremoto is most often served during Chile’s national holiday, Fiestas Patrias, though La Piojera serves them up year-round.

Besides terremotos, beer and Chilean wine, La Piojera also cooks up an array of delicious and authentic local dishes. The popular Chilean food pernil, or pork shoulder, is commonly served at the establishment. Other popular menu items include meat-stuffed empanadas, a traditional Chilean soup called cazuela, and chorrillana which includes fries, beef, caramelized onions and a fried egg.

La Piojera’s crowd is lively and festive nearly every night and the bar is also an ideal place to watch a local soccer game. Visitors also might catch some traditional cueca dancing during a visit or even hear some typical Chilean folklore. Located close to other tourist destinations like Plaza de Armas, La Vega Central produce market and Mercado Central, La Piojera makes for the perfect stop while exploring Santiago’s historic center.