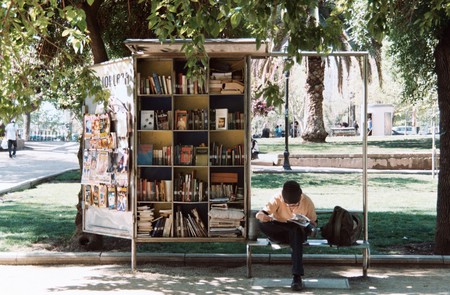 The capital of a country known as the País de Poetas (“Country of Poets”), Santiago is a literary city full of intrigue and inspiration. For book lovers, there are plenty of places to learn about the city’s bookish past and places to sit and escape, head buried in a good novel.

Although many of its greatest poets and folklorists were from further Chilean regions, many converged in Santiago. The movement and culture of the capital city supported and inspired some of the world’s most famous literary figures.

There are a few buildings that attest to the city’s bookish heritage. Among the most intriguing is Pablo Neruda’s La Chascona in Bellavista. At the foot of the Cerro San Cristobal Hill, Neruda’s house is full of interesting quirky objects and is symbolic of Chile’s political and artistic past. When the poet died in the early months of the Pinochet dictatorship, the house was ransacked and destroyed by military officers. Now, reconstructed, it stands as a valuable testament to the strength and resilience of Santiago’s artistic culture. 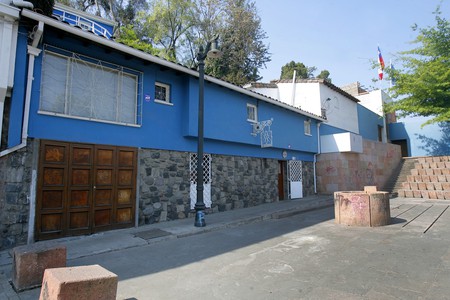 One of Neruda’s mentors was fellow Nobel Literature prize winner, Gabriela Mistral. From the Northern somnambulant hills of Valle del Elqui, she spent a large part of her career in Santiago, where she met other poets and worked as a teacher. The Barrio Yungay school in which she trained and qualified as a teacher in 1910 is now open to the public and was converted into a museum of education in the 1940s. In 1985, the museum was shut down due to damage from an earthquake and lack of funds from the dictatorship. However, in 2006 it reopened once more under the name of Museo de la Educación Gabriela Mistral, honoring the revered poet who once studied there and promoting the values of public education that Mistral actively campaigned for during her lifetime.

One of the most important places to learn about (not only about literature but about pretty much anything) is, of course, the national library of Chile, Biblioteca Nacional, a 1920s building that regally stands out on the congested main street Alameda. You won’t find stacks of books to dive into, but the museum does display rare texts from some of Chile’s former politicians and thinkers and hosts interesting temporary exhibitions. It’s free to visit, and a welcome respite from the city’s rush. A must-stop for any kind of book lover.

The Biblioteca Nacional is, of course, a huge, vast and peaceful place for anyone to stop by with a book. Also, in the nearby parks, Parque Forestal and Parque Bustamente, there are small libraries with cafés. At Café Literario, which is funded by the Providencia municipality, anyone is allowed to walk in and read one of the libraries’ books on site. Each site offers free Wi-Fi and plugs for those looking to work.

There are also excellent cafés in which to read. La Canela Café Literario on Plaza Brasil has a great atmosphere to sit with a coffee and read for a few hours. There is no Wi-Fi, so the constant tapping and clicking noises of other work cafés are avoided here. Another excellent option is Leerté in Bellas Artes, a small café that boasts books stacked on long bookshelves, a true delight for anyone looking to dip in to a random read for a quiet break.

Santiago is a fantastic place for buying books, and it’s not short on independent bookstores. For a full, comprehensive list, check out our 10 Best Independent Bookstores lists, but if you feel like strolling around the city and casually looking around, head to the street Huérfanos in the city center. Here, there are several bookshops, including Librería Feria Chilena del Libro – thought of as one of the best in Santiago. A few blocks down, there are also several stores on the corner of Plaza de Armas and Compañia de Jesus. 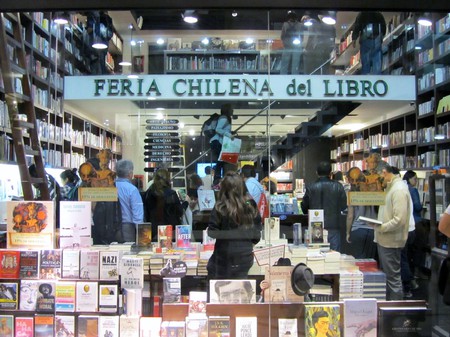 For books that are harder to come by, or those intrigued to discover new canons and categories, there is an annual Feria Internacional del Libro de Santiago. This is a huge book event that spotlights a different national literary scene each year, with over 12,000 books and various talks and events.

Lastly, if you keep your eyes peeled on social media, you’ll regularly see events posted for one-off book fairs, that consistently pop up in parks and plazas, offering both English and Spanish second-hand books for as little as 1,000 CLP (US$1.50).