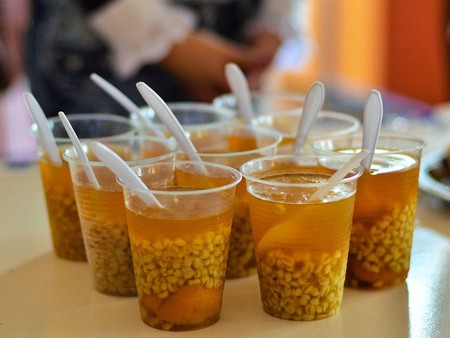 Made from peaches and husked wheat, this sugary and chilled Chilean drink is the perfect refresher on a warm afternoon. Chewy, sweet and drinkable, mote con huesillos is South America’s tasty answer to bubble tea.

There are few things as genuinely Chilean as mote con huesillos. There’s even a local saying that goes “Más chileno que el mote con huesillo,” or “More Chilean than mote con huesillos”. Both mote (husked wheat) and huesillos (dried peaches) have a long history in Chile. Mote dates back to colonial times in this country, when wheat production began in the region. The sale of huesillos started in the late 18th century in Chile, though the foods weren’t paired together until much later.

Although the terremoto and pisco sour are two of Chile’s tastiest drinks, only mote con huesillos is good for any time of day and for people of all ages. Order a cup to wash down one of Chile’s many mouth-watering sandwiches.

Mote con huesillos is made with husked wheat, dried peaches and a sugary syrup

Preparation of the drink involves cooking the mote and adding it to the huesillo syrup, which looks a lot like tea. The syrup is made with caramelized sugar, cinnamon and water mixed with dried peaches. The husked wheat is then added to the hot syrup and cooked and cooled before being served.

Mote con huesillos is so important to Chilean culture, the drink has inspired its very own play

Mote con huesillos is most popular during hot summer months

As mote con huesillos is served chilled, it’s most commonly sold as a refreshing beverage to stay cool during the summertime (December-March). The drink is also quite popular during the national fiestas patrias holidays in September, which occurs in springtime in South America. 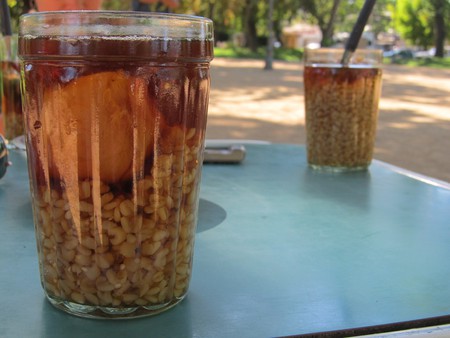 Along with sugar, mote con huesillos can be sweetened with chancaca

Mote con huesillos gets its rich, tea-colored hue and sweet flavor from either caramelized sugar, honey or chancaca. Chancaca is a traditional Latin-American sweetener made with unrefined sugar, with roots in Peru, Bolivia and Chile. When it’s cold outside, Chileans often use chancaca to make a warm, sweet syrup to serve over sopaipillas, which are fried dough pastries.

Travelers in Santiago often trek up the San Cristobal or Santa Lucia hills to soak in a spectacular view of the city. Vendors of mote con huesillos are posted up at both of these hills, offering the traditional drink as a treat after the walk up. The drink usually costs between 700 and 1,300 Chilean pesos, which is less than two US dollars.