You Won't Believe This Jungle Treehouse is Hiding in This City 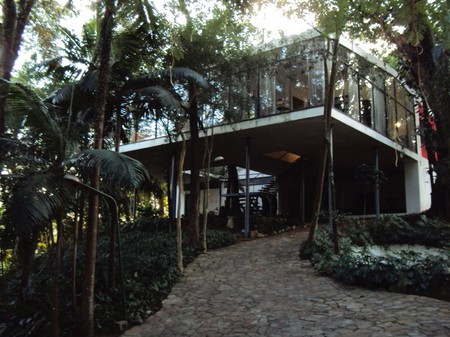 As Brazil’s largest city and home to over ten million people, São Paulo is often considered grey and unsightly. While there is still plenty of color in the city, it is overwhelmingly austere and the “concrete jungle” moniker fits it well. Every now and again, however, São Paulo surprises you. Casa de Vidro is a stunning house in the western neighborhood of Morumbi made almost entirely out of glass and concrete, suspended above acres of natural forest and once home to the most important couple in Brazilian art: Lina Bo and Pietro M. Bardi.

In Portuguese, Casa de Vidro translates literally as “House of Glass”, named after the large, full-length glass windows which form the house’s exterior, sliding fully open to make the house seem a part of the surrounding forest. The entire construction is a modernist masterpiece, suspended above the ground by a number of concrete beams which run all the way through the house, reminiscent of Lina Bo Bardi’s most famous project, the São Paulo Museum of Art (MASP).

The most striking aspect of the Casa de Vidro is its juxtaposition inside the neighborhood. This part of Morumbi is very residential, with winding, hilly streets, precious little commerce and huge, sanitized gated communities. The lush forest and wildlife of Casa de Vidro stand out like a pearl in the middle of a pile of gravel. This can be explained by the fact that – built in 1951 – it was the first house in the neighborhood.

As previously mentioned, the Bardi’s – Lina Bo and her husband Pietro M. – were the most important couple in the history of Brazilian art and architecture. Born and raised in Italy, Pietro was invited to São Paulo in 1946 on the invitation of local entrepreneur Assis Chateaubriand with a view to founding and directing the São Paulo Museum of Art (MASP). A media mogul and patron of the arts, Chateaubriand noticed that the city of São Paulo was in the middle of a post-World War boom and had become a true global metropolis, yet it did not have a world-class art museum.

Pietro moved to São Paulo with his wife Lina, a budding Italian architect, and the couple’s extensive art collection. MASP was founded in 1947 and Pietro remained its founding director until 1996. When São Paulo’s City Hall commissioned the construction of a new building for the museum, Lina Bo Bardi was chosen to lead the project. 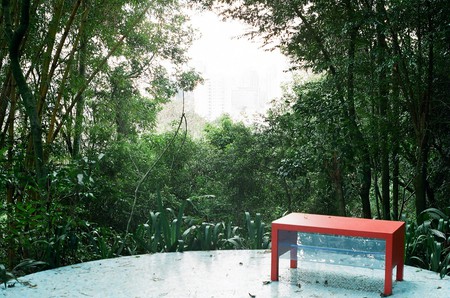 The Casa de Vidro, an example of Lina’s pure brutalist and modernist style from the beginning of her career, was her very first project. Even though she had graduated 12 years earlier in Rome, she found it difficult to become accepted in the field as a young woman. The couple lived in the Casa de Vidro until Lina’s death in 1992 and Pietro’s in 1999.

Since then, the house has been home to the Bardi Institute and houses the couple’s private collection of over 40,000 pieces, including works of art, photographs, documents and drawings. It is so extensive that it has yet to be catalogued in its entirety.

Today, the Casa de Vidro is open to visitors, with guided tours run by members of the Bardi Institute. The tour begins in the open-plan living room, with its beautiful views of the forest surrounding the house. This space often hosts temporary exhibitions from artists around the world, which are displayed alongside some of the Bardi’s original furniture, including pieces designed and built by Lina herself. 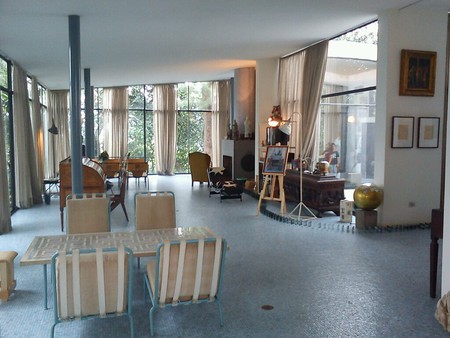 Visitors also have the chance to see the kitchen, bathrooms and other living spaces, which are all stunning and typically modernist in their design, preserved almost exactly as they were when the couple were living there. You are also able to tour the beautiful gardens, full of gorgeous vegetation and wildlife, with families of tamarins often seen jumping from tree to tree.

The tour ends in the Casinha (“Little House”), which was Lina’s workshop near the end of her career. As this was one of the architect’s last projects, it reflects the change in style in the latter stages of her life, moving away from pure brutalism and taking inspiration from other traditional styles she picked up throughout her life, particularly from East Asia. Lina’s sketches and plans for the Casinha are left on display, allowing you to see her intricate calculations, particularly in regard to the collection of rain water from the workshop’s roof. 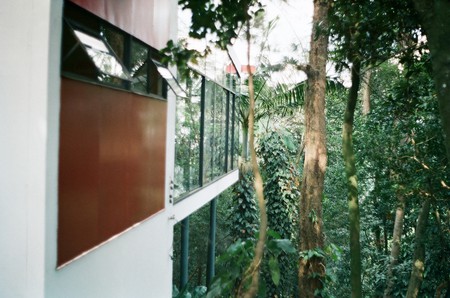 For fans of Lina Bo Bardi’s work, among the most celebrated architects in Brazil’s history, a visit to Casa de Vidro is a rare opportunity to see her interior design work, as almost all of the projects in her career were for public spaces. Lina did not have many private clients and only ever built three houses in her life, one of them being her own.

The best way to get to Casa de Vidro is by car, as the neighborhood of Morumbi is not well served by public transport, with no train or subway stations present. There are a number of buses which go down the nearby Avenida Morumbi, but be sure to plan your route beforehand so as not to get lost in what is a scarcely pedestrianized part of the city.

Casa de Vidro is open for visits from Thursday to Sunday, with the guided tours beginning at 10:15 am, 11:45 am, 2:00 pm and 3:30 pm. Tours last around an hour and a half and visits should be reseved ahead of time by emailing the Bardi Institute (educativo@institutobardi.com.br). Walk-ins are also accepted, but be aware that the guided tours may be fully booked, especially on the weekends. Tours cost R$20, with concessions (pensioners and students) at R$10. Children under 10 years old visit for free.