You Can Solve Digital Puzzles in These Brazilian Street Art Murals

Art and science are truly two sides of the same coin, as seen in a mural in Rio de Janeiro that could be the “largest urban graffiti dedicated to science, technology, and innovation.” The street art covers the walls surrounding the Brazilian Center for Research in Physics and among its scientific imagery are several challenging puzzles with prizes to be won for those that manage to unlock the answers.

Spanning the length of the institute’s walls, the street mural is 240 meters squared and it took a total of 600 hours of work, 110 liters of paint, and 324 spray cans to complete. The mural is divided into eight segments, each representing a different scientific theme. They are: abstract and mystery; curiosity and creativity; constructing knowledge; past, present, and future; from nano to macro; constructors of science; the particle that changed Brazil; and the search for more.

The project was led by Gabriela Tores, an art student at the Federal University of Rio de Janeiro who also specialized in drawing and painting at the Brazilian Society of Fine Arts. “I fell in love with the project when I realized that this interaction with the public would be unique, and we were bringing an innovative concept to this type of urban art,” says Tores in a press release. “This work allowed me to see the world differently. In particular, I realize the value of science and how it is so close to us, but sometimes we don’t even realize it.” 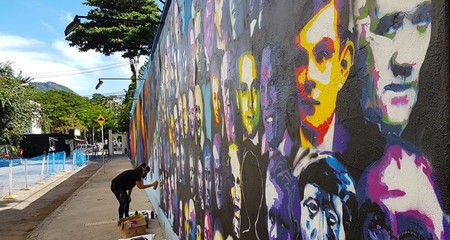 The aim of this scientific street art is “to inform, to innovate, to amuse, and to contribute to the revitalization of the public space,” says Marcio Portes de Albuquerque, senior technologist and vice director of CBPF, in a press release. One of the most important parts of the mural that achieves these objectives is the piece called “constructors of science.” Inspired by the design of the ‘Operarios‘ (1933) painting by Brazilian artist Tarsila do Amaral, this section is made up of 100 portraits of scientists throughout history who have contributed significantly to scientific developments. Among the faces is one “unknown face” which is dedicated to the people who help and contribute to science in some way or the other, such as those that work behind the scenes or who have been a part of important discoveries. 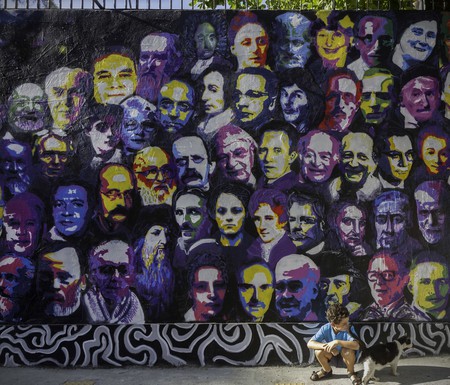 The 'constructors of science', the portraits of 100 scientists throughout history | © Luiz Baltar | CBPF

Within the mural are several hidden puzzles of varying levels of difficulties. The puzzles are based on science and technology and those who manage to find a solution can submit their answers on the CBPF website. The first person to solve the hardest problem could win a trip to the CBPF or to the CERN particle physics laboratory near Geneva in Switzerland.

Founded in 1949, The CBPF is an important research center in both Brazil and the world and has some of the country’s most important post-graduate programs related to physics. It plays a significant role in the field of theoretical and experimental research, including in particle physics, condensed matter, biophysics, astrology, and cosmology.

“This project adds to CBPF’s long tradition of bringing science to the public,” says Albuquerque. “The graffiti is a way of giving visibility to science and to draw young people’s attention to a scientific career.”