Feira de São Cristóvão |©Alexandre Macieira | Riotur/Flickr
The markets in Brazil are the best places to discover exotic ingredients, fulfilling restaurants and local produce that ranges from jewellery and clothes to religious artifacts and souvenirs. Put aside a few hours to browse around any of the following markets that are found in Brazil’s largest cities.

Market, Bar, Brazilian, Vegetarian
Municipal Market of São Paulo | ©The Photographer/WikiCommons
It’s not hard to imagine why this market has the local nickname, Mercadão (big market) – inside is a plethora of stalls that sell a vast range of food products. Exotic vegetables, colourful fruits, strong cheeses, aromatic spices and mouth-watering dried meats tease the senses and most stalls will let you sample their goods. After browsing through the labyrinth of temptation, head upstairs to the casual dining and drinking court to try the market’s most famous food item – the legendary mortadella sandwich. It’s a huge wedge of sliced meat held together by French bread.
More Info
Open In Google Maps
306 Rua Cantareira, Centro Histórico de São Paulo São Paulo, 01024-900, Brazil
+551133266664
View menu
Visit website
Visit Facebook page
Send an Email
Give us feedback

The Central Market of Belo Horizonte is renowned in Brazil and on a global scale, recognised as one of the best and most diverse markets in the world. It accommodates around 400 shops and stalls that sell anything from fresh vegetables and organic fruits, meat and dairy products, spices and herbs to sweets, cachaca, religious items, handicrafts and even live animals. Fuel up at the informal restaurants and ask for liver with jiló – it’s a local specialty. If liver is not your thing, then try the slow-cooked pork knuckle or wait until Saturday to try a traditional feijoada.

Market, Food Stall, Brazilian
Ver-o-Peso | © Hadhylima/WikiCommons
No trip to the north of Brazil is complete without sampling some of the local cuisines that are largely inspired and influenced by the nearby Amazon rainforest. To do that, head to the Ver-o-Peso market in Belém that sells a variety of produce from the Amazon. The range of fruits and vegetables that are almost impossible to put a name to is stunning, as is the incredible fish market stocked fresh from the Amazon river and the acai fair. This market offers a true immersion into Brazilian lifestyle – expect to hear little-to-no English spoken and encounter few, if any, tourists.
More Info
Open In Google Maps
Avenida Boulevard Castilhos França, Comércio Pará, 66013-030, Brazil
View menu
Visit website
Visit Facebook page
Send an Email
Give us feedback

Building, Architectural Landmark, Market, Bazaar
Mercado Modelo | © Rodrigo Suriani/Flickr
Originally inaugurated in 1912, the market has dealt with a few tragedies over the last century. After being destroyed by fire in 1969 and again in 1971, it was finally relocated before it was struck by another fire in 1984. Nowadays though it has put those terrible incidents behind it and is Salvador’s bustling spot for arts, crafts and typically Bahian products. Popular among tourists looking to pick up cheap and cheerful souvenirs, the market is especially good for sweets and bottles of oil infused with chilis.
More Info
Open In Google Maps
s/n Praça Visconde de Cayru, Comercio Bahia, 40301-155, Brazil
View menu
Visit website
Visit Facebook page
Send an Email
Give us feedback

It’s hard to contain your excitement upon entering Rio de Janeiro’s largest fair. The market is a dizzying explosion of all things that come from the northeast of Brazil including plenty of Bahian products – look out for the typical Bahian ornaments of curvaceous women. The 600 stalls offer a range of food such as herbs, spices, cachaca (distilled sugar cane), dried meats, cheese and the regional bottles of melted butter used to pour over meals. After satisfying your senses at the fair’s hundreds of stalls, head to any one of the informal restaurants to fill up on rice, beans, chips and meat cooked the northeastern way and served up in huge portions. Enjoy the live forró (a music typical from the northeast) and join in with the impromptu dancing and singing. 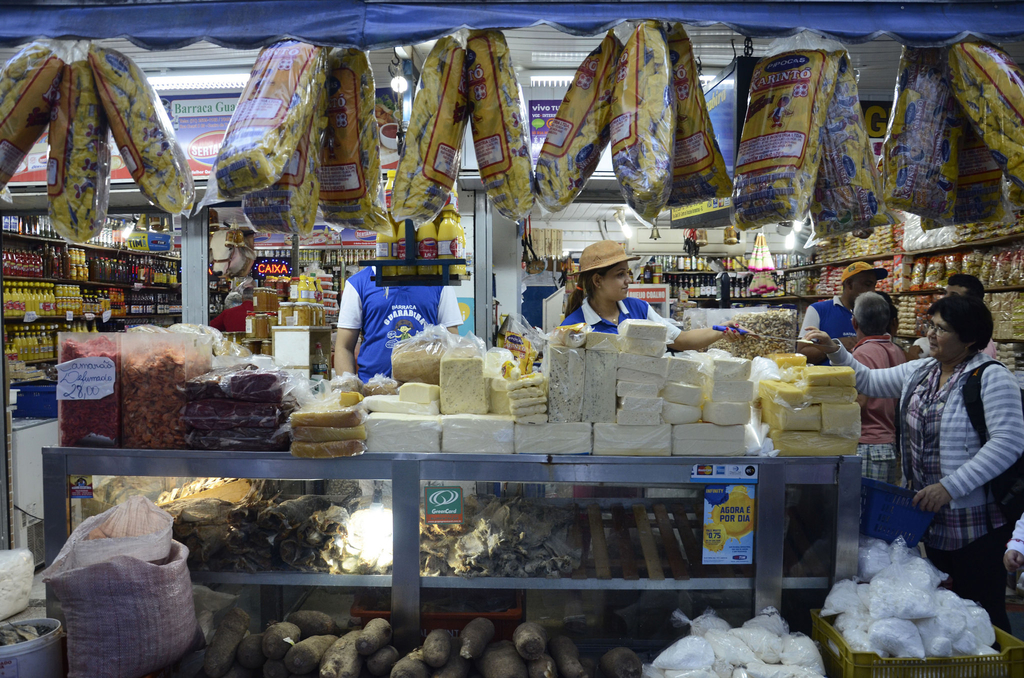 Market, Food Stall, Food Stand, Brazilian, Seafood, Fast Food
Perched on the shores of the Amazon’s vital water supply, the river Rio Negro, the Adolpho Lisboa Municipal Market is one of Manaus’s most important food and craft centres. It is also the oldest market in the city, having supplied the city with the Amazon’s produce since 1882. The market is a fascinating place to see food produce from the rainforest, especially the freshwater fish market that is restocked every day from daily catches. There are also hundreds of different fruits, vegetables, spices and indigenous products available to buy. It is one of the most authentic Brazilian markets and it has barely changed since it first opened over a century ago.
More Info
Open In Google Maps
Rua dos Barés, Centro Amazonas, 69005-020, Brazil
+5592984104593
View menu
Visit website
Visit Facebook page
Send an Email
Give us feedback
Give us feedback