Women Who Drink Beer are Happier and Healthier

Here’s some good news for women who love the odd pint of beer: according to a study at the Sahlgrenska Academy, a research center at the University of Gothenburg in Sweden, beer may protect women against the risk of heart attacks, and generally make them happier in the long run.

Scientists have discovered that drinking beer in moderation can bring significant health benefits for women by reducing their chances of having a heart attack. Their studies indicated that women who drink a beer once or twice a week reduce the risk of heart attacks by 30%, compared to those who drink high quantities of beer, or those who don’t drink anything at all. So having a pint of a Friday evening to wind down after a week at work can be doing you more good than you thought.

If your favorite tipple, however, is something that packs more of a punch, it could be having an adverse effect on your health. The research also showed a significant correlation between women consuming high quantities of spirits – which was considered to mean more than once or twice a month – and an increase in cancer deaths of almost 50%. If it’s a vodka on the rocks that you enjoy to relax, it could be better to switch that for a beer. 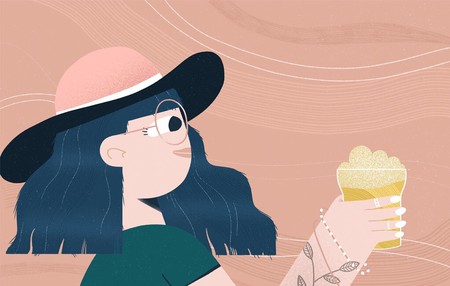 The research was published in the Journal of Primary Health Care, a scientific journal that explores and discusses all things health related. The longitudinal study was conducted for almost 50 years on a total of 1,500 women. In 32 of the years, between 1968 until 2000, the women completed a form that revealed their total consumption of wine, beer, and spirits as well as any diseases, conditions, or illnesses they had. The scientists were then able to cross-reference the data and map out patterns and trends between alcohol consumption and the risk of certain illnesses.

While drinking doesn’t need to be avoided, the research suggests that treating yourself to a beer or two every week is absolutely fine. However, it’s best to avoid spirits – and that, unfortunately, includes cocktails.