Why You Should Visit Nosso Senhor Do Bonfim Church 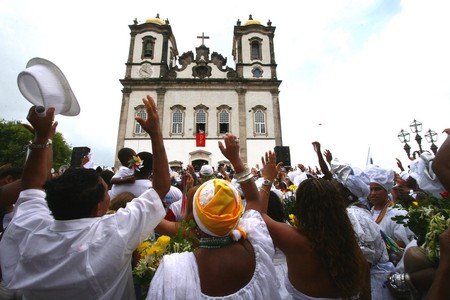 The Igreja de Nosso Senhor do Bonfim in Brazil is one of Salvador‘s most visited landmarks. Though a taxi ride away from the heart of the historical district and of no particular architectural note, its colourful past and multifaith congregation make it a must-visit for those in the area. Here’s the lowdown why this church is a sight not to be missed.

The Igreja de Nosso Senhor do Bonfim (Church of Our Lord of Good Ends), named in reference to Jesus on the cross, was inaugurated on a small hill on the Itapagipe peninsula in 1754. It had been built by a Catholic brotherhood to house a statue of Nosso Senhor do Bonfim, brought to Brazil by a Portuguese captain who survived a terrible storm at sea.

A large but relatively simple church by the standards of many in the area, it has a plain, white tiled facade, with three central doors and five windows above. The two towers that stand either side of the doors were completed in around 1772, and the detailing is rococo. 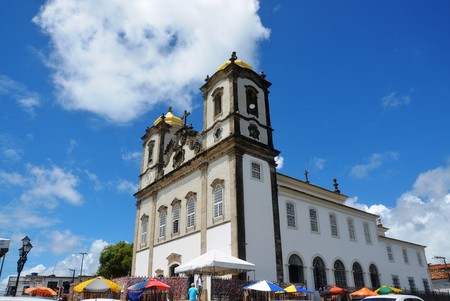 Though Nosso Senhor do Bonfim is a Catholic church, it also incorporates aspects of Candomblé, a form of worship with its roots in African Yoruba beliefs. The practice arrived in Brazil with the many slaves that landed on the country’s shores.

Candomblé, which means ‘dance in honour of the gods’, involves the worship of many orixas or gods, as well as the main deity, Oludumaré. It became entwined with Catholicism when enslaved Africans were forbidden to practise their own religion and had to adhere to that of their masters. As a result, Catholic saints and rituals became a cover for African ones. 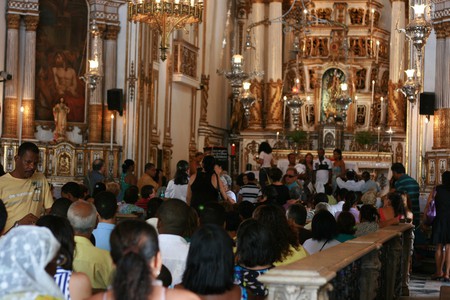 Inside, the church glitters with white and gold and silver. A scene of men thanking Bonfim for guarding their lives after a shipwreck is painted onto the ceiling, while blue and white Portuguese tiled panels in the side rooms depict other religious scenes. Visitors can sit in on the many regular services – it’s best to linger at the back and observe, though usually members of the congregation are inviting and used to seeing tourists.

On the third Thursday of January, the Lavagem de Bonfim, or Festa do Bonfim, takes place. A procession of worshippers leaves the nearby church of Conceição da Praia to walk the 8 km (5 miles) to Bonfim. There, Bahian women dressed in their traditional white lace dresses stop to wash the steps of the church with scented water as slaves did centuries before. It is an incredible sight, and many hundreds join in the pilgrimage and gather at the church to watch, feast and celebrate. 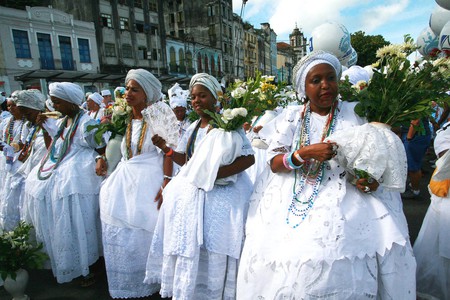 Festa do Bonfim I | © Alberto Coutinho/Secom/Flickr

For many years people have left offerings, or ex-votos, to Nosso Senhor do Bonfim on behalf of the sick and the healed. In a room to one side of the church, wax body parts hang from the ceiling grouped according to which limb or organ they represent, while the walls are plastered with photos of people who are suffering or have been cured. 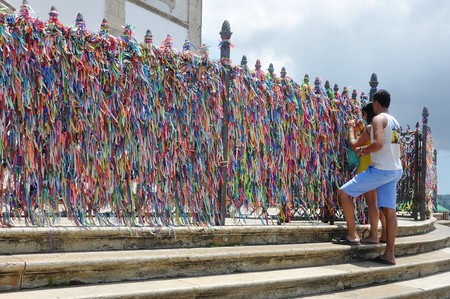 Ribbons tied to railings in Bahia I | © Turismo Bahia/Flickr

Outside the church and all over Salvador, people sell multicoloured remembrance ribbons with ‘Lembrança do Senhor do Bonfim da Bahia’ written on them, which are often seen tied to railings in front of churches dancing in the breeze. Each colour represents a different Candomblé god, and they are thought to bring luck. A wearer must have the ribbon tied around their wrist and knotted three times by someone else while they make a wish – when the ribbon falls off, the wish will come true.