Where to Watch Football in São Paulo 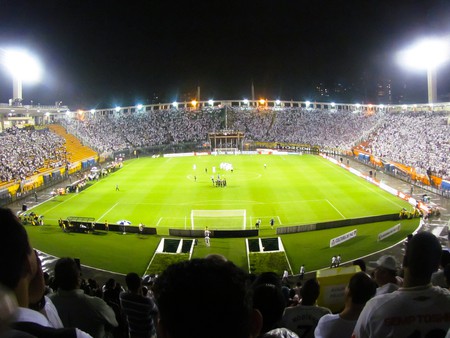 Football (or soccer, if you must) is Brazil’s national sport and nowhere is it taken more seriously than in São Paulo, the country’s biggest city. With four massive clubs in the state, as well as migrants from all across the nation cheering for their hometown teams, São Paulo lives and breathes the beautiful game. Just take a seat at any local bakery or bar and you’ll soon overhear discussions about the big match of the week. Clearly, watching football is best done at the stadium, but if you can’t get a ticket, here are some of the best places to go in SP to see the match on the big screen.

Even São Paulo, not a particularly obvious tourist city, has been unable to escape the Irish Pub phenomenon, and O’Malley’s in Jardins is the most popular. One issue with watching football in bars in Brazil concerns whether or not the place in question will have access to the correct TV channel – at O’Malley’s, this is never a problem.

With over a dozen screens and access to all sports channels available, if the game is being televised, you can watch it at O’Malley’s. As a result, this is the place to go to watch European matches, often harder to find on regular television channels. On Champions League nights, the bar can get quite rowdy, with fans of Europe’s top clubs all cheering their teams on.

Besides the football, O’Malley’s offers up decent pub grub and a good selection of imported beers from the British Isles – the least you can expect from an Irish pub in South America.

For sunny days, head down to watch the match in the central neighbourhood of Santa Cecilia. Behind the church on the neighbourhood’s main square, there is a line of bars with plenty of outside seating and screens that show the football. The square catches the sun until late afternoon, and the beer is always served cheap and cold.

Located on Rua Aspicuelta and surrounded by other hip bars, Salve Jorge is one of the best options for watching football in Vila Madalena, with plenty of screens, cold beer and good food. The area gets very busy on the weekends, so if you’ve got a particular match in mind you’d like to watch, arrive a bit early to make sure you can get a table.

Directly across the road from Salve Jorge is São Cristóvão, a traditional football bar where the walls are filled with scarves, photographs and other football-related memorabilia. The food is good (order their selection of pasteis, which are small fried pasties filled with ground beef, cheese, or diced hearts of palm) and the beer is delicious.

While they do have screens to show football, São Cristóvão is very laid back and distinctly more of a restaurant than a bar, meaning this isn’t the place to go if you are looking for cheering fans and lively atmosphere. But it is worth a visit for the memorabilia alone.

Bar, Pub Grub, Beer, $$$
Facebook
Email
Twitter
Pinterest
Copy link
Share
Map View
A classic, laid-back bar in the neighbourhood of Perdizes, Desembargador ticks all the boxes with its traditional bar food, beer on tap, television screens and a nice outside seating area. Because of its proximity to Allianz Parque, most of the clientele are supporters of Palmeiras, making this a good place to go for pre-match drinks before a trip to the stadium, or to watch matches on TV when Palmeiras play away from home.
Open In Google Maps
253 Rua Desembargador do Vale, Pompeia São Paulo, 05010-040, Brazil
+551136723676
Visit Website
Give us feedback

Bar, Grocery Store, Pub Grub, $$$
Facebook
Email
Twitter
Pinterest
Copy link
Share
Map View
One of the most charming bars in São Paulo, Mercearia São Pedro was traditionally a grocery store that served beer, but has now been transformed into a bar where you can buy groceries. The décor is decidedly old school, only modernised by the large beer fridges, the movie posters hanging from the ceiling and the flat screen televisions showing football.
Open In Google Maps
34 Rua Rodesia, Sumarezinho São Paulo, 05435-020, Brazil
+551138157200
Visit Website
Visit Facebook page
Give us feedback

While the aforementioned O’Malley’s is São Paulo’s most popular Irish pub, The Blue Pub is the city’s best-known British pub, however tenuous the differences may be from 6,000 miles away. While slightly more expensive than its Irish cousin (there is a R$40 minimum spend on Mondays and Tuesdays), the setup is essentially the same: good pub food, imported beers, and lots of television screens.

Bar, Pub Grub, $$$
Facebook
Email
Twitter
Pinterest
Copy link
Share
Map View
One of the most traditional bars in the Italian-Brazilian neighbourhood of Mooca, Elidio is another great option for watching the football. Like São Cristóvão, the walls are covered with memorabilia, including many items signed by Brazilian football legend Pelé, such as a poster representing “the greatest goal Pelé ever scored”, which took place just down the road from Bar Elidio, at the Rua Javari Stadium, in 1959.
Open In Google Maps
57 Rua Isabel Dias, Mooca São Paulo, 03119-030, Brazil
+551120213097
Visit Website
Give us feedback

This Argentinian bar in Vila Madalena is, as you’ve probably guessed from its name, best known for its empanadas, the delicious oven-baked pastries famous in Argentina and Chile. However, as it turns out, it’s also one of the best places to watch football in São Paulo, with lots of screens, comfortable seating and a lively atmosphere. Oh, and don’t forget to try the empanadas.

On a charming street corner in Itaim Bibi is the traditional Boteco São Bento, a classic Paulistano bar with wooden tables, samba, and big TV screens. In an upmarket region of the city, best known for trendy bars that wouldn’t dream of showing live football, São Bento is a breath of fresh air and a lifeline for football fans in Itaim.