Where to Find the Best Artworks by Aleijadinho, Brazil 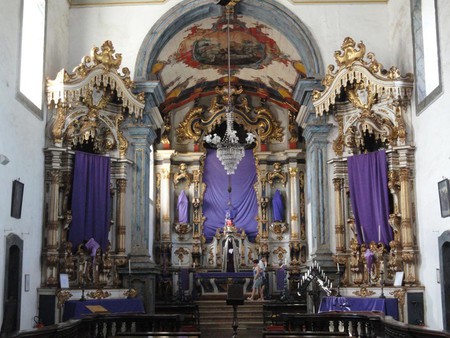 A debilitating condition left Aleijadinho disabled, yet that didn’t stop him from becoming one of Brazil’s most celebrated sculptors and architects. Born in 1738 (or 1730, historians are divided) in Ouro Preto in Minas Gerais, Aleijadinho’s most notable works are several churches in Brazil that he apparently designed with chisels and hammers strapped to his fingerless hands. Here’s where to find the best artworks by Aleijadinho in Brazil.

Located in Minas Gerais, Ouro Preto is the birthplace of Aleijadinho and a city that played a central role in the Gold Rush of the late 17th century. It’s there that most of Aleijadinho’s works can be found, especially in and on the churches.

The Church of Saint Francis of Assisi

Its construction started in 1766 and Aleijadinho designed the structure of the church and the internal decorations. It’s considered one of his greatest works. The church was added to the UNESCO World Heritage List due to its historical and artistic importance. 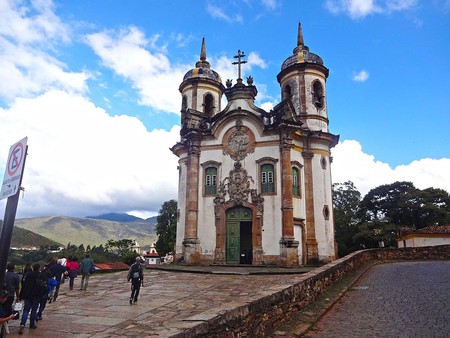 The Church of Nossa Senhora das Mercês e Perdões, sometimes known as the Church of Mercês de Baixo, was constructed between 1740 and 1772. Aleijadinho’s main contribution to this colonial church was the main chapel.

Against a mountainous backdrop, the Church of São Francisco de Paula was constructed from 1804 to 1898 and is one of the most recent churches in Ouro Preto. The baroque architecture reflects the typical style of buildings in Minas Gerais yet one thing this church has that many others don’t is a panoramic view of Ouro Preto from the churchyard. In the center of the church’s altar is an image of São Francisco de Paula, created by Aleijadinho.

The construction of the Church of Nossa Senhora da Conceição de Antônio Dias began in 1699 and underwent several modifications throughout the next century. Manuel Francisco Lisboa, Aleijadinho’s dad, played an important role in its construction and it is the final resting place of both him and Aleijadinho. Today, part of the church has been dedicated as a Museum of Aleijadinho and displays some of his paintings and sculptures. 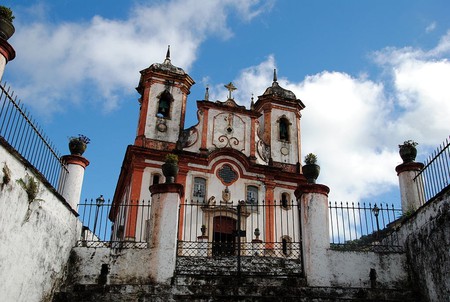 The Church of São José

Its construction began in 1752 and was only completed in 1811. Aleijadinho is credited as designing and creating the main chapel and the tower of the Church of São José.

The Church of Bom Jesus de Matosinhos, sometimes known as the Church of São Miguel e Almas, is a church from the late 18th century. Aleijadinho created some of the sculptures, notably the one of São Miguel Arcanjo at the front of the church.

The Museu da Inconfidência museum, a tribute to the unsuccessful revolt against the colonizers in 1789, contains some of Aleijadinho’s works including several images and sculptures. 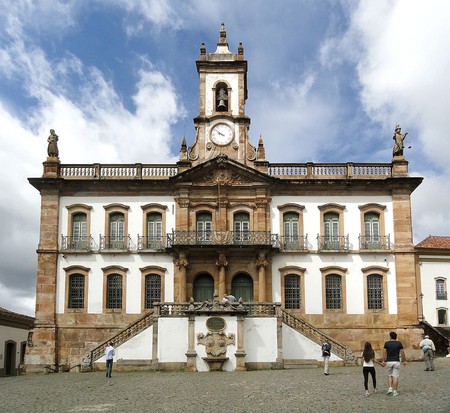 Congonhas is an historical town in Minas Gerais. It is a small town and is made up of mostly residential areas and local businesses. The main attractions are its basilica and soapstone sculptures.

This basilica – known as the Sanctuary of Bom Jesus de Matozinhos – was created by Aleijadinho and is regarded as one of his best masterpieces, especially the twelve sculptures that represent the prophets from the old testament. Made of soapstone, they surround the sanctuary’s terrace and are lifesize. The basilica was declared a UNESCO World Heritage Site in 1985.

Sabará is a small municipality in Minas Gerais. The area is mostly residential with examples of colonial architecture; it is surrounded by a picturesque mountainous landscape.

The Church of Nossa Senhora do Carmo de Sabará

This church represents an important model of barroca and rococo architecture in Brazil and was constructed in the late 18th century. Aleijadinho contributed to several parts of its construction and decoration, including the designs inside of Saint Simao Stock and Saint Joao da Cruz.

Tiradentes is a famous city in Minas Gerais, known for its colonial-era architecture and abundance of rustic restaurants and lively bars. Its most famous attraction is the Church of Santo Antônio.

The Church of Santo Antônio

This is Tiradentes’ most famous church. Its construction began in the early 18th century and gradually developed into one of the state’s best examples of baroque architecture. The inside is decorated with hundreds of kilograms of locally sourced gold, while the outside of the church was designed and created by Aleijadinho.