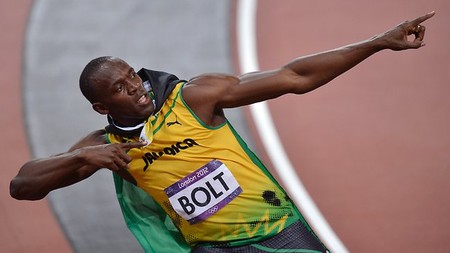 Most of the world’s best athletes reach seemingly unattainable heights because of endless hours of hard work, dedication, practice and pure talent. Yet there is another factor involved: a rival.

These athletes are head-and-shoulders above 99 percent of other competitors in their respective sports, but there seems to usually be at least one main foil to push them even higher, even greater.

Same is true in film, TV and literature.

Sprinting is no different with Usain Bolt and Justin Gatlin. The global perception is that Bolt is the hero to Gatlin’s villain, but each has needed the other in order to be his best. Bolt makes Gatlin better. Gatlin makes Bolt better.

‘He’s pushed me to be the athlete I am today, and I hope he would say the same of me,’ Gatlin said. ‘I’ve given him the best races he’s had in all of his career.’ 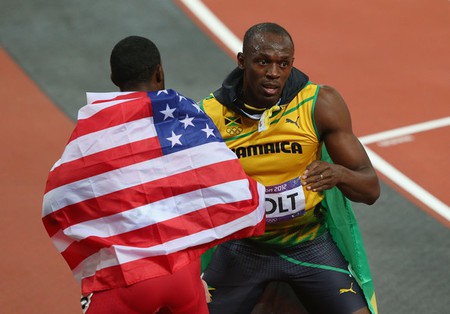 Bolt got the better of Gatlin in the 100-meter sprint at the 2016 Olympics in Rio. Bolt won a record third-straight gold medal, while Gatlin finished second.

‘I think the rivalry that I have with Usain and myself has turned into a professional wrestling feel,’ Gatlin said after the 200m semifinals. ‘You know, everyone’s cheering for Usain, but they have to have someone they’ve got to boo against.’

1. Bolt has his own restaurant in Kingston, Jamaica. Opened in 2011, Usain Bolt’s Tracks and Records ‘delivers a unique Jamaican dining experience, breaking the barriers of a casual eatery and sports bar & lounge.’

There is a casino adjoining the restaurant and a nightclub called Fiction adjoining that.

2. While Bolt has been showcasing his world-class speed since he was a teenager, oddly enough, the sprinter’s first-ever medal at any meet came in the 80 meter hurdles in Class Three at Western Champs on the campus of William Knibb Memorial High — his alma mater — in Martha Brae, Jamaica.

The bronze he won that day would be overshadowed by a slew of gold medals later in his career.

3. While Bolt racks up nearly $33 million a year according to Forbes, he isn’t just spending his money on a lavish lifestyle. He is giving back through the Usain Bolt Foundation.

According to its website, ‘The Usain Bolt Foundation is dedicated to the legacy for happy children; to enhance the character of children through educational and cultural development, as they live their dreams.’

4. What do Kim Kardashian West and Usain Bolt have in common?

They have their own emojis, of course!

Bolt introduced Boltmoji for iOS and Android in July. Fans can download and send cartoon images of the speedster, including him doing his famous ‘To Di World’ pose.

5. While Bolt, who turns 30 on Sunday, has stated he will hang up his running cleats following the 2017 World Championships, he hopes to lace up a different kind of cleat.

Bolt, an avid Manchester United FC fan, said he would love the opportunity to trial with the Premier League giants. He’s just waiting for new manager Jose Mourinho to request his services.

‘I haven’t got the call yet, but I know it’s coming,’ Bolt joked. ‘Maybe he’s waiting until after the Olympics.’ 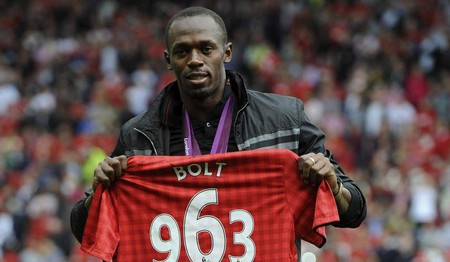 Usain Bolt holds up a Manchester United jersey with 963 on it, honoring his gold-medal winning time at the 2012 Olympics | © Flickr

1. Like Bolt, Gatlin had aspirations of playing another sport. While in high school, Gatlin dreamed of being an NFL free safety, but turned in his pads and helmet due to a lack of playing time.

Gatlin reignited his dreams to play in the NFL, trying out as a wide receiver while he was serving a ban from international competition because of doping in May 2007. He worked out with the Houston Texans and attended rookie camp with the Tampa Bay Buccaneers, but didn’t make either team. Gatlin returned to track in 2010.

2. Speaking of suspensions, Gatlin has been suspended not once, but twice, by the IAAF for doping.

Gatlin tested positive for amphetamines at the USA Junior Championships in 2001, resulting in a two-year ban. The sentence was lessened to a one-year ban after he appealed on the grounds that the substance found was from a medicine (Adderall) he had been taking since childhood to treat attention deficit disorder.

More famously, Gatlin was suspended in July 2006 after testing positive for testosterone. The initial sentence was eight years, but it was reduced to four years in December 2007. His world-record time of 9.77 seconds in the 100 meter sprint set during the qualifying rounds of the IAAF Super Tour in Doha, Qatar, was annulled.

‘Last time I checked, someone who takes medication for a disorder is not a doper,’ he said in 2015. ‘Other people in the sport have taken the same medication I had for ADD and only got warnings. I didn’t.’

3. Gatlin hasn’t only been seen on TV competing in international races. He was featured in two episodes of the show Pros vs. Joes, that aired on Spike from 2006-10.

The show pitted male amateur contestants known as ‘Joes’ against male and female professional athletes (most of whom were retired) known as the ‘Pros.’

The Purple Team featured on two episodes in the first season: Could You Tackle Herschel Walker? and Could You Outrun The Fastest Man Alive?

Gatlin ran a wind-aided time of 9.45 on the Japanese TV show Kasupe! in 2011. The fan behind him was blowing at speeds of more than 20 meters per second.

The sprinter reportedly received 2 million yen (approximately $25,000) for his appearance.

5. The apple hasn’t fallen far from the tree in the Gatlin household.

His 6-year-old son Jace is showcasing his own speed on the soccer field, according to Gatlin.

‘He’s fast,’ Gatlin said. ‘He’s already scoring three to five goals a game. He uses that speed to his advantage, for sure.’