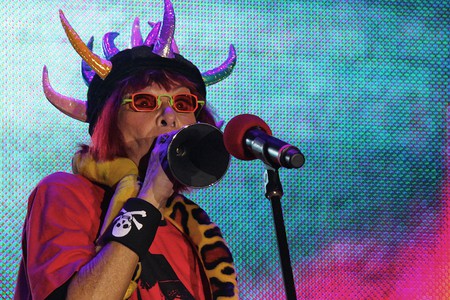 As one of the world’s most densely populated cities – and boasting a lively music culture that bears homage to its African roots – it should come as no surprise that the city of São Paulo has produced many great musicians. These five São Paulo-born performers come from all backgrounds and span several different genres, reflecting the deep musical legacy of this city in southeast Brazil.

Kleber Cavalcante Gomes, born in the southern region of São Paulo, first changed his artistic name to Criolo Doido (Crazy Criolo) before amending it to the single moniker of Criolo. Today he is one of the most acclaimed rappers and ‘urban poets’ in Brazil. Many of his songs have a political tone to them, with themes covering everything from public transportation to police brutality, poverty and racism. In 2011 his music emerged on the international scene with the release of Nó Na Orelha. In addition to rap, the album includes bolero, samba, and reggae-style songs; following the success of this début album, he has since released five others, including a live album recorded in 2013 in Rio’s Circo Voador with pieces from Nó Na Orelha. His latest album Ainda Há Tempo was released in 2016 and is available for free download from his website.

Another famous rapper born in São Paulo is Leandro Roque de Oliveira, better known as Emicida. Born in 1985, the rapper, celebrated for his unrehearsed verses, is regarded as one of the best performers of underground hip-hop in Brazil and one of the most important rappers of his generation. From his debut album in 2009 entitled Pra Quem Já Mordeu Um Cachorro Por Comida, Até Che Eu Cheguei Longe (in English, For Someone Who Has Bitten a Dog For Food, I Have Come a Long Way) Emicida has attracted hundreds of thousands of fans with his successive albums, the latest of which is entitled Sobre Crianças, Quadris, Pesadelos e Lições de Casa (in English, About Children, Hips, Nightmares, and Homework), released in 2015.

Winner of the 2016 Grammy in the Latin Jazz category, Eliane Elias was born in São Paulo but is virtually unknown in Brazil. The pianist and singer has been internationally revered since the 1980s and currently lives in the United States. Elias’ silky voice is matched by impressive skills at the piano bench; she sings both in Portuguese and in English, and her interpretation of Brazilian bossa music can be heard over a staggering 20 solo albums – making the composer/singer a fixture at jazz festivals all over the world.

Rita Lee Jones, or just plain Rita Lee, may be considered one of the first Brazilian rock singers in the country. The so-called Queen of Rock has a broad performing style that ranges from rock to pop to psychedelic and even tropicalia. As a former member of the Brazilian band Os Mutantes, Rita Lee rocked Brazilians in the 1970s, 1980s and 1990s with her unorthodox lyrics and wild stage costumes. In addition to being a singer, Rita Lee is an experienced musician and composer, producing such songs as Mania de Voce and Flagra.

Although older than the rest of the musicians on this list, Antônio Pecci Filho, known as Toquinho, is considered São Paulo’s best bossa nova and Brazilian music (MPB) representative. The guitarist, who partnered with legendary composers like Jorge Ben Jor, Chico Buarque and Vinicius de Moraes, composed famous Brazilian songs such as Aquarela and Samba de Orly. After the death of partner Moraes in 1980, Toquinho carried on releasing several hits on his own and with other Brazilian musicians. His latest album, Quem Viver, Verá was released in 2011 and has the participation of singers such as Ivete Sangalo and Zeca Pagodinho.