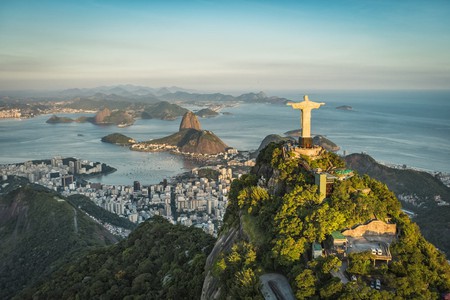 On a trip to Rio, you’re sure to hear an exciting, infectious beat that isn’t quite like anything you’ve come across before. It mixes rap and Miami bass with African-style rhythms. The result is raw, sexy, and ridiculously catchy—it’s the beat that twerking was made for.

Brazilian funk, although played throughout the country, originates from Rio de Janeiro. Every playlist is crying out for a Brazilian funk song or two. Here are 15 to get you started.

Sidney da Silva (MC Cidinho) and Marcos Paulo de Jesus Peizoto (MC Doca) form the duo Cidinho e Doca. Born and raised in the notorious favela Cidade de Deus, their music became famous for promoting peace within the unstable community at a time where funk parties were often controlled by gangs and fights were common. The song begins with the lyrics, “I only want to be happy, to walk calmly in the favela where I was born.”

“Olha a Explosão” (“Watch the Explosion”)

This song—about a girl who captivates her audience on the dance floor at baile funk parties—became the unofficial song of the 2017 Carnival in Rio de Janeiro.

MC G15 was launched into stardom with this hugely popular song that entered the funk music scene just before New Year in 2016.

This is one of the most well-known and popular funk songs from MC João, who says that funk music brought him out of poverty and helped him support his family. The song caused controversy for its strong sexual lyrics and was met with criticism for objectifying women.

MC Pikachu (aka Matheus Sampaio Correa), born and raised in São Paulo, entered the funk scene at just 15 years old and made headlines with his explicit lyrics that referenced sex and drug use.

MC TH’s 2016 “Festa da Árvore” (a sexual slang that refers a baile funk party in the favelas) was popular among the 2016-2017 holiday party season.

MC Kekel’s song Partiu (about arguing with his girlfriend) is different from many funk songs because it doesn’t make crude and sexual references.

Jefferson Cristain dos Santos Lima, otherwise known as MC Bin Laden, is a singer of funk paulista, a strain of funk music that comes from São Paulo. He was a street vendor until 2015, when “Ta Tranquilo Ta Favoravel” shot him into the national spotlight and transformed his life.

Despite being in his early 20s, São Paulo native MC Livinho has already carved out a successful career in funk music, and “Tudo de Bom” is one of his most popular songs.

MC Don Juan is another funk artist known for his controversial lyrics. He has been on the funk scene for years but made his breakthrough in 2015 and gradually rose to stardom the following year with “Oh Novinha Eu Quero te Ver Contente,” one of his most popular songs to date.

Dennis, MC Nandinho, and Nego Bam are older than many other popular funk musicians, and they claim their songs are different because they are respectful to women. “Malandramente” shot these three MCs into fame.

MC Denny is a young funk artist, and “Abraça o Papo” is one of the best-known songs he has produced so far.

Despite his young age, MC Kevinho has already made a significant mark on the funk music scene.

This 2016 collaboration between MC Zaac and MC Jerry is one of their most successful songs.

MC Brinquedo, known for his eye-catching half pink, half purple hair, is still a teenager, but is making huge waves in the current Brazilian funk scene.