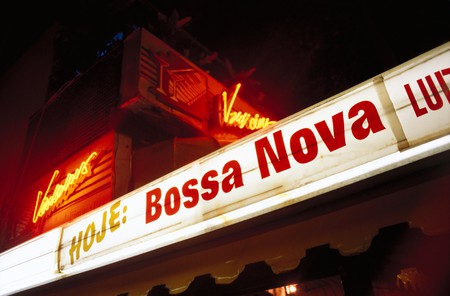 Samba may be Brazil’s most defining music from a global point of view, but bossa nova is equally important within the country. The most famous music style of the ’50s and ’60s, bossa nova infuses samba with jazz and blues to create a nostalgic yet heart-warming sound. Get immersed in Brazilian music with the best and most famous bossa nova songs, from such legends as Vinicius de Moraes, Tom Jobim, Gilberto Gil and Caetano Veloso.

Sung in a low whisper as if next to your ear, this is one of João Gilberto’s most beautiful songs. With the bare minimum of hand-played instruments, its charm lies in its simplicity. Some of the words include: “I just know I’m crazy about her / And for me she is too beautiful / And besides she is carioca.” (A carioca is someone born in Rio de Janeiro.) João Gilberto, often referred to as “the father of bossa nova” and who earned the moniker “O Mito” (“the Legend”), died in 2019. His daughter, Bebel Gilberto, has followed in his musical footsteps, advancing the genre in a slightly electronic direction. Her latest album, Agora, was released in 2020.

Arguably one of the most famous bossa nova songs, Garota de Ipanema was coined when the two artists saw 17-year-old Helô Pinheiro walking past a bar in Ipanema every day. The song became an international success and earned the artists several awards. Some of the lyrics include: “Look, what a beautiful thing / So graceful / She is the girl / That comes and goes by / In her sweet swing heading to the sea.”

This is another one of João Gilberto’s most famous songs, sung in his characteristic soft voice and accompanied with just a guitar. João Gilberto is a Brazilian singer-songwriter, recognized for his influence in creating the bossa nova genre in the 1950s. Some of the lyrics are: “When I go to sing, you will not let me / And the same complaint always comes / You say I’m out of tune, that I don’t know how to sing / You are so beautiful, but such beauty can also end.”

“Saudade” is a unique Portuguese word that it is hard to translate into English. It means a sense of longing and pain caused by someone not being near. It is also used lightly to mean “I missed you” or as a recognition that you haven’t seen a person for a long time. João Gilberto sings about saudades in its most heartfelt form. The lyrics include: “But if she comes back, if she comes back / What a beautiful thing, what a crazy thing / For there are less fish to swim in the sea / Than the kisses I’ll give on your mouth.”

Elis Regina was one of the few women that represented the bossa nova scene and was a beloved Brazilian singer until her unexpected death at the age of 36 in 1982 after a bad reaction to a mix of drugs. Aguas de Março was a collaboration between Tom Jobim and Elis Regina, yet both have sung the song individually.

Known as the muse of bossa nova, Nara Leão was one of Brazil’s most celebrated female bossa nova and MPB (Brazilian Pop Music) singer-songwriters of her time. The song uses just one note to create a samba tune. Some of the lyrics include: “How many people out there talk so much and say nothing / Or almost nothing / I have used all the scale and in the end there was nothing left / Nothing came of it.”

Formally known as Antônio Carlos Brasileiro de Almeida Jobim, Tom Jobim is among the greatest bossa nova singers of all time and is recognized as one of the leaders in its creation. His song, Corcovado, is a romantic tune and makes reference to the famous mountain in Rio de Janeiro where Christ the Redeemer stands. The lyrics include: “A little corner and a guitar / This love, a song / To make those who love themselves happy / Calm down to think / And have time to dream.”

Tom Jobim – Samba Do Avião (Samba from the Plane)

This beautiful song sung by Tom Jobim celebrates Rio de Janeiro and declares his love for the city. The lyrics include: “My soul sings / I see Rio de Janeiro, I’m missing you so much / Rio, your sea, endless beach / Rio, you were made for me / Christ the Redeemer, arms open on the Guanabara Bay.”

This wonderful collaboration combines the talents and voices of three great Brazilian artists – Vinicius de Moraes, Maria Creuza and Toquinho. Toquinho is known for his collaborations with Vinicius de Moraes, both as a performer and a composer. The lyrics include: “Me without you, I don’t have a reason why / Because without you I do not even know how to cry / I am a flame without light / Moonless garden, moon without love.”

Onde Anda Você is one of the most famous collaborations between the artists Vinicius de Moraes and Toquinho. The lyrics include: “And speaking of longing / Where have you been / Where are your eyes, that we haven’t seen / Where’s that body been / That drove me crazy with so much pleasure.”

This is another one of Nara Leão’s most famous songs that is an uplifting, pleasant song. The lyrics include: “Light of the day, party of the sun / And the little boat slides, in the soft blue sea / Everything is summer, love becomes / In the boat by the sea.”

Tito Madi is a lesser-known artist in the world of bossa nova, yet he had a few successful songs, such as Chove La Fora. His real name is Chauki Maddi, though he used a different artist name – Tito Madi – for his music career. The lyrics start with: “The night is so cold / It rains outside / And this sick nostalgia / Does not go away / I wanted to understand why you left.”

This song has been covered by almost all the great bossa nova singers, yet the version sung by Elis Regina is one of the most played and popular. The words painfully capture the feeling of being away from the one you love. The words include: “Oh, if I could make you understand / Without your love, I can not live / That without us both I’m left / Me so lonely / And I need to learn to be alone / Being able to sleep without feeling your heat / To see that it was only a dream and passed by.”

One of Brazil’s most celebrated artists is Caetano Veloso. He is most famous for his influence in the Tropicalismo genre of music and was exiled from Brazil when his music was deemed dangerous by the Brazilian dictatorship in the 1960s. He also influenced the bossa nova genre. The lyrics for this song include: “My heart never tires / Of having hope / Of one day being everything you want / My child’s heart / It’s not just the memory / Of a happy figure of woman / That passed through my dreams.”