Rio de Janeiro sunset ©Pedro Angelini
There’s really no place quite like Rio de Janeiro. The Brazilian city continues to attract millions of people every year, providing its visitors with memorable cultural experiences and many sights to behold. With famous beaches, tropical landscapes, lush rainforests and captivating history, there’s really no limit to what this sprawling metropolis has to offer. Here are 10 sights in Rio that aren’t to be missed.

For decades, the downtown district of Lapa has been known for its buzzing nightlife which attracts hordes of party-goers to its popular bars and crowded watering holes every night. However, it is also hailed as one of the most visually and culturally fascinating neighborhoods in the city. Famous for its bohemian vibe and lively social scene, it is the home of many Brazilian artists and intellectuals who gather in the shade of its quaint cafes and local restaurants during the sweltering heat of the day. Located in Lapa, visitors may also be attracted to the famous Arcos da Lapa monument, a Roman-style structure towering at 17.6 meters, and the Passeio Public, the first public park to be built in Rio. 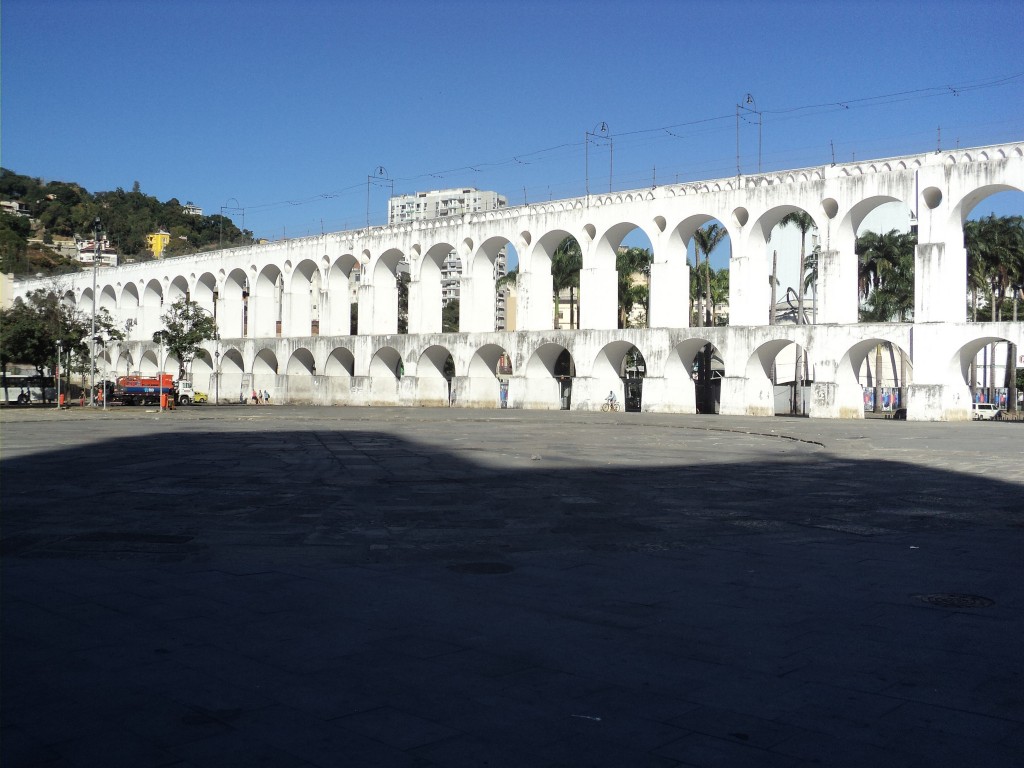 Natural Feature
Ilha de Paquetá | ©Letícia Peres
Ilha de Paquetá is a picturesque island located in Guanabara Bay. A car-free zone allowing only transport by foot, bike or horse-drawn cart, it is one of the best places to go to escape the frenzy of Rio. Admittedly the area gets rather crowded on weekends, yet during the week once the frenzy subsides, visitors can explore the scenic island in peace, marveling at the charming colonial buildings, sprawling beaches and the selection of 20 African baobabs that grow here. To get to the Ilha de Paquetá, take the boat from Praça XV (Quinze) de Novembro in Centro – the journey takes just over an hour.
More Info
Open In Google Maps
Paquetá State of Rio de Janeiro, Brazil

A peak rising up 296 meters at the mouth of Guanabara Bay and facing the vast Atlantic ocean, Sugarloaf Mountain is perhaps Rio’s most famous natural phenomenon. Although it is one of the several monolithic granite and quartz mountains in the area, it is this one that is known for its panoramic views of the city. Every 20 minutes, a glass cablecar runs along a 1400 meter route between the Pão de Açúcar and the Morro da Urca peaks, providing a thrilling 360-degree view of the surrounding cityscape. Take note that tickets are sold at the station located on Praia Vermehla and that one of the most breathtaking times in the day to visit this spectacular formation is around sunset. 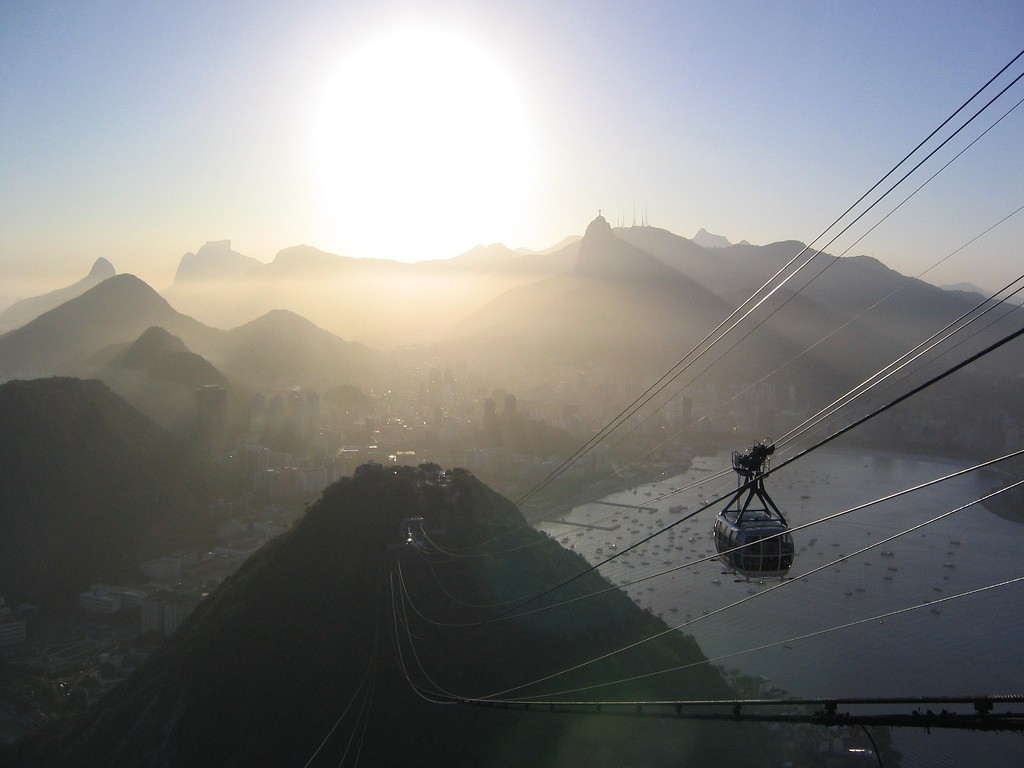 Forest, Park
© Liam Geoghegan / Flickr
Book Now
One of the seven wonders of the world, the Christ the Redeemer statue is a must-see in Rio. Built over nine years as a symbol of Brazilian Christianity, today the structure of reinforced concrete and Swedish soapstone continues to stand as one of the largest art deco statues in the world at a whopping 98 feet tall and 92 feet wide. Located at the peak of Crocovado mountain in the Tijuca Forest National Park, Christ the Redeemer provides sensational views over Rio and is undoubtedly the city’s most famous cultural icon and landmark.
More Info
Open In Google Maps
Rio de Janeiro, Brazil

Spanning an immense 137-hectare garden, the Jardim Botânico is home to more than 8000 different plant species and can be found in the affluent South Zone of Rio de Janeiro. Designed by Prince Regent Dom João back in 1808, it continues to be a highlight of the city and attracts many visitors each year who marvel at its beauty. Among some of the attractions are the rows upon rows of palm trees, the Amazonas section, a large lake filled with water lilies and the 600 species of stunning orchids that grow on the premises. Visit for a moment of tranquility amidst the hustle and bustle of Brazilian life, or to simply learn a bit about the history of the gardens.
R. Jardim Botânico, 1008, Jardim Botânico, Rio de Janeiro, RJ, Brazil +55 21 3874 1808 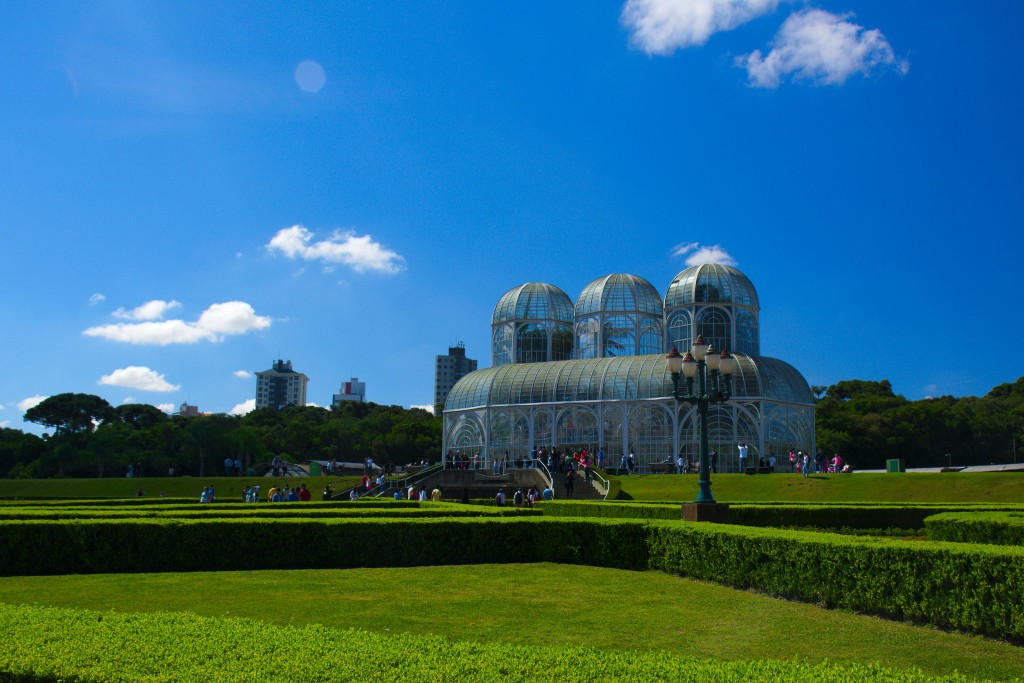 Ipanema is arguably one of Rio’s most famous surfing spots and one of the most expensive areas to live in the city, filled to the brim with world-class restaurants, elegant shops and stylish cafes. The most important part of the neighborhood though is the extensive stretch of sand along the ocean, which has transformed into a melting pot of tourists, old leftists, hippies and artists who hang out at the various postos (posts) along the waterfront. Posto 10 is known for its sport lovers, shown by the ongoing games of volleyball and soccer taking place there, whereas Posto 8 is where the favela kids roam. Regardless of where you choose to spend the day, you’ll be in for a cultural treat as you witness the various groups of sun worshipers in their prime.
Ipanema, Rio de Janeiro, RJ, Brazil 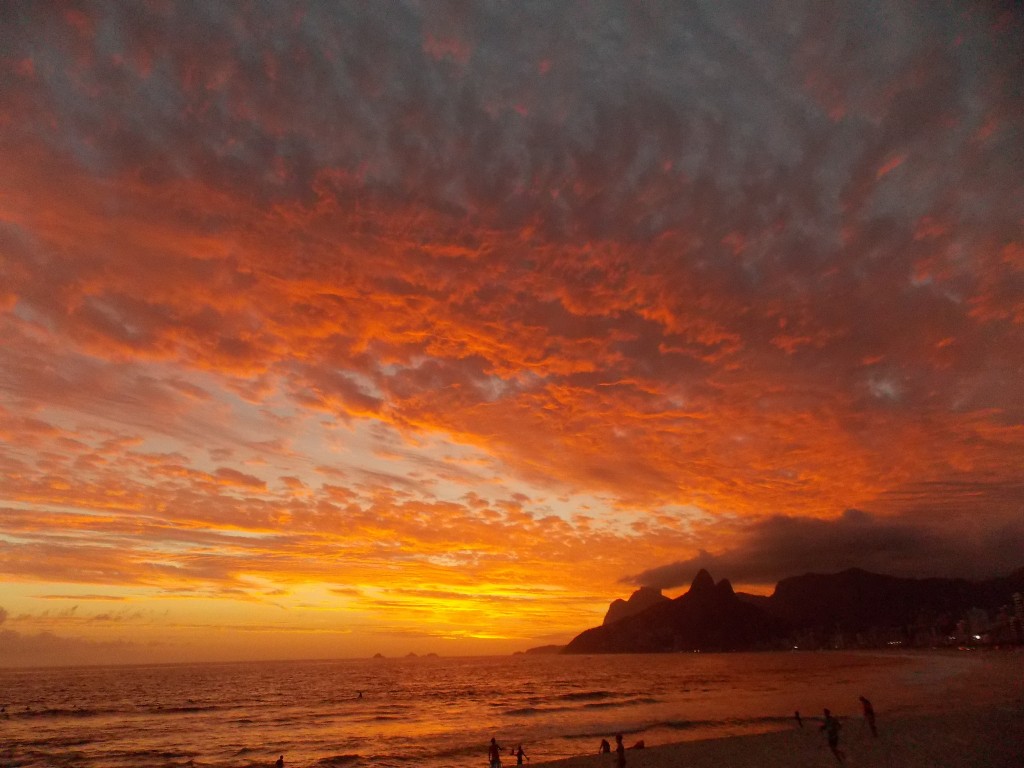 Escadaria Selarón is one of the most visited attractions in the city and it is easy to see why. Made up of 215 colorful steps leading up from the Rua Joaquim Silva, the eye-popping mosaics are Jorge Selarón’s touching tribute to the Brazilian people. The Chilean-born artist began renovations of the ruined steps in front of his house back in 1990 as a eccentric side-project – however, covering the steps with fragments of blue, green and yellow tiles and ceramics soon became an obsession. Today, they are still a work in progress and bear origins from over 60 countries around the world.
Escadaria Selarón, R. Joaquim Silva, S/N – Centro, Rio de Janeiro, RJ, Brazil 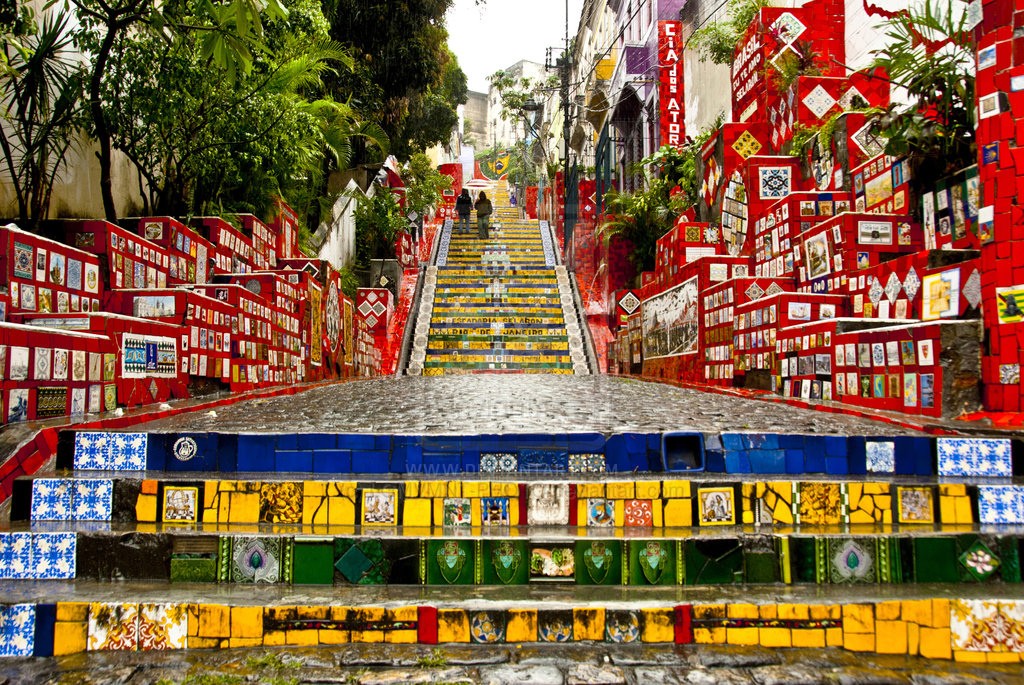 Copacabana is home to one of the most famous beaches in the entire world. Located in Zona Sul, the four kilometer balneario beach begins at Princesa Isabel Avenue and ends at Posto Seis. Every year, the waterfront plays host to million of visitors who travel to the busting beaches and the increasingly vibrant area of the promenade, rebuilt and designed with stunning black and white geometric patterns in the 1970s. For those lucky enough to be in Rio for New Year’s Eve, Copacabana is truly a sight to behold. Since the 1950s, the beach has boasted a mesmerizing firework display that is considered to be one of the largest and most impressive in the world. 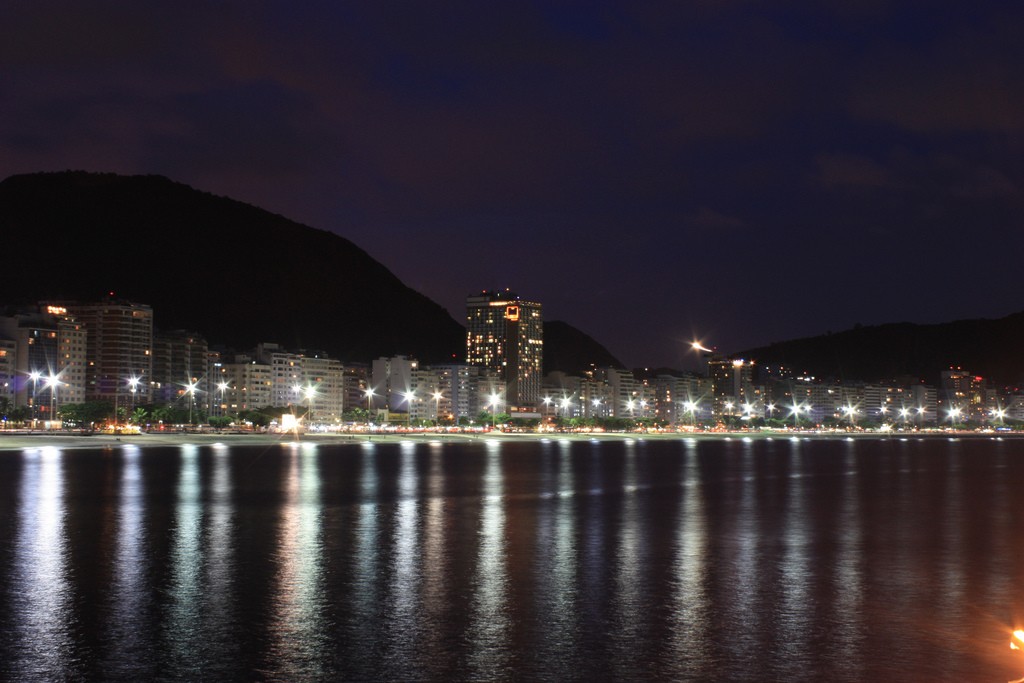 Rio de Janerio’s Santa Teresa is a quaint, bohemian district set upon one of the city’s hills. Take a stroll through the neighborhood’s cobblestone lanes and marvel at the kaleidoscope of colors created by the sidewalk mosaics, walk-in galleries and vibrant architecture of the palatial mansions in the area. Originally marked by a convent built in the 1750s, over the centuries it has become a somewhat upper-class borough and a gathering place for intellectuals, renowned artists and innovative designers. Spend the day wandering Santa Teresa’s maze of winding alleys and make sure to pay a visit to the neighborhood’s numerous museums including the Museu da Chácara do Céu and the cultural center, Parque das Ruínas.
Santa Teresa, Rio de Janeiro, RJ, Brazil 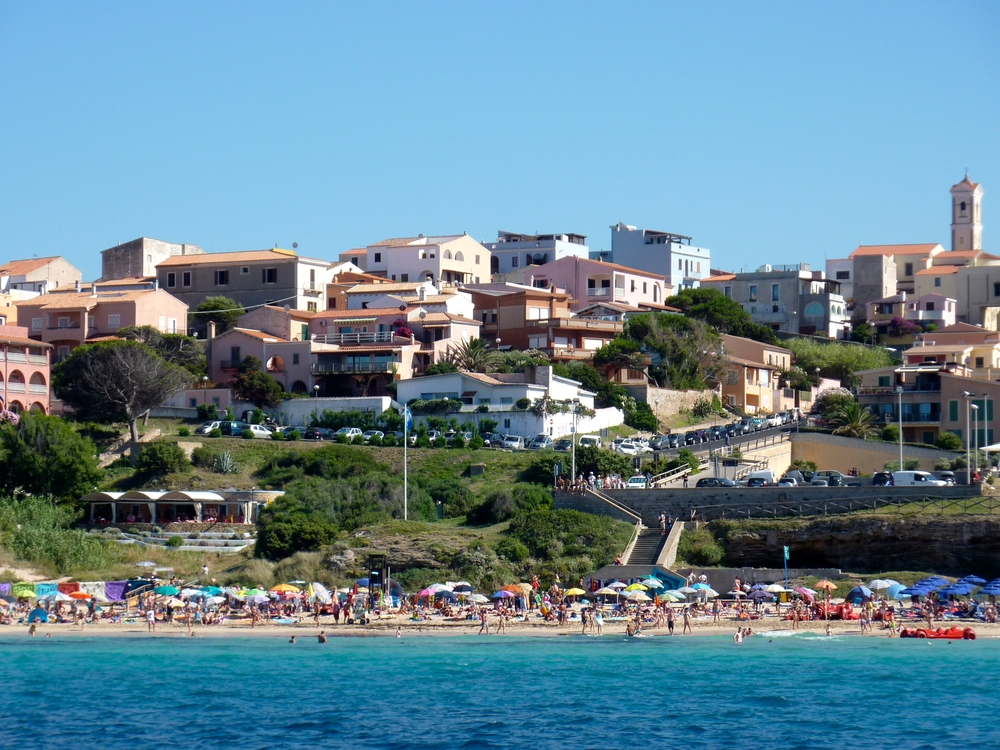 For those looking for a cultural experience out of the sun, Instituto Moreira Salles will certainly provide. The beautiful, non-profit cultural center is at the epicenter of Brazilian artistic innovation and heavily encourages the development of projects in photography, literature, the visual arts and music. In particular, visitors will be impressed by the Rio-orientated exhibitions always on offer. In fact, the IMS boasts more than 80,000 photographs of the sprawling city, giving insights into old Rio as well as it’s standing among other Brazilian cities in the country. Make sure to check out what the ever-changing program has to offer.
Instituto Moreira Salles, R. Marquês de São Vicente, 476 – Gávea, Rio de Janeiro, RJ, Brazil +55 21 3284 7400 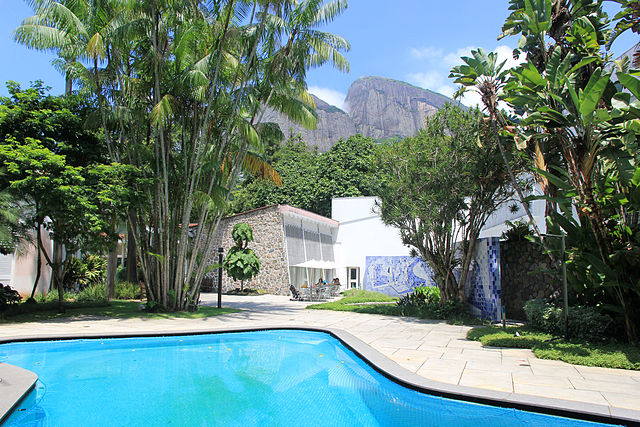